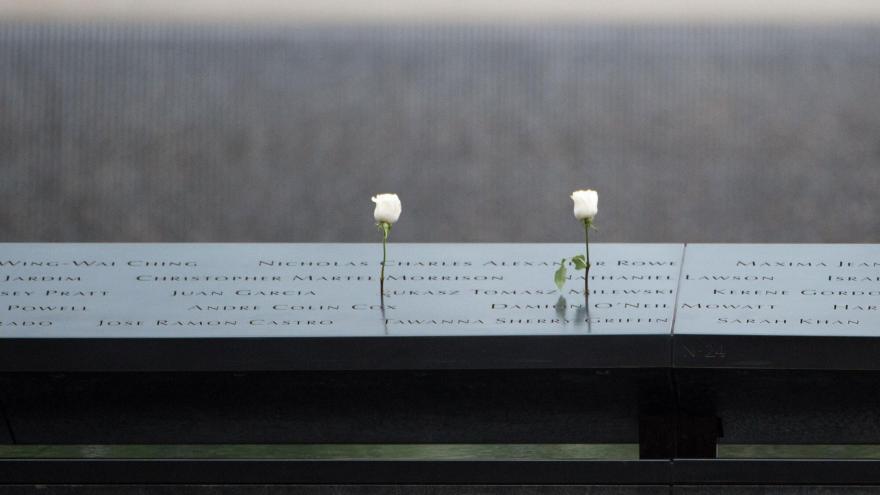 The Justice department announced that it will review what information related to the September 11, 2001, was withheld to disclose to the public, and pictured, roses at the 9/11 Memorial and Museum, on September 11, 2016 in New York.

(CNN) -- The Department of Justice announced Monday that it will review what previously withheld information or documents related to the September 11, 2001, attacks it can disclose to the public as it faces public pressure ahead of the 20th anniversary of that tragic day.

The filing from the Justice Department comes less than a week after more than 1,600 people affected by the September 11 attacks released a letter calling on President Joe Biden to refrain from going to Ground Zero in New York City to mark the anniversary of the event unless he releases additional documents and information the government has previously blocked.

A Justice Department spokesperson said Monday that the government advised a federal court in Manhattan that the FBI had recently closed an investigation related to certain September 11 hijackers.

"Although this development followed the U.S. District Court rulings upholding the government's privilege assertions, the FBI has decided to review its prior privilege assertions to identify additional information appropriate for disclosure. The FBI will disclose such information on a rolling basis as expeditiously as possible," the spokesperson said.

Biden released a statement praising the decision by the Justice Department, saying it follows through on a campaign promise of his to have the department work to release 9/11 records.

"As I promised during my campaign, my Administration is committed to ensuring the maximum degree of transparency under the law, and to adhering to the rigorous guidance issued during the Obama-Biden Administration on the invocation of the state secrets privilege," Biden said in the statement. "In this vein, I welcome the Department of Justice's filing today, which commits to conducting a fresh review of documents where the government has previously asserted privileges, and to doing so as quickly as possible."

"My heart and my prayers continue to be with the 9/11 families who are suffering, and my Administration will continue to engage respectfully with members of this community. I welcome their voices and insight as we chart a way forward," he added.

Brett Eagleson, who?lost his father?on 9/11 and is?an advocate for?many families of the victims killed in the attacks, criticized the Justice Department's filing, saying it does not go far enough toward full transparency.

"The DOJ/FBI have already had three years to 'review' the files and can act immediately to produce the documents including the unredacted 2016 FBI Review Report of the bureau's years-long investigation of Saudi government agents who 'are known to have provided substantial assistance to' the hijackers, as well as phone records and witness statements," Eagleson said.

"Just today, the DOJ finally admitted that its investigation is actually closed, contrary to the bureau's prior claims about investigative status. We hope the Biden administration comes forward now to provide the information the 9/11 community has waited to receive for 20 years, so we can stand together with the President at Ground Zero on 9/11."