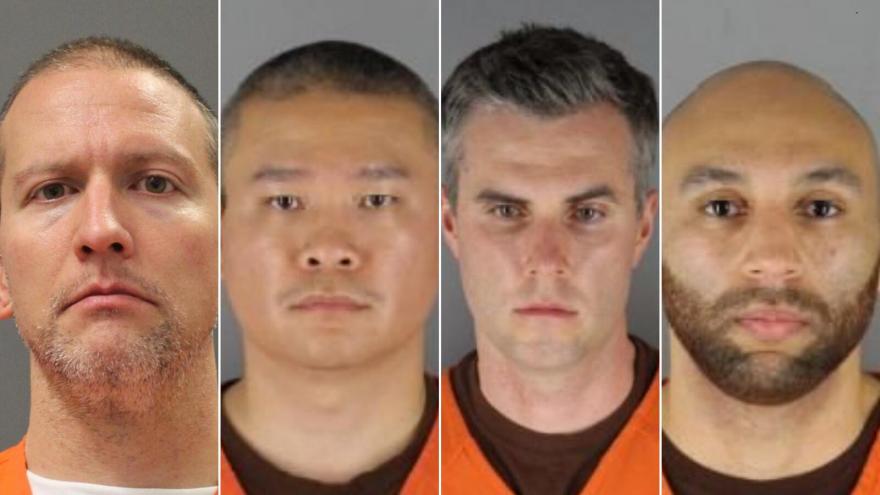 The Minneapolis Star-Tribune, citing a source, and KSTP-TV, citing sources with knowledge of the investigation, say the Justice Department intends to ask a grand jury to indict Chauvin in connection with the death of George Floyd, along with three other former officers on scene -- Thomas Lane, J. Alexander Kueng and Tou Thao.

The Star-Tribune also reported prosecutors intend to charge Chauvin in connection to the violent arrest of a 14-year-old boy in 2017.

In that case, Chauvin and a partner officer responded to a domestic assault call. In the process of attempting to arrest a 14-year-old, Chauvin hit the teen with a flashlight multiple times before applying a neck restraint with his knee until the 14-year-old lost consciousness, according to court documents filed by state prosecutors.

According to those same documents, "The child began repeatedly telling the officers that he could not breathe, and his mother told Chauvin to take his knee off her son."

The DOJ declined to comment on the local reports when contacted by CNN. CNN reached out to attorneys for all four officers. Only the attorney for Keung responded, and the attorney declined to discuss the reports.

The reports come just over a week after Chauvin was convicted of state charges related to Floyd's death, including second-degree unintentional murder, third-degree murder and second-degree manslaughter.

Bystander video showed Chauvin kneeling on Floyd's neck and back for 9 minutes and 29 seconds while the 46-year-old Black man, handcuffed and lying prone on the street, gasped for air, telling the officers, "I can't breathe."

Floyd's death on May 25, 2020 sparked protests nationwide against police brutality and racial injustice.

Chauvin is scheduled to be sentenced in June, according to the court docket.

CNN had previously reported the DOJ was investigating Floyd's death. During Chauvin's trial, the Hennepin County medical examiner testified he had also testified before a federal grand jury in February and had previously been interviewed by representatives of the US Attorney's office.

After the jury handed down the guilty verdict in Chauvin's trial, Attorney General Merrick Garland announced DOJ had launched a federal civil probe into policing practices in Minneapolis to determine if the Minneapolis Police Department has a "pattern or practice of unconstitutional or unlawful policing."

The investigation will be handled by the Justice Department's civil rights division and the US Attorney's Office for the District of Minneosta and will assess whether the department uses excessive force, including during protests, or engages in "discriminatory conduct," and if "its treatment of those with behavioral health disabilities is unlawful," Garland said.