Domestic violence victim: Get our while you can 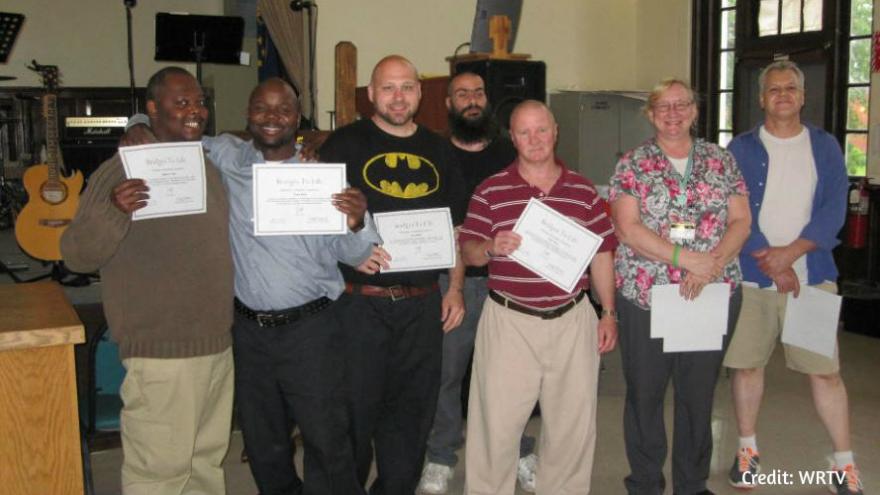 Indianapolis, Indiana (WRTV) -- For a moment, Sara Slinker thought God himself had brought her and Todd together.

Their first “meeting” was unusual enough. A friend of her son’s asked if Slinker would be willing to write letters to another man, Todd Brinson, he was serving time with behind bars.

Since he was in prison on what she thought was a simple battery charge, she agreed. Recently out of a 20+ year marriage and with her adult sons starting lives of their own, Slinker had the time to provide some human comfort to a man paying his dues to society.

Over time, Slinker opened up to Todd and shared her story with him. Their relationship blossomed from budding pen pals into something romantic.

Ten months later, in September 2010, Todd was released from prison and moved in with Slinker.

“When we first got together it was wonderful,” Slinker said. “He went to church with me every Sunday. He read my Bible devotions with me. He read Scriptures with me every morning. The first time we met were inside the chapel at IREF (Indianapolis Re-Entry Educational Facility). I felt like God was blessing that relationship. But that’s not at all what it was. God gave me the signs. Sadly, I chose to ignore them.”

On Sept. 18, 2011, Todd’s family took everyone out for dinner to celebrate his one-year anniversary of release from prison. Three days later, Todd’s father called Slinker and said he was worried his son had been drinking.

“I said, no, Todd isn’t drinking,” Slinker said. “And then I discovered an empty bottle of vodka in the refrigerator.”

Slinker told Todd he had to leave her apartment immediately and go back to his place. That was the moment the honeymoon phase ended.

“He refused and picked me up, threw me across the room, and for the next 45 minutes beat me in every room of the apartment,” Slinker said.

The beating only stopped when the police arrived after Slinker’s neighbor, hearing her cries for help, called 911.

Todd was arrested and charged with battery, aggravated battery, criminal confinement and strangulation.

He pleaded guilty to the strangulation charge and was sentenced to 2 years in the Indiana Department of Correction. He was released in September 2013 – only to return less than 60 days later after violating a no contact order when he called Slinker about getting his Beanie Baby collection back.

“Good reason to go back to prison, and that’s exactly what he did,” Slinker said. “I violated him for that. He spent another seven months in the department of correction. Got out in July of 2014 and took him less than two weeks to violate the no-contact order that time.”

By that point, Slinker had begun sharing her story in prisons – starting with the original facility Todd had been serving time in – with a program called Bridges to Life.

When Todd got out again, Slinker agreed to drop the latest violation against him if he agreed to return all the letters she’d written him to be destroyed and to delete her contact information. He agreed.

“I did not ever hear from Todd Brinson again,” Slinker said.

But, she did keep telling her story.

From victim to survivor

The Bridges to Life program began in Houston, Texas, and has since expanded to Washington state and Indiana.

The program brings victims of crime – including, but not limited to domestic violence – into prisons to share their stories with offenders and other victims. The goal is to help offenders understand how their crimes have affected their victims and the underlying issues that led them to violence.

For Slinker, the program also helped her heal from the trauma she’d experienced.

“At that time in 2014 when I first started speaking, I was still a victim,” Slinker said. “Thanks to working through the program of Bridges to Life, alongside the inmates I work with each week during our 14-week session, it has helped heal me. It has helped transform me into the survivor that I am today.”

Slinker isn’t the only one who shares her story during the class – the inmates also have to open up.

“That’s a scary thing for them,” Slinker said. “They don’t necessarily want the other inmates they’re sharing a cell or dorm with to know why they’re in prison. And a lot of times they are very closed-minded, they don’t want to share. But after we bring in a couple of other victims to share, they start realizing they have a lot in common with the other victims. We break the room down into offenders and victims and ask them to share their emotions. What we find is the offenders and victims have a lot of the same emotions.”

“What I see with this program, and what I hear all the inmates talk about, is what a difference this made for them,” Slinker said. “That they can see that change is possible. That turning their lives around is possible. And staying out of prison is possible too.”

In some of the men she talks to, Slinker says she says the same issues Todd had.

“It’s a cycle. I truly believe it’s a cycle,” she said. “A lot of these abusers were abused themselves as children or watched their mothers be abused. Also drugs and alcohol are another reason. The night Todd beat me he’d drank a fifth of vodka and he’d also taken 3,000 mg of hydrocodone.”

Another common theme, Slinker says? Anger. Anger like the kind that was eating up Heath Eppard when he first went through the program.

“The last thing I told my oldest son before I left was a lie,” Eppard remembered.

Eppard, 30 years old and once again facing forgery charges, was seeing his son off to school before a court date in February 2013. After court he was going back to prison.

“He asked me, ‘Daddy are you going to be home when I get home?’” Eppard said. “And I said, ‘Yeah buddy, of course I am…’ knowing good and well that I’m going to court and I’m not going to be home. But I knew if I told him that he wouldn’t have gotten on the bus that day and things just would have been worse.”

“For a while there was a lot of trust issues with my oldest and with my middle child, my daughter,” Eppard said.

It wasn’t Eppard’s first stint behind bars. He’d been incarcerated before for theft and forgery. This time was different, though, because his children were old enough to understand what was happening.

“The first time I was in prison it wasn’t that bad because my children were a lot younger then, so they didn’t really know what was going on. But this last time was a lot harder,” he said. “To see their dad get in trouble again and have to leave again.. I actually went a number of years without being able to see my children.”

Eppard’s youngest son was just 5 weeks old when he left for prison the last time.

“He didn’t even know who I was until after I got home.”

All that was rumbling through his head when Eppard took his first Bridges to Life class in prison. He would eventually take the class several more times – even going back after his release to share his story with other men.

For Eppard, Bridges to Life wasn’t about violence he’d committed to his loved ones – but it was about learning how they were, nevertheless, the victims of his crimes.

“A lot of us have the same feelings and have been through the same things as far as having to leave our wives and children. That break is never an easy one, ever,” Eppard said. “[Bridges to Life] is about dealing with the stuff you’ve done. It’s about dealing with how you’ve made your family feel. I understand they’re not your direct victim, but they’re victims of your circumstances. Now you’re gone, and even though they had nothing to do with what caused you to leave, now they have to deal with you being gone and not having a dad for daddy-daughter dances and all the events your dad should be able to be at. It’s about how to not hate yourself for what you’ve gone and how to forgive yourself so you can move on and rebuild relationships with your family members.”

By the time Eppard was released in November 2016 he was in a different place mentally. Within four days of getting out he had a job lined up. In the 14 months since, Eppard has worked to repair his relationships with his family and has stayed out of trouble with the law.

For much of that success, Eppard credits Bridges to Life.

Helping offenders understand the impact of their crimes isn’t the only reason Sara Slinker shares her story. She also hopes it will prevent other women from going through what she did.

Last year in Indianapolis, 32 women were the victims of criminal homicides. Where motives are known, half have been linked to domestic violence. Nationally, about half of all female homicide victims are killed by an intimate partner.

When Slinker hears those stories, she thinks about how it could have been her – and about all the signs she overlooked. Some of them she even interpreted as romantic.

“When Todd and I first got together, he wouldn’t let me go to the grocery store alone,” Slinker said. “After 25 years of marriage and raising kids and always doing the grocery shopping alone, I loved the fact that he wanted to go to the grocery store. When I went to buy clothing he wanted to go to tell me what he thought of it after I tried it on. I thought of those as caring things at first, but in retrospect, those were all issues of control. He didn’t want me out of his sight. He didn’t want me around other people unless he was there.”

And there were other, less-subtle signs.

“Broken laptops, broken cellphones. The one night that I woke up to him repeatedly slamming one of the cats’ tails in the door as the cat was screaming bloody murder,” Slinker said. “Those signs were there, but I was in that honeymoon phase. That bliss. I was in love and I wanted a good relationship, and I thought I had it. But he was all fake.”

After her assault, Slinker learned, to her horror, that she wasn’t Todd’s first victim. In fact, he’d been in prison when she first met him not for beating his ex-wife’s uncle, as he’d told her, but for beating his wife so violently she’d had to be transported by medical helicopter.

“On that fateful night he beat her so severely with a mag flashlight that she had to be Lifelined to Methodist hospital,” Slinker said. “Her jaw and skull had to be reconstructed.”

For Slinker, it was God – who, she says, was giving her signs all along she didn’t see – that remained her constant.

“God is what’s gotten me through this,” she said. “God is the only man who’s never given up on or forsaken me.”

Her message for other women who find themselves in situations like she did is simple: get out.

“Get out. Get out while you can,” Slinker said. “Look for friends who will support you, family members. But cut all ties with abusers and everyone to do with them. Because if you get right back into that situation you might not come out alive.”