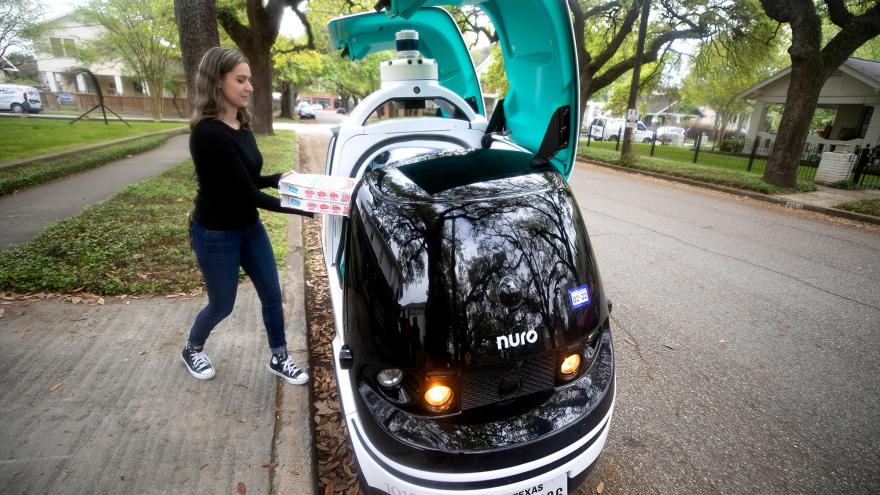 (CNN) -- The robots are coming, and they're bringing pizza.

This week, Domino's is rolling out a robot car delivery service to select customers in Houston. For those who opt in, their pies will arrive in a fully autonomous vehicle made by Nuro.

Here's how it works: Customers in the Woodland Heights neighborhood of Houston can choose robot delivery and receive texts with updates on the car's location and a numerical code that can be used to retrieve the order. Once the car arrives, the customer enters the number on the bot's touchscreen, and the car doors open up to serve the food.

This isn't Domino's first foray into the world of autonomous deliveries. In 2017, the Michigan-based company used a self-driving Ford Fusion hybrid to deliver pizzas to randomly chosen customers in Ann Arbor, Michigan. And in 2013, Domino's tested out pizza delivery via drone in the United Kingdom.

While these experiments are useful to get the ball rolling when it comes to innovation and building buzz for the brand, consumers shouldn't expect a seismic shift in the way food is delivered. For now, at least.

"There is still so much for our brand to learn about the autonomous delivery space," Dennis Maloney, Domino's senior vice president and chief innovation officer, said of the new initiative. "This program will allow us to better understand how customers respond to the deliveries, how they interact with the robot and how it affects store operations."

Domino's isn't the first pizza chain to play around with this technology. In 2018, Pizza Hut announced that it was working with Toyota to release a fully autonomous delivery vehicle.

But self-driving vehicles are far from mainstream. For years, self-driving car companies operated under the belief that their technology and current road infrastructure would be enough. But self-driving has proved harder to get off the ground than expected. Companies have missed deadlines for deployments, and the industry has consolidated, with even a company as big as Uber selling its self-driving vehicle program.