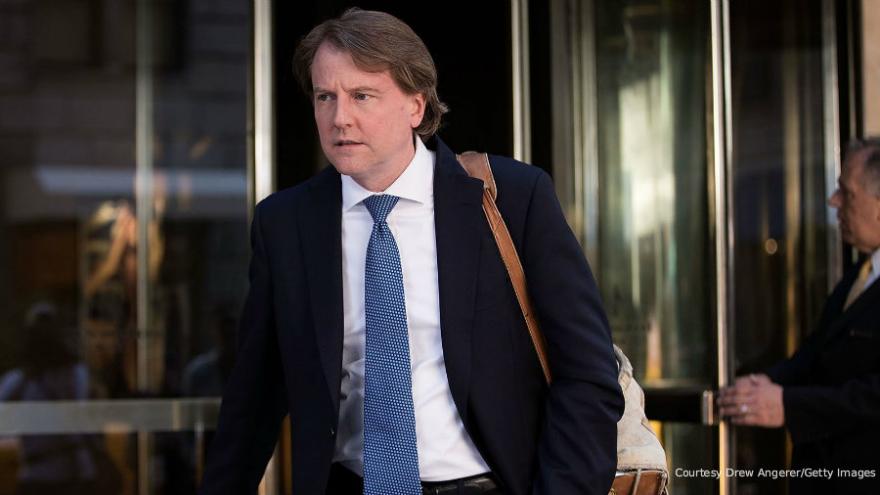 A White House official and a source with knowledge of the matter confirmed his departure to CNN.

McGahn has been planning to leave the White House, but a source told CNN his departure was expedited after President Donald Trump said Tuesday he had selected Patrick Cipollone as his successor.

McGahn leaves his post after serving as White House counsel through the tumultuous first 18 months of Trump's presidency, steering the White House's handling of the Russia investigation and responding internally to the President's mercurial moods as the investigation ballooned.

His departure is another one from the handful of top aides who worked on the Trump campaign before joining the White House. McGahn served as the Trump campaign's top attorney throughout the GOP primary and 2016 presidential election, becoming a trusted adviser to the future President in the process.

But McGahn immediately faced controversy in his earliest days at the White House, beginning with acting Attorney General Sally Yates' warning to McGahn that then-national security adviser Michael Flynn could be blackmailed by Russia and that he had likely lied to Vice President Mike Pence. Flynn was forced to resign after reports revealed Yates' warning to McGahn about Flynn's conduct.

As the Justice Department and congressional investigations into Russian meddling in the 2016 election heated up, McGahn found himself increasingly at the center of Trump's and the White House's response to the investigation.

And when Attorney General Jeff Sessions faced pressure to recuse himself, Trump enlisted McGahn to urge Sessions not to take that step. Sessions eventually did recuse himself, giving his deputy, Rod Rosenstein, the ultimate authority to appoint a special counsel.

McGahn threatened to resign in the summer of 2017 after Trump ordered him to fire Robert Mueller, the special counsel investigating potential collusion between the Trump campaign and Russia's election meddling and questions of obstruction of justice.

For McGahn, the President's order to fire Mueller was a bridge too far -- with the White House counsel refusing to follow through on the order, a person familiar with the matter told CNN. The New York Times first reported Trump's move to fire Mueller and McGahn's refusal to carry out the order.

The slew of incidents involving the President and McGahn amid the Russia investigation made the White House counsel an important witness in Mueller's investigation, with McGahn sitting for interviews with Mueller's team in December.

Before joining the Trump campaign and the White House, McGahn worked at the powerful DC law firm Jones Day and previously served as a commissioner on the Federal Election Commission.