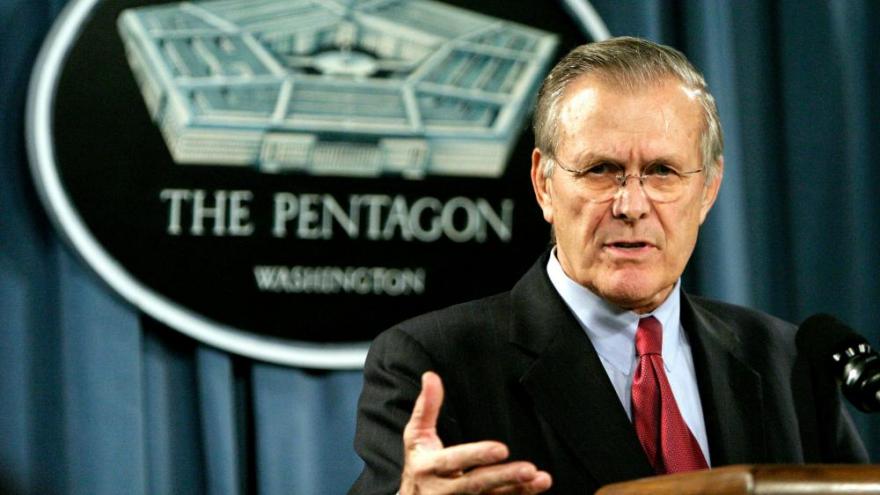 Defense Secretary Donald Rumsfeld gestures during a joint press conference with Russia's Minister of Defense at the Pentagon on January 11, 2005, in Arlington, Virginia.

(CNN) -- Donald Rumsfeld, the acerbic architect of the Iraq war and a master Washington power player who served as US secretary of defense for two presidents, has died at the age of 88.

The pugnacious businessman, bureaucrat and former lawmaker helped drag victims out of the burning Pentagon on September 11, 2001. The al Qaeda attacks heralded the War on Terror and years of foreign entanglements that he directed and that ultimately ended his political career when they went sour.

Rumsfeld died surrounded by his family in "his beloved Taos, New Mexico," according to a family statement. No cause of death was immediately provided.

A long-time associate of former Vice President Dick Cheney, Rumsfeld made a shock return to the Cabinet when he was named to run the Pentagon by the inexperienced new President George W. Bush, who took office in January 2001.

He had previously served in the role for President Gerald Ford in the 1970s and history will remember him as the youngest and the second-oldest defense secretary.

Rumsfeld had an effervescent personality and could be mischievous and cocky, though critics -- including some in the Bush administration -- regarded him as arrogant and a bully.

His Washington legacy is dominated by the Iraq war.

Rumsfeld refused to accept blame for or repudiate the conduct of the conflict when conditions deteriorated and US troops faced a vicious insurgency -- after the weapons of mass destruction on which the Bush administration had used to justify the invasion in 2003 never materialized. His decision to insist on a "light footprint" for US troops was blamed by many critics for the collapse of the Iraqi state after the US invasion -- conditions that fed the insurgency and fractured security. Many of his antagonists also held Rumsfeld responsible for the detainee abuse scandal in the Abu Ghraib prison near Baghdad that severely tarnished America's reputation abroad.

According to a number of contemporary accounts and memoirs of key players, the then-defense secretary was quick to advise Bush to target Iraq after 9/11 -- even though al Qaeda had been sheltered by the Taliban in Afghanistan and Iraqi leader Saddam Hussein had nothing to do with the terror attack.

He had also predicted that a conflict that in the end dragged on for years would be a short war. US troops did topple the Iraqi regime within weeks but Rumsfeld's critics accused him of having no plan for the aftermath of the invasion.

Rumsfeld died in the week in which President Joe Biden is expected to complete US involvement in the conflict in Afghanistan, which was launched while Rumsfeld was at the Pentagon and is America's longest war.

Bush praised Rumsfeld in a statement on Wednesday as an "exemplary public servant and a very good man." Rumsfeld, Bush said, "never paled before tough decisions, and never flinched from responsibility. He brought needed and timely reforms to the Department of Defense, along with a management style that stressed original thinking and accountability."

In his second go-around in the Pentagon, Rumsfeld was known for a confrontational attitude toward military brass and the press. Making the WMD case against Iraq, he produced one of his most notorious quotes in 2002.

During the war on terror, which came to dominate Washington and US diplomacy early in the 20th century, Rumsfeld formed a fearsome duo with Cheney, driving hardline policies that sometimes tested the Constitution and a unilateral approach that infuriated US allies in what he derided as "old Europe."

Rumsfeld used to bury fellow members of the administration and subordinates in the Department of Defense with pointed and often critical notes that quickly became known as "snowflakes."

He resigned from the Bush administration in late 2006, paying the price for the deterioration in Iraq, which contributed to Democrats seizing back the House and Senate in midterm elections -- and eventually paved the way for Barack Obama's presidency.

As he accepted full military honors before leaving, he defiantly warned against watering down the neoconservative policies that led the US into Iraq.

"A conclusion by our enemies that the United States lacks the will or the resolve to carry out missions that demand sacrifice and demand patience is every bit as dangerous as an imbalance of conventional military power," he said.

Cheney used his friend's retirement ceremony to praise him as an ideal public servant from whom he learned how to play the inside game in Washington while Rumsfeld was chief of staff to Ford.

"I've never worked harder for a boss -- and I've never learned more from one, either. Don is a superb executive who knows how to cut through to an issue at once. He embodies the adage that a statesman should act as a man of thought, and think as a man of action."

Rumsfeld's first term as defense secretary was dominated by the Cold War and he oversaw the development of many of the weapons systems that helped the United States ultimately triumph over the Soviet Union. He was seen as a reformer who did much to modernize the department.

After Ford lost the 1980 election to President Jimmy Carter, Rumsfeld went into the private sector and carved out a reputation as an cost-cutting executive who shook up tired institutions -- one reason Bush chose him to return to the Pentagon.

Earlier in his career, the Chicago-born Rumsfeld was a US Navy pilot after graduating from Princeton and served as a congressman from Illinois. He served as President Richard Nixon's ambassador to NATO before returning to Washington to be Ford's chief of staff.

For all the controversy of his second tenure, Bush said Rumsfeld always looked out for the warfighters below him in the chain of command.

"As Commander in Chief, I especially appreciated how Don took his job personally and always looked out for the interests of our servicemen and women. He was a faithful steward of our armed forces, and the United States of America is safer and better off for his service," Bush said.

Rumsfeld married his wife Joyce, who survives him, in 1954.

"History may remember him for his extraordinary accomplishments over six decades of public service, but for those who knew him best and whose lives were forever changed as a result, we will remember his unwavering love for his wife Joyce, his family and friends, and the integrity he brought to a life dedicated to country," the Rumsfeld family statement said.