'Don't put your kids' lives at risk': US ramps up ad campaign in Latin America fighting against disinformation 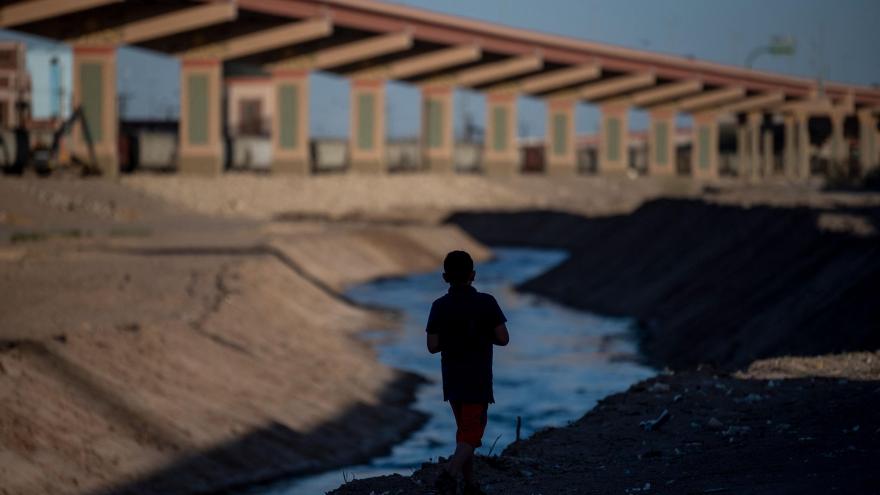 The Biden administration ramps up ad campaign in Latin America to fight against disinformation. This image shows a boy walking along the Rio Bravo across the border from El Paso, Texas on March 22. - Pedro Pardo/AFP/Getty Images

(CNN) -- The Biden administration has placed around 28,000 radio ads in Latin America as part of a stepped-up campaign to discourage people from journeying to the US. But amid a dramatic spike in migrants to the southern border, many of whom have been lured by false information and rumors from smugglers, it's not clear the ads are resonating.

At first, the message from the US government seems subtle. Set against a soft melody, a roughly 45-second radio ad running in Guatemala features a conversation between two men -- one who wants to join a caravan to travel to the US with his child and another trying to talk him out of it.

The man wishing to leave says that it's easier to cross the border with a child, but his friend quips that he's wrong and lays out the dangers of traveling north, saying they can be assaulted, kidnapped or killed, and run a higher risk of contracting coronavirus.

"Don't put your kids' lives at risk based on false hopes," the man argues, according to audio of a radio ad shared with CNN. A narrator then steps in to say people can get ahead in Guatemala, beseeching people not to leave and put their family at risk.

The ad is among the thousands like it placed by the US into media markets in Brazil, El Salvador, Guatemala and Honduras since January. The spots, which are recorded in Spanish, Portuguese, and six indigenous languages, have reached at least 7 million Central American radio listeners via 133 radio stations, according to a State Department spokesperson, who added the scripts are derived from real-life testimonials. The US is also using social media to relay the administration's message.

Fighting against multiple incentives to come to the US

The ad campaign is designed to combat a range of factors driving migrants to the border, including a slew of misinformation being spread by smugglers and the widespread belief among migrants that under the Biden administration, border enforcement has been relaxed and the US is more welcoming to immigrants. That's a powerful incentive for many Central American migrants, who are seeking to escape a region best by troubles, including violence and the economic devastation wrought by the pandemic and two hurricanes last year.

"Obviously there's a push factor and a very strong one, especially after the hurricanes last year, the Covid pandemic and obviously the lack of opportunity in certain areas," Guatemalan Ambassador to the US Alfonso Quiñónez told CNN.

"Messaging is important. But the other part is how the coyotes tweak the messaging in order to present that the border is open, when it's not open," Quiñónez said, referring to smugglers.

In the last month, the number of migrants coming to the US-Mexico border has continued to rise.

US Customs and Border Protection encountered 171,700 migrants in March, including a record number of unaccompanied minors, far exceeding February's totals and continuing an upward trend dating back to last year, according to preliminary data obtained by CNN.

The influx has strained government resources that had already been under stress during the coronavirus pandemic, resulting in overcrowded conditions at border facilities and children languishing in stations not suited for their care.

Roxana Rivera, 28, told CNN last month that she and her 6-year-old daughter had left Honduras after back-to-back November hurricanes destroyed her home and everything in it.

Word back home, Rivera said, was that the US was now allowing people with children to freely cross the border -- which wasn't entirely true. She heard that on the news, she said. Relatives in the US relayed the same information. Other migrants have similar stories.

During a press briefing on Friday, White House press secretary Jen Psaki acknowledged the challenges of convincing migrants in Latin America not to journey to the US, and said the ads were only part of the administration's overall campaign.

"We continue to look for ways to project it more broadly and more effectively in the region. But that's a sliver of what our efforts are and we don't feel that simply telling people with more PSAs not to come that that is going to be the only way to reduce the number of people who are taking the journey," Psaki said.

'You will suffer a lot on the way'

This week, US Customs and Border Protection released a video of a smuggler dropping two young children from the top of a 14-foot-high border barrier. The smugglers fled the area, abandoning the 3-year-old and 5-year-old girls. Agents rendered aid and the sisters were eventually medically cleared, the agency said, adding that they remain in US custody.

"Just this month, a young girl died by drowning, a six-month-old was thrown into the river, and two young children were dropped from a wall and left in the desert alone. There can be no doubt that children are exceptionally vulnerable when placed in the hands of smugglers. There is grave risk they will be exploited and harmed," he added.

On Thursday, the US embassy in Guatemala posted a testimonial on Twitter, showing a woman, whose face is blurred, describing her journey with smugglers. "We walked for five days and five nights. They would only give you canned food and we had run out of water," she says, in Spanish. "You will suffer a lot on the way." The video is intended to warn migrants not to put their lives at risk.

Even so, migrants continue to rely on smugglers. An immigration attorney shared a Facebook page with CNN where migrants corresponded in the comment section about linking up with a smuggler.

"Generally, [messages are] not being heard and the reason for that is because the push factors for that are so strong that people are willing to take the risk even if it's a dangerous journey. They tune in more to their neighbors next door, their family, and smugglers," said Wendy Young, president of Kids in Need of Defense, which works with unaccompanied migrant children.

The challenge of shifting the message

Concerns over messaging date back to the transition.

During that time, officials recognized that migrants' expectations of the Biden administration were subject to being shaped by smugglers, according to a source familiar with the discussions. As early as December, incoming Biden administration officials did an interview with Spanish-language media cautioning people from coming.

But warnings from administration officials, no matter how senior, often fall short amid other messages spread within communities.

"Different administrations have used ads, social media ads. But are those ads really penetrating?" said Democratic Rep. Henry Cuellar of Texas. "The messages that are winning the day in the minds and hearts of immigrants, migrants, is ... word on the street and smuggler messaging."

"I think those ads can't hurt. I think it's important that people understand the realities of the journey. That may make some folks think twice. In that respect, there's probably no harm that comes from them, but I don't think I'd put a whole lot of stock really keeping a whole lot of people from staying home," said Democratic Rep. Veronica Escobar of Texas.

Worsening conditions in the region, pent-up demands and the perception of the Biden administration being more lenient have factored into the increasing numbers of migrants. Trump-era policies barring people from coming to the US also contributed to more people waiting in Mexico to come to the United States.

"If I'm hearing anything it's not about accurate information they have heard. It's about the disinformation they've come across," Lindy Morrison, executive director of Seguimos Adelante, a non-profit that supports asylum seekers, told CNN. "To them it's not disinformation until they get here."

In a nod to the gravity of the situation both on the border and in the region, President Joe Biden recently tapped Vice President Kamala Harris to lead efforts in Central America and address root causes of migration, a role mimicking what Biden did during influxes in 2014 and 2015.

That -- experts, lawmakers and officials argue -- is what will result in the most change.

This week, Harris spoke with President Alejandro Giammattei of Guatemala and discussed increasing humanitarian assistance to Guatemala, Honduras, and El Salvador, as well as exploring opportunities to create jobs and improve conditions for people in the region, according to a White House readout. Harris also thanked Giammattei for his efforts to secure Guatemala's southern border.