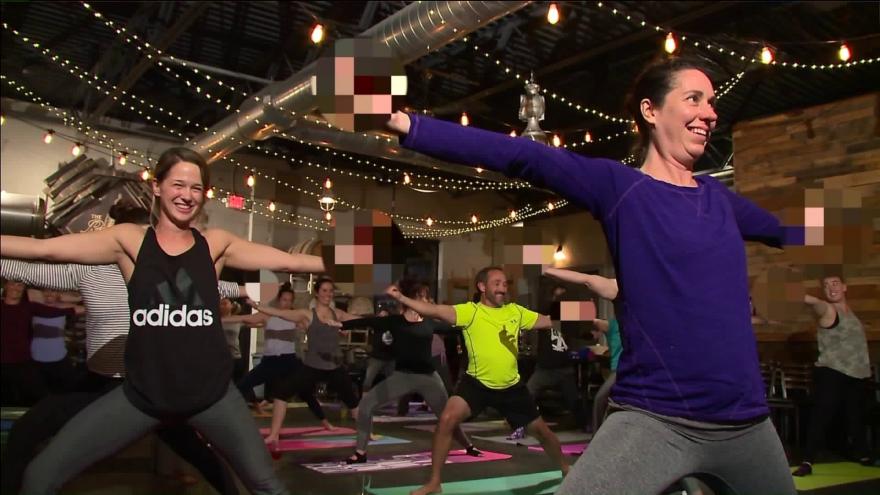 KANSAS CITY, MO (WDAF ) -- Yoga is about finding your center. There's a new trend to track down tranquility in the metro, but it’s a more alternative twist to the usually peaceful exercise.

Amanda Kauffman strolled into the back room at Cinder Block Brewery Monday night with a beer in one hand and a yoga mat in the other. She was there to teach the first ever rage yoga class in Kansas City.

“It’s a little bit different than your traditional yoga," she said. "You have dim lights, you have soft music. This is the complete opposite. It’s yoga with an attitude basically.”

She started practicing yoga seven years ago, but two years back, she came across a new technique she said is more her style.

“A lot of people stay away from yoga because they think, 'Oh well, you know, I’m not good enough for that, or what are people going to think about my poses,'" she said. "And in here, you can just be yourself.”

Monday night’s class participants each got a beer that they drank throughout their time on the mat, and traditional hand motions and positions were replaced with gestures and sounds you’d more likely see at a rock concert.

“I’ve never done rage yoga before," attendee Hillary Luppino said. "I had recently seen something online about it, and then I saw that it was available here, so I just jumped on the opportunity.”

She appreciated the alcohol twist, but also “the idea of also kind of incorporating the stress release of like yelling or screaming or flipping somebody off, you know what I mean?”

Kauffman described the scene before the 7 p.m. class began.

“We’ll be listening to loud explicit music, we will be cussing, using profanity, yelling, screaming, just letting all the negative energy out tonight. That’s the goal," she said.

The instructor said mental health is as critical as physical maintenance, and the combination of these two things appealed to her.

“In my house, I practice yoga to rock music, to metal music, to loud music," Kauffman said. "That’s just what I enjoy. So when I saw the teacher training program for rage yoga, it spoke to me. It’s the perfect combination of anyone who’s into yoga and into an alternative lifestyle as well.”

The rage yoga practice began in Canada, and there have been two instructor training courses so far. The next class here in the metro is scheduled for 7 p.m. Nov. 1 at Anytime Fitness in Excelsior Springs.