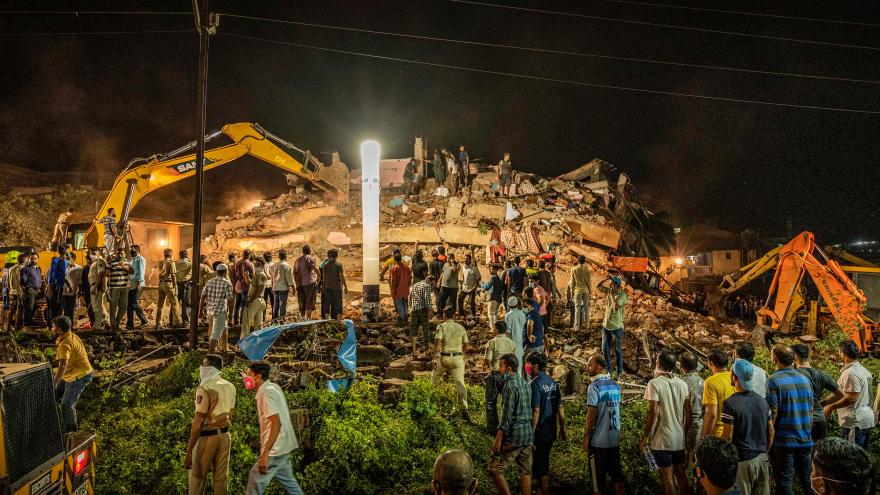 (CNN) -- Up to 60 people are believed to be trapped and some 18 injured following a building collapse in India's western Maharashtra state.

The figures are based on initial reports, according to Anupam Srivastava, head of the state unit for the National Disaster Response Force (NDRF).

Three teams from the NDRF are en route from the city of Pune to Mahad city in Raigaid district where the five-story building collapsed, Srivastava told CNN.

The teams are expected to reach the site in the early hours of Tuesday morning local time (5 pm ET), when they will have "a better idea of the situation," he added.

India's home affairs minister, Amit Shah, tweeted: "The collapse of a building in Raigad, Maharashtra is very tragic. Have spoken to DG @NDRFHQ to provide all possible assistance, teams are on the way and will be assisting with the rescue operations as soon as possible. Praying for everyone's safety."

For centuries, agriculture in South Asia has depended on the annual monsoon, which stretches from about June until September. But intense rains and floods also cause devastation and billions of dollars in damage and economic loss across much of the region every year.

The southwestern state of Kerala has been battered by rain and flooding this season. At least 43 people, including three children, died earlier this month after torrential rains triggered a landslide.

Monsoon rains have triggered deadly flooding in the eastern Indian states of Assam and Bihar since May, affecting more than 2.4 million people, swamping large parts of a national park, and killing more than 100 wild animals, including a dozen rhinos.

Elsewhere in the region, Nepal has endured massive landslides and severe flooding, while nearly one third of Bangladesh -- and a fifth of its population of 161 million people -- have been affected by floods.