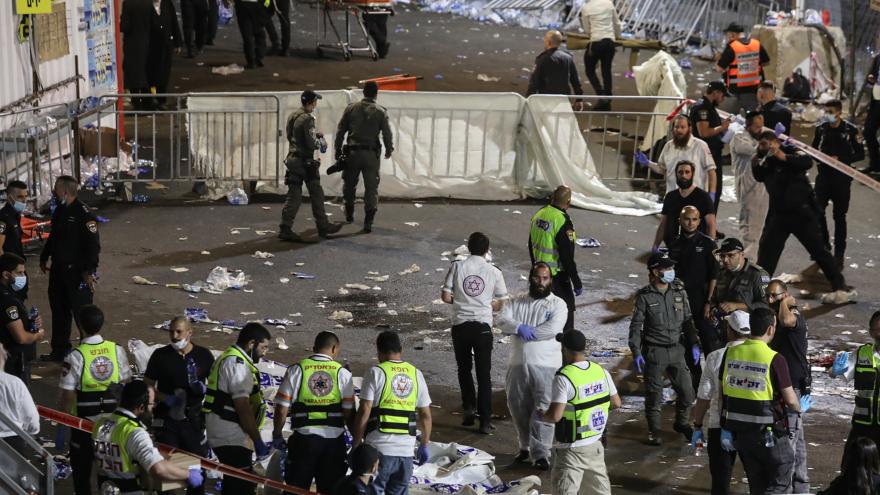 (CNN) -- At least 38 people have been killed and about 50 injured in a crash at a mass religious gathering on Mount Meron in northern Israel, emergency responders say.

Attendees were celebrating the religious Lag B'Omer holiday, the largest annual public event in Israel. It commemorates the death of Rabbi Shimon Bar Yochai, a second-century Mishnaic sage whose book "The Zohar" is the foundation of Jewish mysticism.

"This is one of the worst tragedies that I have ever experienced. I have not seen anything like this since I entered into the field of emergency medicine back in 2000," said Lazar Hyman, vice president of volunteer-based emergency organization United Hatzalah, who was at the scene.

Each year, hundreds of thousands of Jews -- many of them ultra-Orthodox -- flock to Bar Yochai's tomb site on Mount Meron, which lies in the Upper Galilee region of northern Israel, about 40 kilometers (25 miles) northeast of the city of Haifa.

The gathering was made possible this year by Israel's recent decline in daily Covid cases. Israel has fully vaccinated more than 58% of its population, making it one of the most vaccinated populations in the world.

The country's health ministry had urged people not to attend the festival, warning the pandemic is still not over. Yet there was significant pressure on authorities to allow it to go ahead -- especially as it was canceled last year.

Zaki Heller, spokesman for the ZAKA emergency service, rebutted initial reports that staging had collapsed at the site, saying the tragedy was the result of overcrowding.

The injured were transported to Ziv Hospital in Safed, Rambam Hospital in Haifa, and the Galilee Medical Center in Nahariya, according to United Hatzalah CEO Eli Pollack. Six helicopters were used to transfer the wounded.