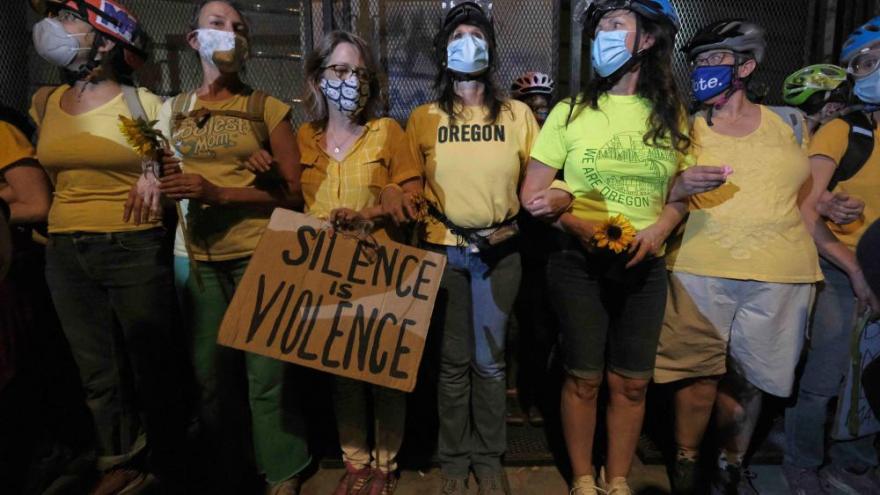 Women with interlocking arms stand with their backs against a fence blocking access to the entrance of the federal courthouse in Portland.

(CNN) -- As a mom in Portland, Oregon, was watching the unrest unfolding in her city, she felt compelled to get involved and protect protesters.

For more than 50 days, protests over racial inequality and police misconduct have carried on in Portland. While many have been peaceful, those demonstrations have also been marked by violence, vandalism, arson, arrests and allegations of police brutality.

Friday night, Bev Barnum said she was watching videos on social media from the protest showing people being detained by federal agents.

The videos showed masked, camouflaged federal authorities without identification badges in unmarked vehicles arresting protesters in Portland. These incidents have sparked the state's US attorney to call for an investigation into the matter.

Barnum said she told her husband she wanted to help and he suggested a fundraiser.

"But I thought I needed to do more so I asked the Portland working moms group to protest with me -- to shield the protesters from harm with our 'mombods,'" she said.

Barnum, founder of Wall of Moms, and about 70 other mothers converged onto the protest in downtown Portland, where protesters were gathered outside the federal courthouse. The women stood in the front of the protest line and locked arms to form a human shield. At times they were chanting "Moms are here! Feds stay clear!"

As protests have ramped up over the past few weeks, the Trump administration has sent in federal agents from the Department of Homeland Security to respond to the city. This has caused controversy with elected officials as Oregon Gov. Kate Brown and Portland Mayor Ted Wheeler have criticized the federal response.

Barnum, who is Mexican American, teamed up with Don't Shoot Portland, a Black-led advocacy group that has been fighting for social change in Portland since 2014. They are currently demonstrating for justice in the July 10 shooting death of teenager Shai'India Harris.

"We are just amplifying their message," Rebecca, another mom that joined Barnum, told CNN. "Parents have always been out there protesting. Black mothers have been doing this forever trying to get justice for their children."

Rebecca, who didn't want her last name printed out of fear of retaliation, told CNN she has been joining in the peaceful marches for five weeks now. The mother of five joined forces with Barnum to help bring protection to protestors in downtown Portland.

"I became concerned for the young people getting teargassed and flash-banged by police," Rebecca said. "It's like a war zone down there."

The group of peaceful moms grew over each night as the word spread on their social media groups. By Sunday night, around 200 women joined the Wall of Moms movement, according to Barnum.

While they set out to keep the peace, Barnum said, they were at times caught in the crossfire and were teargassed by police. Saturday night, protesters started dismantling the fence around the courthouse, Barnum said.

"The Feds came out of the building, they walked slowly, assembled themselves and started shooting," she said. "I couldn't believe it was happening. Traumatic doesn't even begin to describe it."

This didn't deter the Wall of Moms from gathering again Sunday. At 200 strong, Barnum said, she felt stronger with their numbers and hoped for peace.

"We blocked the fence in hopes that the kids wouldn't take it down and the feds would stay in their building," she said.

The peaceful night took a turn for the worse when the fence was toppled and police used teargas to disperse the protesters. Barnum said their group on social media has more than 2,000 moms wanting to participate and they aren't stopping anytime soon.

"We'll stop when there is no protester that needs our protection," she said. "We get thanks every which way. But we're not doing it for the thanks. We're doing it to protect human rights."