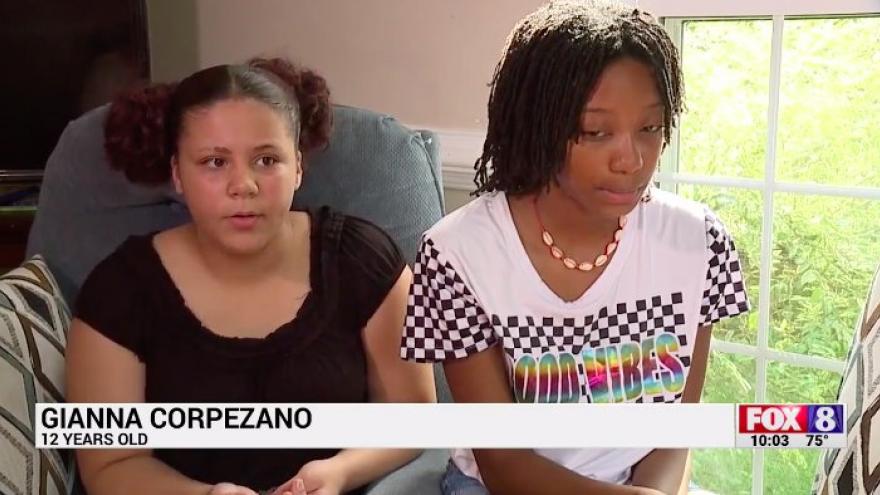 Graham, NC (WGHP) -- Two families, sharing a terrifying story tonight after they say their daughters were just trying to grab a snack from the local convenience store when they were assaulted by a 52 -year-old woman.

Investigators said a police officer was nearby and saw it unfold just in time to witness the vehicle almost hit the girls.

That suspect, Sandrea Warren, was arrested Saturday and made bond hours later. Warren is now facing a charge of assault with a deadly weapon with intent to kill.

The two moms of the 12-year-old girls told FOX8, they fear for their daughters’ safety and want to ensure justice is served.

“Almost hitting two 12-year-old minors with a truck because you thought they said, ‘What are you looking at?’ There’s something really wrong there. I hope she learns,” said Angela Corpenzano, the mother of one of the children who were allegedly assaulted.

“It’s close knit, seems like a nice community, but after what happened, I don’t feel the same as I used to,” Corpenzano said.

Friday afternoon, best friends Aisha Huru and Gianna Corpezano thought they were heading to the store to grab a quick snack. What they didn’t know was that this trip would be longer than most.

They walked out of the store laughing and talking amongst each other.

“We were laughing while looking at her, just happening to look at her. Out of nowhere, she rolls down her window and says, ‘What are you looking at black expletive?’” Gianna recalled.

Confused and hurt, the girls said they told the woman they weren’t speaking to her and started walking towards their homes while the woman drove in that same direction in front of them.

“She stops again and starts to back up and then we get scared and run away,” Huru explained.t

“She had jumped that curb right there near the telephone pole,” Huru said.

The girls told FOX8, Warren was headed right towards them, coming within inches of the girls.

Frozen in fear, they turned around only to find a police car behind them.

“I looked back and saw the cop car and thought, ‘Please god, make that cop have saw what just happened,’” Gianna said.

That officer had caught the end of the confrontation and was able to get this woman’s license plate before she reportedly sped off.

Warren was arrested the next afternoon and charged with assault with a deadly weapon with intent to kill.

“God forbid something had happened, what could you have said to justify taking their life and taking a piece of everything that’s a part of us away from us? I just, I don’t understand it,” Faith Cook, Aisha’s mother said.

Cook took to Facebook the day of the incident to talk about the painful experience. It has since been viewed close to 20,000 times. It’s one she wished her daughter never had to live through. But she is just glad she lived.

“I never want my kids to experience anything of that nature, where they would feel scared to even go take a walk for something they wanted as simple as a snack. It made me immediately think of Trayvon Martin. He went to the store for a snack,” Cook said.

They just want their families to feel safe again. That’s why they’re trying to get a restraining order against Warren.

But its been difficult to get the ball rolling because the woman did not have a pre-existing relationship with the family.

“The 50B I couldn’t file because there’s no relationship because there was no domestic relationship. The 50C, I couldn’t file because she would’ve had to have been seen as a stalker.,” Cook said. “Since no other communication had happened since the first incident, then we there was no way to consider her a stalker, well something has to be done,” she said.

Cook said it’s ridiculous that victims of first-time assaults have so much trouble trying to keep themselves safe.

“There has to be some kind of law changed that protects someone who has no relationship to somebody who has committed a crime against them, but they don’t have a way to keep themselves safe in the form a restraining order because nothing categorizes that person for falling into a label to stop them from hurting somebody,” she said.

Graham Police Department has not released the police report to the public yet because of the severity of that enhancement ‘intent to kill.’ They want to give the officer who witnessed the incident to give more details in that report.

Warren still faces those charges and had her first appearance in Alamance County Court on Monday. Her next appearance is set for Sept. 15.