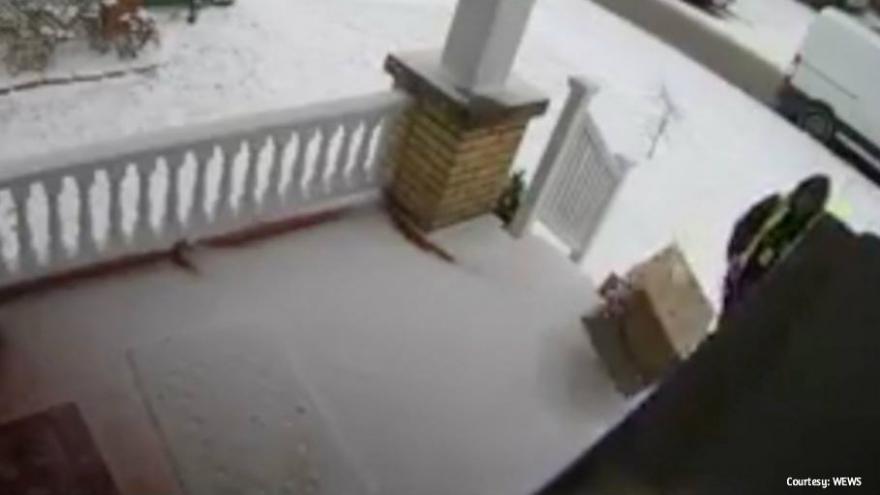 The driver, who reportedly works for a private company contracted out by Amazon to make deliveries, also tossed other packages in the neighborhood that day, neighbors said. In some of those cases, the items were broken.

"I just thought these guys are getting a bit lazy. They will take a couple of extra seconds to walk it up the stairs and place the package down," said one of the residents. "It made me a little angry to find out that others people were concerned about this issue."

Raul did not want his last name used, fearing his future deliveries might be tampered with. He received a notification on his phone from his home security system. He was shocked when he watched the video showing the delivery driver tossing the smaller package like a cornhole bag. The video shows the same driver shoving a larger package across the front porch.

"It was dropped in the snow as well. It could have been some type of electronics. The [snow] could seep through the cardboard box and damage whatever is inside. It's not just throwing it on the porch but where they're throwing it," Raul said. "You wouldn't do it with food. Why would you do it with something where you don't even know what's in the box?"

In various neighborhood forums, Lakewood residents have complained about the third-party delivery provider, Michigan-based Aaustin Express Inc. Amazon customers have complained the company's drivers are careless with their packages and often block narrow city roads while making deliveries. The company's local business address comes back to the Amazon Flex distribution center in Euclid.

A mail carrier and FedEx driver, who both wanted to remain anonymous because they were not authorities to speak to the media, said they were appalled by what they've seen from these third-party drivers. Many customer complaints are mistakenly lodged with USPS or FedEx instead of the third-party provider, they said.

"They're giving us professional drivers a bad name," one driver told News 5.

Raul said his security camera has captured the third-party delivery drivers toss his packages on at least four occasions. Luckily, the packages he received on Monday were not damaged.

"I've never seen any USPS guy throw a package on my porch like these guys do," Raul said.

Harry Hatfield, a spokesman for Amazon, said the company will address the issues with the delivery service provider.