Dunkin' is breaking away from foam coffee cups for paper 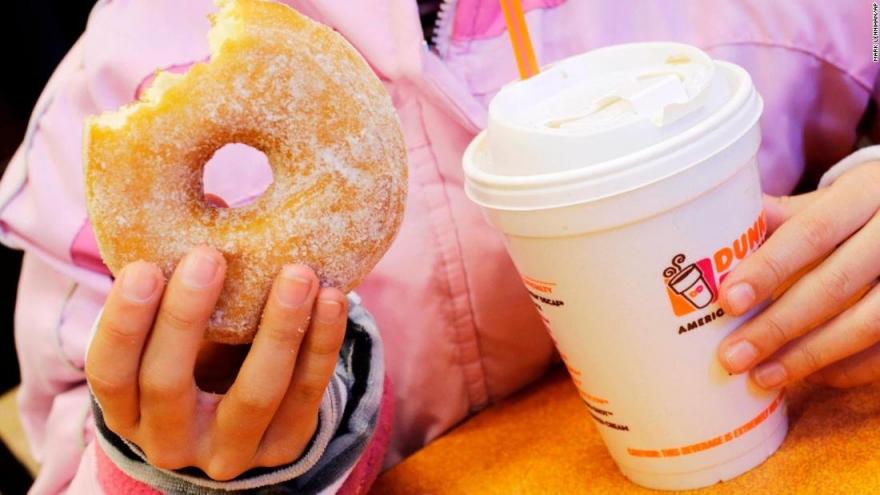 (CNN) -- It's not you. It's the environment. Dunkin' is ending its relationship with foam cups.

For decades, those who frequent Dunkin' were in a relationship with the chains' easily identifiable foam cups as much as they were with the hot brewed drinks.

The foam phaseout is underway in New England where it's expected to be completed across the region by December 1, CNN affiliate WFXT reports.

Because heat flowed through the polystyrene cups and made them hard to handle, for years folks often added an extra foam cup as insulation.

And in a nod to longtime customers who grew accustomed to double-cupping every time they grabbed coffee, Dunkin' is helping them warm up to the new cups.

Dunkin' has baristas wearing pins reading "the double cup is breaking up."

The company revealed billboards touting the chain's journey toward "Consciously Un-Cup-Ling" and on Twitter called it a #DoubleCupBreakup.

Dunkin', which dropped the "Donuts" part of its name last year, announced plans in February 2018 to eliminate polystyrene foam cups by 2020.

At the time, it had already begun introducing double-walled paper cups into its more than 9,000 US stores by using them in a concept store outside of Boston that opened in January 2018.

The full transition is expected to be completed by April 2020.

That's particularly important now, because this year both Maryland and Maine approved bans on Styrofoam.

The new cups are certified to the Sustainable Forestry Initiative Standard, the company says. They're lined with plastic on the inside and can keep coffee warm without burning people's hands. The need to double-cup is over.

Dunkin's double-walled cups are mostly, but not totally recyclable, and the company says it's up to local and state waste management services to figure out how to determine recyclability.

Most of Dunkin's 3,400 stores outside the US have already converted to paper cups, and the remaining international stores are set to hit the spring 2020 transition target, the company says.

The chain has made several other sustainability improvements over the past decade, transitioning to recycled paper napkins in 2009, and moving to using bagel bags with 100% recycled paper in 2014.