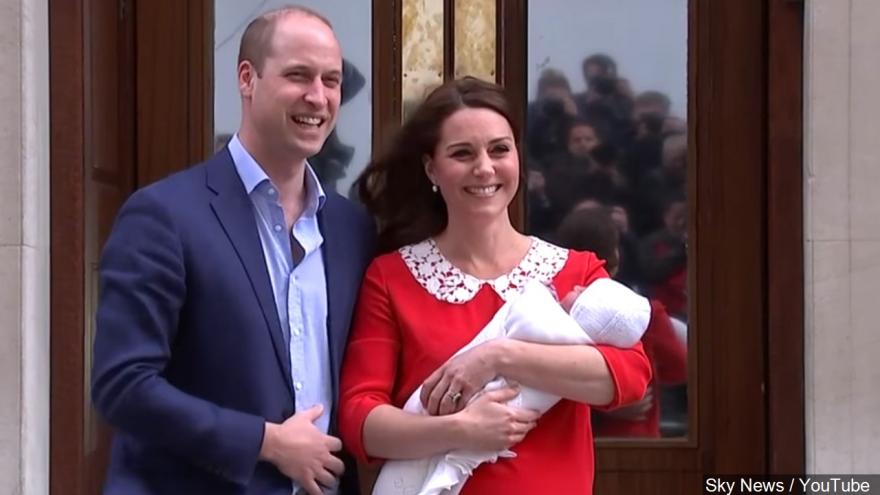 (CNN) -- Catherine, Duchess of Cambridge, the wife of Prince William, gave birth to the couple's third child on Monday, a son who becomes the fifth in line to the British throne.

The Duke of Cambridge was present for the birth, at 11 a.m. local time at St. Mary's Hospital in Paddington, west London, Kensington Palace said.

The newest arrival to the royal family weighs 8lbs 7oz (3.8 kilograms), and both mother and baby are "doing well," according to the Palace.

"The Queen, The Duke of Edinburgh, The Prince of Wales, The Duchess of Cornwall, Prince Harry and members of both families have been informed and are delighted with the news," Kensington Palace said in a statement on Twitter.

Catherine and William emerged onto the steps of the Lindo Wing to introduce the baby to the world's media shortly before 6 p.m. local time.

The duchess, who was wearing a striking, raspberry-red dress, cradled her baby as the couple waved to well-wishers. Wrapped in a white blanket and wearing a white hat, the baby appeared to be sleeping.

William, dressed in a navy suit and pale blue shirt, drove his family home, with Catherine sitting in the back with the baby.

Prince William had left the hospital for a short time Monday afternoon, before returning with his other children George, 4, and Charlotte, 2. As the three royals entered the hospital, Charlotte waved over her shoulder at the reporters gathered on the other side of the street.

In a statement, Kensington Palace said: "Their Royal Highnesses would like to thank all staff at the hospital for the care and treatment they have received," read the statement.

The statement continued: "They would also like to thank everyone for their warm wishes."

A golden easel bearing a framed notice announcing the birth was placed on display in front of Buckingham Palace on Monday afternoon. The bulletin will be on display for approximately 24 hours.

The practice of posting a bulletin on the occasion of a royal birth goes back to at least 1837, when Buckingham Palace became the British monarch's official residence.

The royal baby is fifth in line to the British throne, after grandfather Prince Charles, father Prince William and two siblings.

The newest addition to the royal family is a younger brother to Prince George, 4, and Princess Charlotte, 2, and the Queen Elizabeth II's sixth great-grandchild.

Prince George was born at the Lindo Wing in 2013, and Princess Charlotte in 2015. Their father William was also born at the same facility.

The duchess' pregnancy was announced in September. At the time, she was said to be suffering from hyperemesis gravidarum, which involves nausea and vomiting more severe than the typical morning sickness many women suffer during early pregnancy. The duchess was affected by the same condition during her two previous pregnancies.

As her symptoms eased she returned to public engagements, making appearances alongside William, Harry and his fiancee, Meghan Markle.

The birth comes justweeks before the wedding of Harry and Markle at St. George's Chapel in Windsor on May 19.

William and Kate will mark their own seventh wedding anniversary on April 29.

The news of a royal birth is traditionally announced on a gilded easel placed outside Buckingham Palace. Large crowds gathered outside in July 2013 to see the announcement of the arrival of William and Kate's first child.

The couple announced his name, George Alexander Louis, and that of their daughter, Charlotte Elizabeth Diana, a couple of days after each was born.

Among bookmakers' favored names for the couple's third child are Arthur, Albert and Frederick.

The new baby was not the only royal child to make history Monday.

The birth of the new prince was also a significant moment for Charlotte, the first princess who will not be overtaken in the line of succession by her younger brother.

Before the 2013 Succession to the Crown Act, the newborn prince would have jumped above his older sister in the line for the thrown.

But the Act means that a female's claim to the royal throne can no longer be diminished by a younger brother.