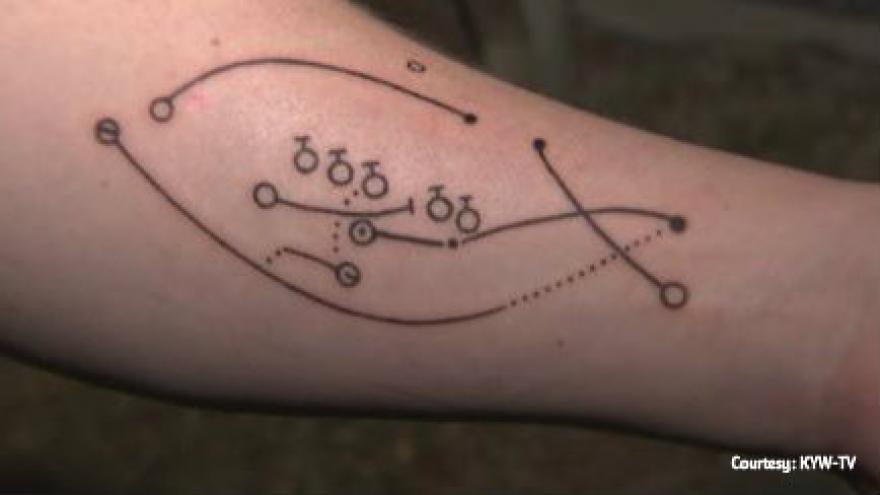 PHILADELPHIA (KYW-TV) -- After the first Super Bowl win in franchise history, some Eagles fans are celebrating by inking the occasion.

Some just get the Eagles logo, but for Dan Morgan, it was Doug Pederson’s trick play that will leave a lasting impression.

With under a minute left in the second quarter, it was fourth and goal for the Eagles who were leading 15-12. That’s when Pederson called a trick play.

The ball is snapped to Corey Clement, he flips the ball to Trey Burton, who then finds Nick Foles open in the end zone for a touchdown.

“I was screaming, I did not want them to go for it,” said Morgan. “I’m generally pretty ok with the aggressiveness, but I’m pretty sure that my Twitter timeline would reflect that I wanted them to kick it there… It was the greatest play that I have ever seen in my entire life.”

The play ultimately found its way onto Morgan’s arm.

“I had to get something Eagles tattooed on me. I didn’t want to get the same thing that I imagine everyone else was getting, which was like the trophy or just the logo. So I saw a lot of people making t-shirts of the ‘Philly Special’ play design and I thought that would be really awesome to get one on me– so I did,” he said.

Burton, who lives in Deptford, says the win meant a lot to him.

“My stepdad was a giant Eagles fan and made me an Eagles fan. He passed away about 11 years ago. Me and two of my best friends have watched every game together with him before [his death]. So last night to watch with them, to finally win it, it was pretty much the biggest thing on my bucket list for the rest of my life.”