Earthquake kills 14 on tourist island of Lombok in Indonesia 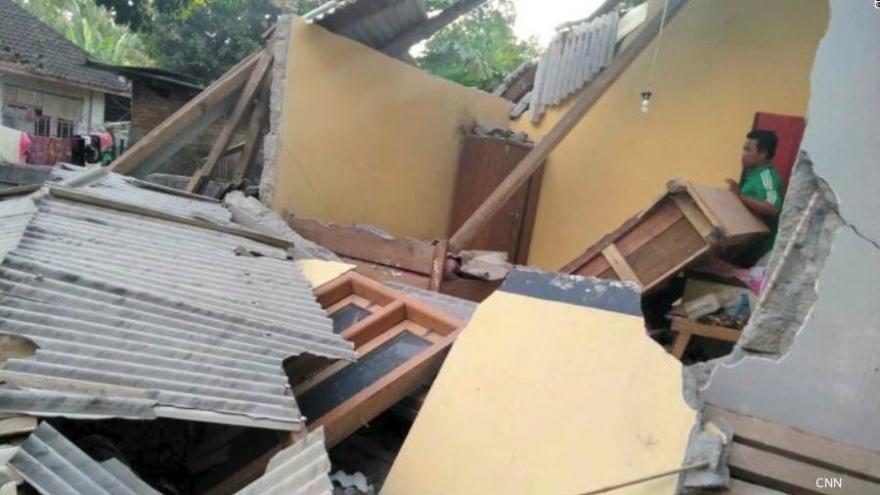 (CNN) -- A 6.4-magnitude earthquake hit the island of Lombok in Indonesia on Sunday, killing at least 14 people in the popular vacation destination and sending residents fleeing from collapsing buildings at dawn.

In addition to the fatalities, at least 162 people were injured, according to Indonesia's National Disaster Management Agency.

More than 1,000 homes were damaged by the earthquake, said Sutopo Purwo Nugroho, a spokesman for the agency.

The dead include a Malaysian citizen, Indonesia's National Disaster Search and Rescue agency said, with casualties in Lombok's northern and eastern districts.

The earthquake struck around 5:45 a.m. Sunday local time (6:45 p.m. Saturday ET) and had a shallow depth of 7.5 kilometers (4.6 miles), according to the United States Geological Survey (USGS).

The island is about 140 miles east of Bali, and the earthquake was not far from Mount Rinjani, a volcano.

The International Federation of the Red Cross and Red Crescent Societies is trying to determine how many people are missing. Volunteers joined police and rescue teams to assist the wounded and look for survivors.

The owner of a hotel in West Lombok told CNN that the area gets small earthquakes "every month or so." However, he said, Sunday's quake was the strongest he had experienced on the island.

"We were still sleeping when we felt the earthquake, so we rushed outside of our building. There was about 20 seconds of shaking, the water in the pool was making quite large waves," said Jean Paul Volchaert, who owns the Puncak Hotel.

"Luckily there was no damage to our building, our neighborhood was relatively untouched, but I know there have been casualties and a lot of damage in the north of the island," Volchaert said. "We felt aftershocks for two hours after the initial earthquake, so we're worried that there could be more damage caused."

The Indonesian Red Cross said on Twitter that Lombok's Sembalun district appeared to be the hardest-hit. The organization said its teams were helping with search and rescue.

The US Embassy in Jakarta tweeted that hiking at Mt Rinjani had been suspended due to landslides and that Bali airport was operating as normal.

Officials in Australia, India and Indonesia did not issue a tsunami advisory.

Model and TV personality Chrissy Teigen tweeted that she felt the quake in Bali.

"Oh my. Long earthquake here in Bali," she said in an initial post.

That was followed a couple of hours later with: "Oh don't mind us just more earthquakes over here." Teigen had been tweeting prior to that about her family vacation in Bali with her husband, singer John Legend, and their two children.

The Indonesian archipelago where Lombok and Bali are located is part of the Pacific Ring of Fire, an area of intense seismic and volcanic activity.

The 40,000-kilometer (25,000-mile) area stretches from the boundary of the Pacific Plate and the smaller plates such as the Philippine Sea plate to the Cocos and Nazca Plates that line the edge of the Pacific Ocean.