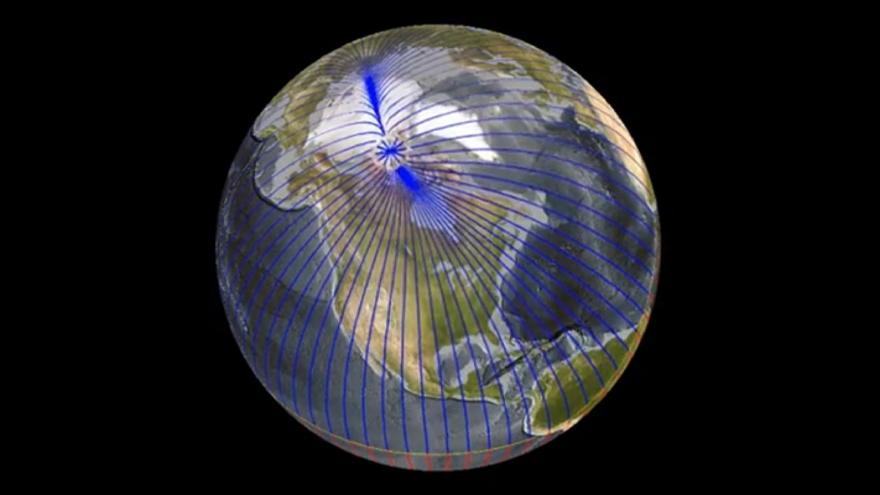 (CNN) -- Unlike its geographical poles, Earth's magnetic poles that serve as the foundation of our navigation are actively moving.

The north magnetic pole has been slowly moving across the Canadian Arctic toward Russia since 1831, but its swift pace toward Siberia in recent years at a rate of around 34 miles per year has forced scientists to update the World Magnetic Model -- used by civilian navigation systems, the North Atlantic Treaty Organization, and US and British militaries -- a year ahead of schedule.

The World Magnetic Model 2020 forecasts that the pole will continue on its path to Russia, but now the speed is slowly decreasing to about 24.8 miles per year. Since its discovery in 1831, the pole has traveled 1,400 miles.

The magnetic field reverses its polarity every several hundred thousand years, where the magnetic north pole resides at the geographic South Pole. The last reversal took place 770,000 years ago.

In a new study, researchers discovered that the last field reversal took 22,000 years to complete -- much longer than anticipated or expected, the researchers said.

Although some believe reversals could happen over the course of a human life, the findings don't support that theory.

Researchers were able to study the reversal by analyzing a global survey of ocean sediments, Antarctic ice cores and lava flows. The details within those samples revealed how Earth's magnetic field has weakened, shifted partially, stabilized and reversed over a million years.

"Reversals are generated in the deepest parts of the Earth's interior, but the effects manifest themselves all the way through the Earth and especially at the Earth's surface and in the atmosphere," said Brad Singer, study author and University of Wisconsin-Madison geologist. "Unless you have a complete, accurate and high-resolution record of what a field reversal really is like at the surface of the Earth, it's difficult to even discuss what the mechanics of generating a reversal are."

Our planet's magnetic field is created by an interaction between the liquid iron outer core spinning around the solid inner core. When a reversal happens, the normally strong magnetic field weakens.

"Lava flows are ideal recorders of the magnetic field. They have a lot of iron-bearing minerals, and when they cool, they lock in the direction of the field," Singer said. "But it's a spotty record. No volcanoes are erupting continuously. So we're relying on careful field work to identify the right records."

Radioisotope dating of lava flows and continuous magnetic readings from the ocean floor and Antarctic ice cores helped recreate a picture of the last reversal for the researchers.

Argon can be measured from the lava flows as the radioactive decay of potassium occurs in the rocks, while beryllium can be measured in the ice cores. A weakened magnetic field allows more cosmic radiation from space to strike our atmosphere, which creates more beryllium.

The actual reversal took less than 4,000 years -- a drop in the bucket when compared to Earth's timeline so far. But leading up to that reversal were 18,000 years of instability, including two temporary and partial reversals. This is twice as long as expected.

The magnetic field decreases in strength about 5% each century and signs of weakening in the field point to an upcoming reversal -- but it's hard to know when that reversal will happen.

If a reversal happened during our lifetime, it could impact navigation, satellites and communications. However, the researchers believe that we would have generations to adapt for long periods of instability in the magnetic field.

"I've been working on this problem for 25 years," Singer said. "And now we have a richer record and better-dated record of this last reversal than ever before."