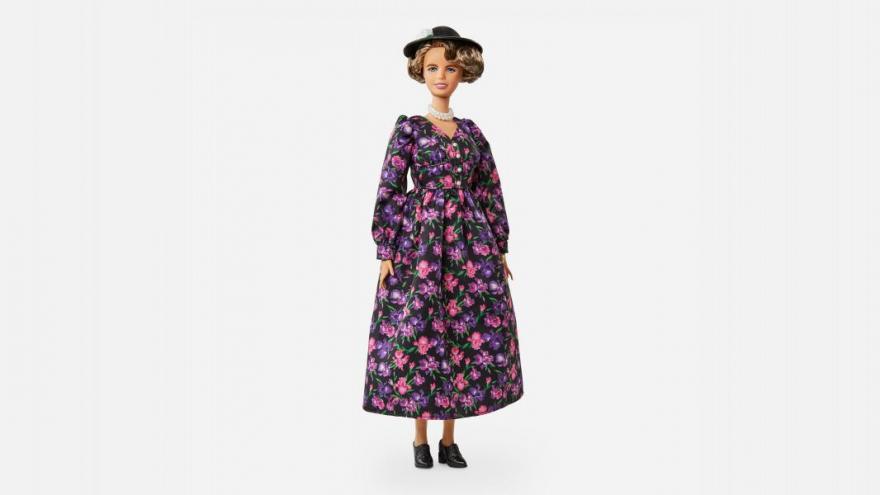 Former first lady Eleanor Roosevelt has been made into a Barbie doll as part of the company's "Inspiring Women" series.

(CNN) -- One of the most influential women of the 20th century is being introduced as a role model to a new generation of girls.

Former first lady Eleanor Roosevelt has been made into a Barbie doll as part of the company's "Inspiring Women" series, which pays tribute to women throughout history. She's the only first lady to have a Barbie doll named after her.

"We are delighted to welcome former First Lady Eleanor Roosevelt to the Barbie Inspiring Women series and to shine a light on how her perseverance as a champion of policies around civil and economic rights made an impact on the world," said Lisa McKnight, senior vice president and global head of Barbie and dolls at Mattel.

Mattel's newest release comes as the brand celebrates International Women's Day, which is March 8. It is a day that celebrates the social, economic, cultural and political achievements of women.

Roosevelt served from 1933 to 1945 during the presidency of husband President Franklin D. Roosevelt. She connected with the public through her daily news column and went beyond the traditional first lady role. She also served as a United Nations diplomat and humanitarian after her days in the White House.

The Eleanor Roosevelt doll is dressed in a floral print dress, a pearl necklace and a black hat.

Barbie has come a long way. The first Barbie ever had blond hair, blue eyes and was wearing a bathing suit. Barbie has been everything from a secretary to an astronaut and now a first lady.

"Eleanor Roosevelt was one of the most influential First Ladies in history. She was a fierce advocate for peace, racial justice, and civil rights; a keen and savvy political adviser; and a tireless champion of women's equality and economic opportunity. She truly devoted her life to making the world a better, more just place," said Jennifer Herrera, vice president of external affairs for the National Women's History Museum.

Roosevelt was a champion of policies around civil and economic rights. She was a passionate advocate who was persistent, even in the face of resistance.

Roosevelt redefined the role of women in politics and public life, and she earned the title "First Lady of the World" for her dedication to humanitarian efforts.

Barbie launched its first-ever digital series, Barbie You Can Be Anything, featuring female role models.

Rosa Parks, the mother of the modern civil rights movement, and Sally Ride, the first American woman to fly in space, have also been honored with their own Barbie dolls.