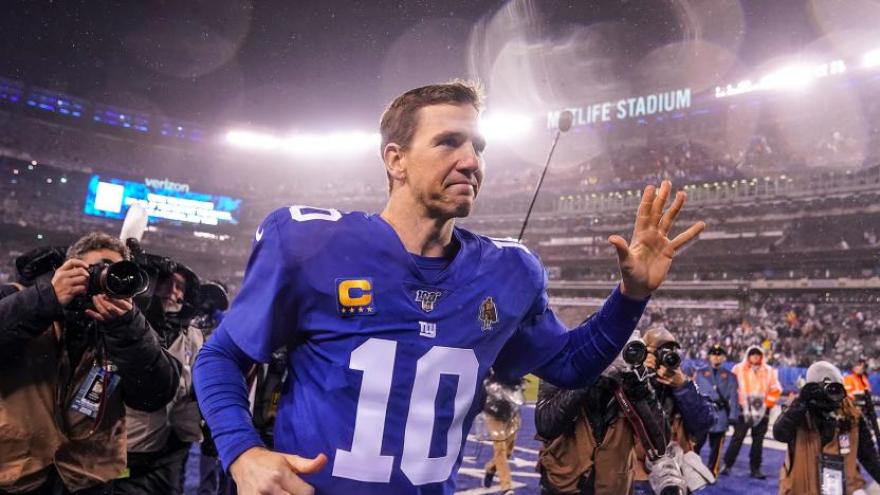 Giants quarterback Eli Manning announced his retirement from the NFL in an emotional press conference.

The longtime New York Giants quarterback was selected with the No. 1 overall pick in the 2004 NFL draft by the San Diego Chargers but had his rights immediately traded to the Giants.

Manning finishes his career with 57,023 passing yards and 366 touchdowns, both of which rank him seventh all-time in NFL history.

"From the very first moment, I did it my way," Manning said during his retirement press conference. "I couldn't be someone other than who I am. Undoubtedly, I would have made the fans, the media, even the front office more comfortable if I was a more 'rah-rah guy,' but that's not me. Ultimately, I choose to believe that my teammates and the fans learned to appreciate that. They knew what they got was pure, unadulterated Eli."

"This is certainly a day of very mixed emotions for us," president, CEO and co-owner of the Giants John Mara said. "It's sad in one sense, because we're seeing the end of an incredible playing career and saying goodbye to someone who has been everything you can ask a player to be both on and off the field.

"Yet we are also very happy because we get to be here to celebrate that incredible career."

Manning was benched earlier this season to allow first-round draft pick Daniel Jones to take the reins. But Manning was able to start two final games after Jones was injured late in the season. Manning's last game came in a 36-20 win over the Miami Dolphins on December 15.

"This sport has very few real farewells," Manning said. "As the clock ran down in our win against the Dolphins this season, I ran to my favorite place in the stadium: the tunnel. I waved to our loyal fans, and then (wife) Abby and my kids ran out to meet me. That was my farewell. And a moment I'll cherish forever."