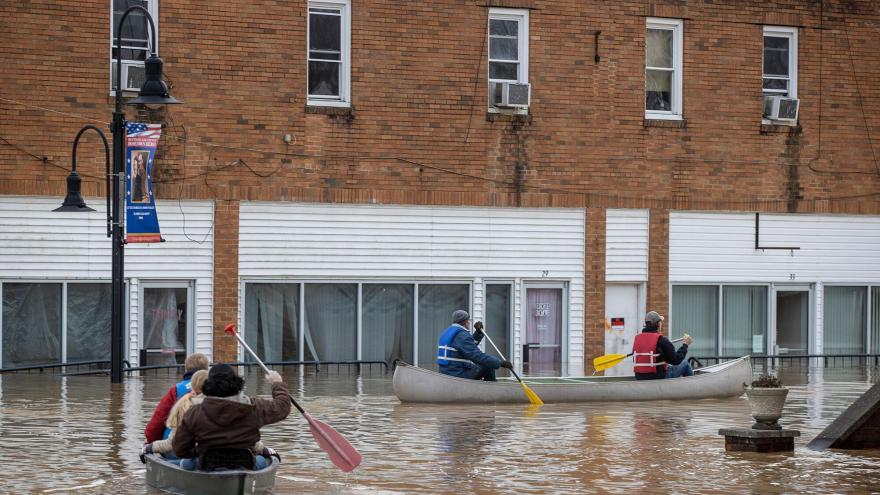 A batch of Covid-19 vaccines had to be rescued by boat after heavy rains threatened the power supply at a Kentucky health facility, according to Gov. Andy Beshear.

(CNN) -- A batch of Covid-19 vaccines had to be rescued by boat after heavy rains threatened the power supply at a Kentucky health facility, according to Gov. Andy Beshear.

The doses were rescued from the Lee County Health Department in Beattyville and moved to Wolfe County, Beshear said during a press conference Monday.

Not a single dose was lost, he said.

Heavy rains on top of snow melt which saturated the soil have caused major flooding in Kentucky, which set over a dozen record for rainfall totals on Sunday, according to CNN Meteorologist Michael Guy.

Much of the state saw two to four inches within 72 hours as some pockets received four to six inches and others saw up to ten, Guy said.

"We expect this to be one of the largest flash-flooding events that we've had," Kentucky Emergency Management Director Michael Dossett said during the press conference Monday.

The extensive rains resulted in the governor declaring a state of emergency along with 36 local disaster declarations across 29 counties and seven cities.

In response, the Kentucky National Guard has been activated, with approximately 70 guard service members providing support, along with at least four helicopters, he said.

One killed in Georgia

The same weather system that caused the extensive flooding created heavy winds in Georgia and was responsible for at least one death, according to officials.

Harvey Hillman, 65, died after being struck by a tree limb that fell on him and his truck Monday morning in Riverdale, according to a statement posted on the Clayton County Police Department's Facebook page.

Hillman was heading to his truck to go to work when a severe storm hit the area and the large limb from the tree fell on his truck. His family heard the crash and found him on the ground, the statement said.

The family attempted life-saving measures after carrying him "out of the storm" but were unsuccessful and he died from his injuries, according to police.