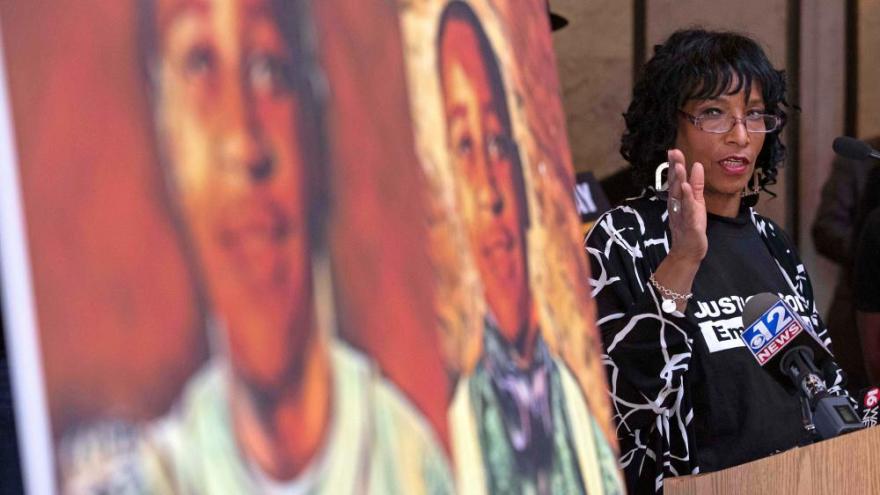 Deborah Watts, a cousin of Emmett Till speaks as she point to a painting of Till during a news at the Mississippi Capitol, on Friday, March 11, 2022, in Jackson.

(CNN) -- Family members of Emmett Till, the 14-year-old Black teen whose murder in the Jim Crow South spurred the civil rights movement in America, say they have unearthed an unserved arrest warrant for the White woman who accused him of making advances toward her, sparking the events that led to his death nearly 70 years ago.

"I cried. We cried. We hugged," Deborah Watts, Emmett's cousin, told CNN of the moment she said members of the Emmett Till Legacy Foundation found the warrant in a dusty, dank box in a county courthouse in Greenwood, Mississippi. "Unbelievable. We held each other. Justice has to be served."

The warrant was discovered last week by a five-member search group led by members of Till's family, including Deborah Watts and her daughter Terri. An image of the warrant, provided to CNN by the foundation, charged J.W. Milam, Roy Bryant and Bryant's then-wife -- identified in the document as Mrs. Roy Bryant -- with kidnapping and orders their arrests. The warrant is dated August 29, 1955, and signed by the Leflore County Clerk.

The two men were acquitted of Emmett's murder soon after by an all-White jury, though they later admitted to the killing in an interview with Look magazine. Milam died in 1980 and Bryant died in 1994, but his widow -- now Carolyn Bryant Donham -- is still alive, and Emmett's family hopes the warrant will lead to her arrest and, ultimately, justice.

"Justice has to be served," Watts told CNN, adding, "Emmett led us to it. I know that in my heart."

The image of the warrant shows the current Leflore County clerk certified the document as authentic on June 21. Absent action from law enforcement in light of the finding, the family has considered taking initiative to help bring justice in Emmett's brutal killing.

"We thought of things like citizen's arrest," Watts said. "If the authorities aren't going to do this, what can we do?" Watts told CNN.

The family believes the warrant serves as new evidence that went decades without being searched for, Watts added, and when it was found, the family was overcome with emotions.

"It was overwhelming. ... We were also in a state of shock," Watts said.

Terri Watts echoed those sentiments: "I had to look at the warrant several times just to make sure that it was real," she said.

"I definitely want to see it through. But it has been a tremendous amount of trauma. I still feel like the weight is on our shoulders. We found the new evidence, and so we just want justice served," Terri Watts said.

The discovery of the warrant was first reported by the New York Amsterdam News, one of the nation's oldest African American publications.

According to The New York Times, an affidavit attached to the warrant said the three "did willfully, unlawfully and feloniously and without lawful authority, forcibly seize and confine and kidnap" Emmett, though it misspelled his last name. A note on the back of the warrant says Donham was not arrested because she could not be located at the time, the Times reported, citing filmmaker Keith A. Beauchamp, who was part of the team that discovered the warrant.

Neither Donham nor the Leflore County Clerk's Office have responded to CNN's requests for comment.

Professor claimed Donham recanted testimony that Emmett Till grabbed her

While Emmett's killing remains a touchstone moment in the United States' long struggle with racial injustice and inequality, to this day, no one has been held criminally responsible.

The 14-year-old boy from Chicago was visiting family in Mississippi when he had his fateful encounter with then-20-year-old Carolyn Bryant. Accounts from that day differ, but witnesses alleged Emmett whistled at the woman at the market she owned with her husband in Money, Mississippi.

Roy Bryant and Milam later took Emmett from his bed, ordered him into the back of a pickup truck and beat him before shooting him in the head and tossing his body into the Tallahatchie River. But they were both acquitted of murder following a trial in which Carolyn Bryant testified that Emmett grabbed and verbally threatened her. The jury deliberated for barely an hour.

In 2007, a Mississippi grand jury declined to indict Donham on charges. And according to archived FBI documents, Milam and Roy Bryant were arrested on a kidnapping charge in 1955, but a grand jury failed to indict them. "The original court, District Attorney, and investigative records related to the 1955 investigation have been apparently lost," the FBI said in a 2006 report.

Donham testified in 1955 that Emmett grabbed her hand, her waist, and propositioned her, saying he had been with "White women before." But years later, when professor Timothy Tyson raised that trial testimony in a 2008 interview with Donham, he claimed she told him, "That part's not true."

The prospect that the woman at the center of Emmett's case had recanted her testimony -- which the US Justice Department said in a memo would contradict statements she made during the state trial in 1955 and later to the FBI -- sparked calls for authorities to investigate the case anew.

The DOJ, which had already re-examined and closed the case in 2007, reopened the probe into Emmett's killing in 2018. But the case was closed in December after DOJ's Civil Rights Division concluded it could not prove Donham had lied. When questioned directly, Donham adamantly denied to investigators that she had recanted her testimony.

Emmett's death captured attention far beyond Mississippi, after a photo of his mutilated body was published in Jet Magazine and spread around the world. His mother, Mamie Till-Mobley, had demanded he have an open-casket funeral so the entire world could see her son's injuries and the results of racial terrorism -- a decision that helped fuel the civil rights movement.

Emmett's legacy, however, lives on: In March, President Joe Biden signed into law the landmark Emmett Till Antilynching Act, which made lynching a federal hate crime.