'End of the Rainbow': Shanghai Pride shuts down amid shrinking space for China's LGBTQ community 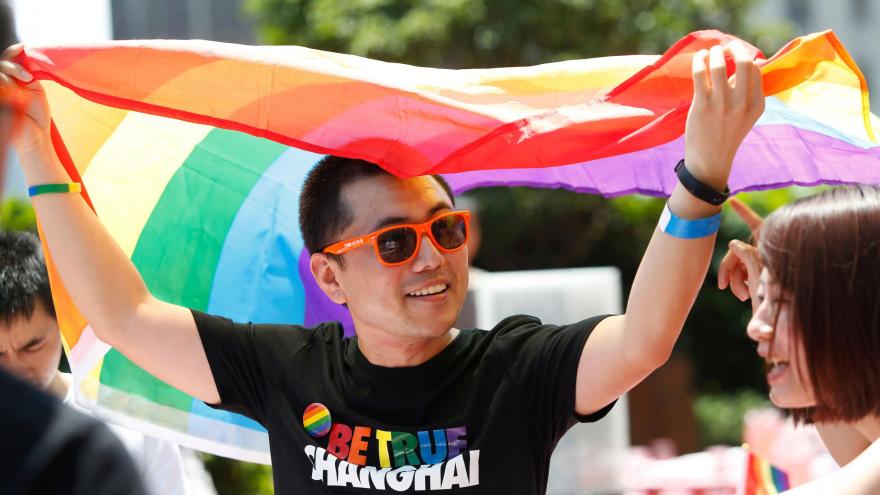 (CNN) -- Shanghai Pride, China's longest-running and only major annual celebration of sexual minorities, abruptly announced its effective shutdown on Thursday, in the latest sign of the authorities' increasing clampdown on civil society and LGBTQ rights in the country.

In an open letter posted online, titled "the End of the Rainbow," the organizers recalled Shanghai Pride's humble origins as a one-off small community event in 2009, and its steady growth into a monthlong celebration -- featuring not just dance parties but also athletic contests, art exhibitions, film screenings, job fairs and themed talks -- attended by thousands of LGBTQ people and their allies over the years, with other special events scheduled year-round.

Then, with regret, they said they were "canceling all upcoming activities and taking a break from scheduling any future events" without giving a reason.

A person not associated with Shanghai Pride, but with knowledge to the situation, told CNN on Friday that the all-volunteer team had been facing mounting pressure from local authorities, to the point of where it was disrupting their day jobs and normal lives.

The organizers alluded to this in a separate Thursday note to supporters and partners seen by CNN.

"The decision was difficult to make but we have to protect the safety of all involved," they wrote. "It's been a great 12-year ride, and we are honored and proud to have traveled this journey of raising awareness and promoting diversity for the LGBTQ community."

In response to a CNN inquiry, an official from the Shanghai government said that Shanghai Pride was a non-governmental organization and referred all questions about its latest decision to the organizers. She declined to comment further.

Gay rights advocates say they are stunned and saddened by the news, which came not long after this year's Shanghai Pride, successfully held offline in mid-June despite challenges posed by the Covid-19 pandemic. Many activists contacted by CNN on Friday declined to be interviewed or speak on the record, having seen this negative development in China's largest and most cosmopolitan city.

"The public gets to see the visible and impactful aspects of what we do, but they can't imagine the difficulties we face behind the scenes -- I think Shanghai Pride is no exception," said the head of one national LGBTQ rights advocacy group, who requested anonymity for fear of government reprisal.

"With things becoming harder and riskier, laying low may let you survive for now," he added. "But the purpose of our job is to raise visibility and educate the public -- that's the dilemma."

Homosexuality is not illegal in China and, in 2001, the authorities removed it from an official list of mental disorders. But experts and activists say LGBTQ people still face persistent discrimination and prejudices from the Chinese government and public. And despite last year's legalization of same-sex marriage in the self-governing island of Taiwan, which Beijing considers a breakaway province, there is little prospect of the mainland following suit in the foreseeable future.

Chinese President Xi Jinping has increasingly stressed the ruling Communist Party's absolute control over every aspect of society, squeezing out the already-limited presence of non-governmental organizations. Some also suspect a more direct link between the crackdown on LGBTQ rights and top officials' worldviews, which for many were shaped during the Cultural Revolution in the 1960s and '70s, when authorities attempted to purge any "non-socialist" elements -- including homosexuality -- from Chinese society.

Since 2016, Chinese censors have banned portrayals of what they see as "abnormal sexual behaviors," including gay relationships, in TV and online shows. Most media and businesses in China have long stayed away from the subject to avoid running afoul of government restrictions -- but Shanghai Pride was able to attract some commercial sponsors, both local and foreign, during its run.

Unlike Pride celebrations elsewhere in the world, Shanghai Pride never held major street parades. Most of its events remained indoors -- in bars, restaurants and foreign consulates. Despite the low-key approach, one of the organizers has described to CNN the constant uncertainty in planning events, including last-minute venue changes for art exhibitions due to official demands.

"It's really part and parcel of organizing Pride every year," said Charlene Liu in 2019. "We have had similar issues (in the past), and we always have to have a plan B or plan C."

Even following a smooth opening at a different gallery, Liu said officials ordered that some of the art be taken down with little explanation.

Among the artists showing work at the Pride exhibition last year was Yang Yiliang, who incorporates Chinese folk art and other traditional influences into his LGBTQ-themed paintings. The 29-year-old artist from central China has said finding domestic venues willing to display gay-themed artwork remains a daunting task.

"I feel a tremendous sense of loss," he told CNN on Friday, when asked about the end of Shanghai Pride, which again featured his work in this year's art exhibition. "They've always given me so much encouragement as well as exhibition space -- they've been motivating my creations."

"I hope this loss is only temporary," he added. "I'll keep painting."

His determination is echoed by others, too.

"Doing what I can stops me from falling into a sense of helplessness," said the gay rights activist who requested anonymity. "Doing nothing will only make me feel more hopeless."

"Don't ever attach yourself to a person, a place, a company, an organization or a project," Liu, the Shanghai Pride organizer, posted a favorite passage on her social media account. "Attach yourself to a mission, a calling, a purpose only -- that's how your keep your power and your peace."