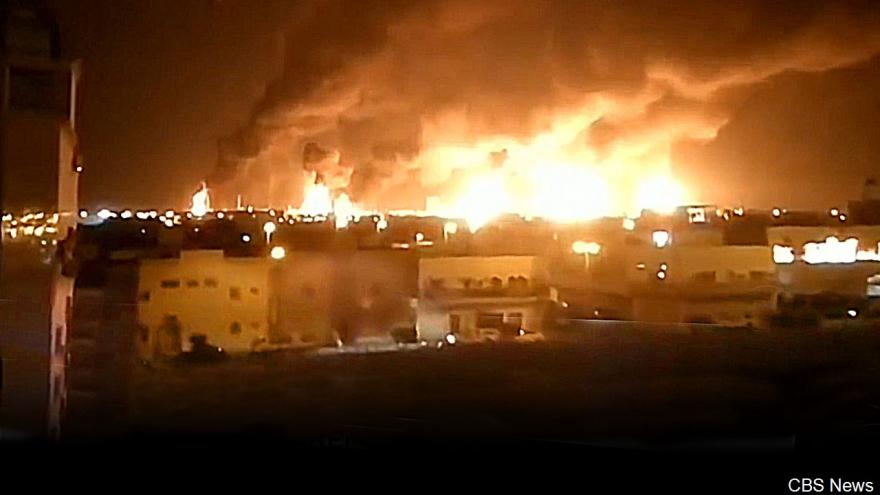 Fires from an attack on the Abqaiq oil processing facility in Saudi Arabia, Photo Date: 9/14/2019

DUBAI, United Arab Emirates (AP) — Global energy prices spiked on Monday after a weekend attack on key oil facilities in Saudi Arabia caused the worst disruption to world supplies on record, an assault for which President Donald Trump warned that the U.S. was "locked and loaded" to respond.

U.S. officials offered satellite images of the damage at the heart of the kingdom's crucial Abqaiq oil processing plant and a key oil field, alleging the pattern of destruction suggested the attack on Saturday came from either Iraq or Iran — rather than Yemen, as claimed by Iranian-backed Houthi rebels there.

Iran for its part called the U.S. allegations "maximum lies."

The Houthis on Monday warned of more attacks on Saudi oil facilities and urged foreign companies doing business in the kingdom to stay away from its energy sites. Yahia Sarie, a rebel spokesman, said facilities such as the Abqaiq oil processing plant and the oil field hit this weekend could again "be targeted at any time."

In Vienna, U.S. Secretary of Energy Rick Perry condemned what he called "Iran's attack on the Kingdom of Saudi Arabia" in an address to the International Atomic Energy Agency's general conference.

"This behavior is unacceptable and they must be held responsible," Perry said of Iran. "Make no mistake about it, this was a deliberate attack on the global economy and the global energy market."

He added that "despite Iran's malign efforts, we are very confident that the market is resilient and will respond" and said that Trump has authorized the release of strategic oil reserves should the U.S. need them.

But actions on any side could break into the open a twilight war that's been raging just below the surface of the wider Persian Gulf in recent months.

Already, there have been mysterious attacks on oil tankers that America blames on Tehran, at least one suspected Israeli strike on Shiite forces in Iraq, and Iran has shot down a U.S. military surveillance drone.

Benchmark Brent crude gained nearly 20% in the first moments of trading Monday before settling down to over 8% higher as trading continued. A barrel of Brent traded up $5.33 to $65.55.

That spike represented the biggest percentage value jump in Brent crude since the lead up to the 1991 Gulf War that saw a U.S.-led coalition expel Iraqi dictator Saddam Hussein's forces from Kuwait.

U.S. benchmark West Texas crude was up around 8%. U.S. gasoline and heating oil similarly were up over 8% and 7% respectively before markets opened in New York.

Saturday's attack halted production of 5.7 million barrels of crude a day, more than half of Saudi Arabia's global daily exports and more than 5% of the world's daily crude oil production. Most of that output goes to Asia.

At 5.7 million barrels of crude oil a day, the Saudi disruption would be the greatest on record for world markets, according to figures from the Paris-based International Energy Agency. It just edges out the 5.6 million-barrels-a-day disruption around the time of Iran's 1979 Islamic Revolution, according to the IEA.

Saudi Arabia has pledged that its stockpiles would keep global markets supplied as it rushes to repair damage at the Abqaiq facility and its Khurais oil field.

Trump said the U.S. had reason to believe it knows who was behind the attack — his secretary of state had blamed Iran the previous day. He assured his Twitter followers that "we are ... locked and loaded" depending on verification and were waiting to hear from the Saudis as to who they believe was behind the attack and "under what terms we would proceed!"

A U.S. official said all options, including a military response, were on the table, but said no decisions had been made Sunday. The official spoke on condition of anonymity to discuss the internal deliberations.

Trump's "locked and loaded" comment mirrors similar remarks he made following Iran shooting down a U.S. military surveillance drone in June. However, the president said he pulled back from retaliating against Iran at the last minute.

U.S. officials also offered highly detailed satellite photos of the Saudi sites that show damage suggesting the attack came from the north, where Iran or Iraq are, rather than from Yemen to the south. Iraq's prime minister has denied the attack came from his country, where Iranian-backed Shiite rebels operate. Iraqi Premier Adel Abdel-Mahdi said he received a call Monday from Pompeo, without elaborating.

"The Americans adopted the 'maximum pressure' policy against Iran, which, due to its failure, is leaning toward 'maximum lies,'" Mousavi said.

On Monday, Mousavi dismissed as mere "speculation" media reports about a possible meeting between Trump and Iranian President Hassan Rouhani on the sidelines of the U.N. General Assembly later in September. The U.S. has said it will remain open for talks with Iran but Mousavi said a Trump-Rouhani meeting was not on the agenda.

The U.S. satellite photos appear to show the attack on Abqaiq may have struck the most-sensitive part of the facility, its stabilization area. The Washington-based Center for Strategic and International Studies has said the area includes "storage tanks and processing and compressor trains — which greatly increases the likelihood of a strike successfully disrupting or destroying its operations."

Stabilization means processing so-called sour crude oil into sweet crude. That allows it to be transported onto transshipment points on the Persian Gulf and the Red Sea, or to refineries for local production.

The attack "damaged five to seven spheroids and five out of ten stabilization towers," said Fernando Ferreira, the director of geopolitical risk at the Washington-based Rapidan Energy Group.

Five "or so stabilization towers appear to be destroyed and will have to be rebuilt — this will take many months," Ferreira said. "The sophisticated attack now seems likely to reduce Abqaiq's 7 (million barrels of crude oil a day) capacity for an indefinite period" measured in months.

Saudi Aramco did not respond to questions from The Associated Press regarding damage at Abqaiq and the satellite images.