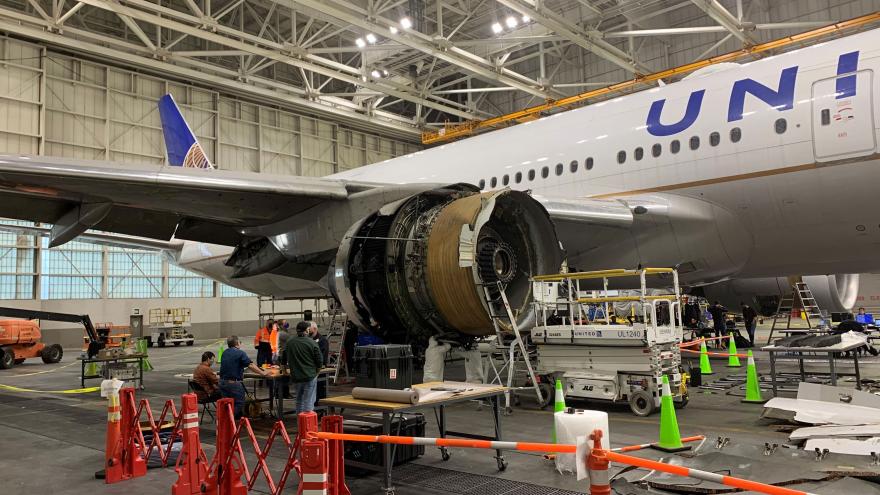 (CNN) -- The right engine of United Airlines Flight 328 failed with a fiery bang minutes after takeoff last month when the aircraft's pilots throttled up the engines to minimize expected turbulence, National Transportation Safety Board investigators said in an update Friday.

The NTSB update also said a fan blade that failed in the Boeing 777's engine had most recently received a close inspection for wear and tear in 2016 and was less than halfway to the point of requiring another inspection.

The new details are part of an update from the NTSB on its ongoing investigation into the incident, which took place February 20 in the skies above Denver and sent debris from the airplane raining down on a residential area in nearby Broomfield, Colorado. The plane returned to Denver International Airport safely with no injuries on board or on the ground.

The NTSB investigation typically takes a year or more to complete. The seven-page report released Friday did not make any conclusions about the cause of the incident nor did it prescribe further steps for the Federal Aviation Administration, aircraft operators, or the engine manufacturer to make.

According to the update, the flight crew was increasing power "to minimize time in expected turbulence" as the aircraft was climbing to its assigned altitude. The airspace around the Denver airport is known for turbulence, according to CNN affiliate KMGH.

"Immediately after the throttles were advanced a loud bang was recorded" on the cockpit voice recorder, the report said.

Travis Loock, a passenger on Flight 328, said it was about 20 minutes after takeoff that he heard a boom.

"There was a big boom and the kind of sound you don't want to hear when you're on the airplane," Loock, who was flying with his wife, told CNN in a phone call after the incident. "And I instantly put my shade up, and I was pretty frightened to see that the, the engine on my side was missing."

The flight data recorder indicated "the engine made an uncommanded shutdown and the engine fire warning light activated shortly after," the report said.

The pilots followed procedure to fight the fire, and determined they would not dump fuel to make the aircraft lighter before landing, the report said. They concluded that "the magnitude of the overweight landing was not significant enough to outweigh other considerations."

The report said a valve that cuts fuel flow to the engine in case of fire had properly closed and said "there was no evidence of a fuel-fed fire." The report cited damage to the "fuel, oil, and hydraulic lines."

The report said the engine flared up in flames after landing at the airport but that "was quickly extinguished" by firefighters.

Part that failed last inspected in 2016

Investigators said in the days after the incident that preliminary investigation indicated metal fatigue of one blade in the plane's right engine, and that the blade broke free at the hub, likely hitting another that was broken mid-span.

The NTSB report on Friday said the fan blade that failed was inspected using specialized thermal acoustic imaging technology in both 2014 and 2016. The inspection looks for tiny cracks or signs of metal fatigue which may not be visible to the naked eye.

After a 2018 engine incident on a different plane, the 2016 data was analyzed again, the NTSB said.

The report noted that when the fan blade failed last month, it was less than halfway to the point of requiring another inspection -- a detail CNN has previously reported. It had been operated 2,979 cycles, an approximate measure of how many times the engine has been turned on and off. Inspection was required after 6,500 cycles.

Days after the February incident, engine manufacturer Pratt & Whitney recommended dramatically shrinking the interval for the inspection to just 1,000 cycles, according to a service bulletin obtained by CNN. The FAA issued an emergency directive requiring the fan blades on the engines to be inspected before flying again.

The inspection interval for this engine series has been a concern for federal regulators. CNN previously reported a FAA review board met just days before the February engine failure to consider requiring more regular inspections.

In the wake of the engine failure, Boeing has recommended suspending the use of 777s that have the Pratt & Whitney 4000 engine, and United Airlines has already pulled its 777s following the incident. Both the FAA and the NTSB are investigating.

CNN aviation analysts said at the time that such an engine failure was more likely to occur at takeoff, when the aircraft needs more power from the engines.

The flight was bound for Honolulu when passengers reported hearing a loud boom. Approximately 240 people were on board, and some looked out their windows to see an exposed engine spewing flames as pieces of the plane fell away.

"We looked at each other, my wife and I, held hands, and just wished our kids that we'd see them again," Bob Brown told CNN affiliate KCNC.

Brenda Dohn was traveling with her kids when she saw smoke outside the window.

"My daughter was sitting on the window and I was just like, 'Don't look, let's close it up, and let's just pray,'" Dohn told CNN affiliate KUSA.

Once the plane was safely back on the ground, passengers cheered before exiting the aircraft. And Loock got the chance to calm his nerves before getting ready for the rest of his journey.