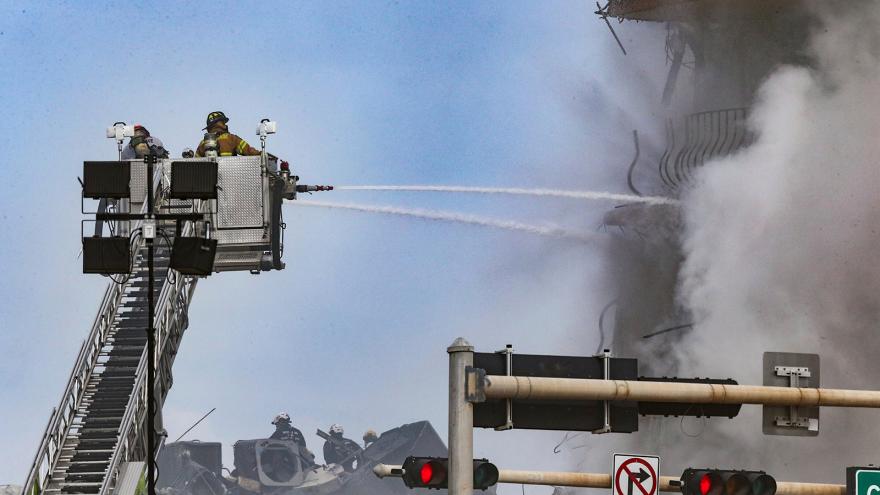 (CNN) -- Nearly three years before Thursday's deadly partial collapse of a South Florida residential building, an engineer raised concerns about structural damage to the concrete slab below the pool deck and "cracking and spalling" located in the parking garage, according to documents.

A structural field survey report from October 2018 was included in a series of public records documents that were published overnight on the Surfside, Florida, town website. The New York Times was the first media outlet to publish a story about the field survey report.

It was released as rescuers continue to scour the rubble at Champlain Towers South in Surfside. Part of the building collapsed early Thursday, killing at least four and leaving at least 159 unaccounted for, officials said.

The report said the waterproofing below the pool deck and entrance drive was failing and causing "major structural damage."

The report further noted that "the replacement of the existing deck waterproofing will be extremely expensive...be disruptive and create a major disturbance to the occupants of this condominium building."

The report, the goal of which was to "understand and document the extent of structural issues," detailed signs of "distress/fatigue" in the parking garage.

"Abundant cracking and spalling of various degrees was observed in the concrete columns, beams and walls. ... Though some of this damage is minor, most of the concrete deterioration needs to be repaired in a timely fashion."

The 2018 report also noted that "many of the previous garage concrete repairs" were "failing."

An attorney for the building's condominium association, Kenneth Direktor, previously warned against early speculation. The building, he told CNN on Friday, had been subject to a series of inspections "over the last several months" as part of its milestone 40-year safety certification process.

"Nothing like this was foreseeable," Direktor said. "At least it wasn't seen by the engineers who were looking at the building from a structural perspective."

CNN reached out to Direktor on Saturday for comment.

Surfside Mayor Charles Burkett on Saturday recommended that residents of the nearby north tower of the complex evacuate out of "an abundance of caution."

"I don't think people need to live with the possibility, or the even the thought that their" building may collapse, Burkett told CNN.

Burkett said he has not seen the 2018 report but that it's still "unclear what steps the building was taking to address ... cracks" mentioned in the document.

"We need all this information, we need all this evidence, and we are going to get to the bottom of what happened at this particular building," she said.

Officials have not determined a cause of the collapse.

The building was undergoing the certification process, and the board only knew what the engineer's certification report included in terms of repair work, she said.

Donna DiMaggio Berger, an attorney for the Champlain Towers condo association, said board members did not know any information that would have foreshadowed Thursday's disaster.

"Typical things that an engineer looks for in a certification report in Miami-Dade and Broward County, which are the two counties that require this kind of certification, is a review of the roof, the HVAC system, electrical, plumbing, and the building envelope," Berger told CNN.

"But certainly, there was nothing hazardous that was outlined in that report, anything that would have proven to be a danger to life."

A class-action lawsuit filed Thursday claims that the association of the collapsed condo is responsible for "failures to secure and safeguard" the lives and property of condo owners.

Officials remain focused on the search for the dozens of people believed to be under the mountain of rubble as an expert suggested it may be months before the cause of the disaster is known.

While anxious family members awaited some news -- and the search continued through the night -- officials urged for a powerful sentiment: Hope.

"I am holding out hope because our first responders tell me they have hope," Levine Cava told CNN. "They are the ones on the ground. They are in the tunnels; they're in the water; they're on top of the rubble pile. They're helping to sift through using the cameras, the dogs, the sonar, and they say they have hope."

An emotional Miami-Dade Fire Rescue Chief Andy Alvarez echoed the sentiment in an interview with CNN's Wolf Blitzer. "There's always hope," he said. "We're doing everything we can to bring your family member out alive."

Three of the four victims have been identified, according to Dr. Emma Lew, director of the Miami-Dade County Medical Examiner Department. One victim died at a hospital. No other information was provided Friday.

About 55 of the 136 units at the building a few miles north of Miami Beach collapsed at around 1:30 a.m. Thursday, leaving huge piles of rubble on the ground and materials dangling from what remained of the structure, officials said.

Thirty-five people were rescued from standing portions of the building by first responders, Jadallah said Thursday.

The number of people unaccounted for rose to at least 159 from 99, Cava said Friday. She added the figure refers to those who may have been within the complex.

"So those are people that maybe live there, but we don't know whether they were there at the time," Cava said.

Officials do not know how many people were in the building at the time of the collapse, Surfside Town Manager Andy Hyatt said.

Among the missing are Vishal Patel, his wife Bhavna Patel, their 1-year-old daughter Aishani Patel, and their niece Sarina Patel told CNN, adding that Bhavna Patel is four months pregnant.

Sarina Patel told CNN's Chris Cuomo on Friday that she last spoke to her family on Father's Day.

"I had actually called them to tell them I had just booked a flight to come visit because they've been asking me to come see their home and to meet their daughter I haven't met her due to the pandemic," Sarina Patel said.

They were home at the time the collapse took place, Sarina Patel told Cuomo.

"We have tried calling them countless of times and there's just been no answers, text messages, nothing," she said. "They haven't contacted anybody."

Mystery over the cause of the collapse

The cause of the collapse remains unknown, and an expert told CNN that the conclusion could take months.

Kobi Karp, an architect and Miami resident, said forensic engineering will be required to determine the cause.

"This is an event that we have never had before. You can look at it; you can speculate how it happened. But at the end of the day, it will take us months to figure out," he explained.

He added that a portion of the building collapsing while the other stood is a "mystery."

"At the end of the day for this to crash like this is a very unique and special situation," Karp said.

Structural engineer Kit Miyamoto also spoke to CNN on Friday night about possible causes, including that it could be corrosion of the metal inside the column, or settlement or sinking of one area of ground at a different rate than others, or a combination of different factors.

"The question is why the column failed?" he said. "A building is actually hard to collapse. There's a lot of redundancies in the building system. That's why you don't see collapses like this."

Miyamoto pointed out that even in places like California where big earthquakes are common, collapses such as this are extremely rare.

Search efforts continued throughout the night, with crews from Miami-Dade Fire and Rescue working alongside three other state task forces, Miami-Dade Fire Chief Alan Comisky said. International crews from Mexico and Israel arrived on the scene to help on Friday.

The Federal Emergency Management Agency said it sent three Urban Search and Rescue teams to assist with the search.

Additionally, structural engineers have been shoring up other places -- such as areas near a parking garage underneath the rubble -- to allow crews to tunnel underneath with light machinery.