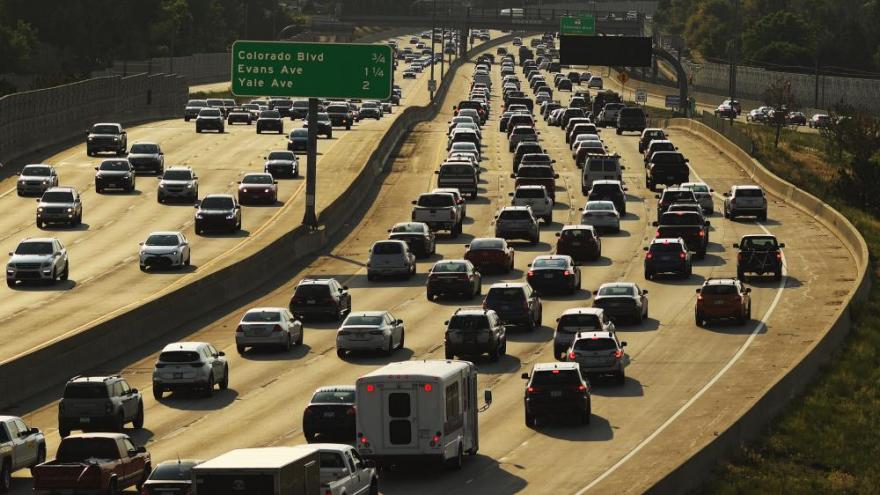 The Environmental Protection Agency on Monday will tighten fuel emissions standards for cars and light trucks to 40 miles per gallon by the 2026 model year.

(CNN) -- The Environmental Protection Agency on Monday will tighten fuel emissions standards for cars and light trucks to 40 miles per gallon by the 2026 model year, replacing the looser Trump-era standards.

The new standards will save consumers money on fuel and prevent billions of tons of planet-warming carbon dioxide from being released into the atmosphere.

The EPA said that by 2026, the requirements will be "the most ambitious greenhouse gas standards ever set for the light-duty vehicle sector in the US."

"The final rule for light duty vehicles reflect core principles of this Administration: We followed the science, we listened to stakeholders, and we are setting robust and rigorous standards that will aggressively reduce the pollution that is harming people and our planet -- and save families money at the same time," EPA Administrator Michael S. Regan said in a statement.

UAW President Ray Curry praised the new rules, calling it a "win-win for UAW members, the U.S. manufacturing workforce and our environment."

"Well thought out regulations, such as the Biden Administration's emission rules today, will promote long-term U.S. investments while they protect and expand good paying union jobs in vehicle production and advanced technologies that will allow manufacturers the flexibility necessary to meet these standards," Curry said.

The lower Trump-era emissions standards, known as SAFE standards, were a rollback of Obama administration rules on cars and would have only increased to just 32 mpg in mileage year 2026. The new standards are also an increase from the Obama EPA's rules, which would have gotten cars and trucks to 36 mpg.

The rule will be published in the Federal Register by the end of the year and will go into effect 60 days after. The EPA is also starting to work on tighter fuel standards for mileage year 2027 and beyond.

"We went backwards under President Trump and we lost a lot of momentum," said Margo Oge, Chair of the International Council on Clean Transportation, and a former Obama EPA official who helped draft that administration's emissions rules. "These standards will bring the country ahead again but we have so much more work to do."

According to an agency fact sheet, the new standards will prevent 3.1 billion tons of planet-warming CO2 emissions from being pumped into the atmosphere, reduce US gasoline consumption by 360 billion gallons and save US consumers money at the pump.

The EPA also said the new rule would help shift the US car market towards electric vehicles, which currently make up a miniscule portion of the cars Americans drive. Electric vehicles and plug-in hybrids accounted for just 2% of US vehicle production in 2020, according to an EPA estimate. The agency said the new final rule could get EVs to a 17% market share by mileage year 2026.

John Bozzella, President and CEO of the Alliance for Automotive Innovation, said in a statement that the organization is "committed to achieving a cleaner, safer, and smarter future," but that collaboration between the industry and government will be necessary to meet the new standards.

The new rules go hand-in-hand with Biden's ambition to transition to zero-emissions vehicles, and "will unlock literally hundreds of billions in fuel savings for American consumers," Ali Zaidi, Deputy National Climate Advisor, said in a statement. "It's part of a broader win-win playbook for our consumers, workers, and environment."

In August, Biden announced a goal that half the vehicles sold in the US by 2030 would be battery electric, fuel-cell electric or plug-in hybrid. That goal hit a roadblock this weekend, as West Virginia Sen. Joe Manchin announced he was opposed to Biden's Build Back Better bill, which contains a proposed $320 billion for clean energy and electric vehicle tax credits.

Dan Becker, director of the Safe Climate Transport Campaign at the Center for Biological Diversity, said in a statement the new rules were "Biden's best chance to keep his promise to protect us from what he calls global warming's existential threat," but they aren't strong enough.

"Before this presidential term ends, the administration must issue long-term standards strong enough to usher in the age of electric vehicles," Becker said. "They must close the loopholes and force automakers to actually deliver electric vehicles, rather than just churning out promises to make them."

EV tax credits are important to lower the cost of EVs and make them more attainable for middle- and low-income consumers. Another part of Biden's EV agenda -- $7.5 billion for a national network of EV chargers -- has already passed as part of the bipartisan infrastructure law.

"These financial incentives are very important," Oge said. "You need both, you need federal standard requirements and you need incentives."

This story has been updated with reaction from auto industry organizations.