Epic v. Apple: The legal challenge that could remake the future of the digital economy 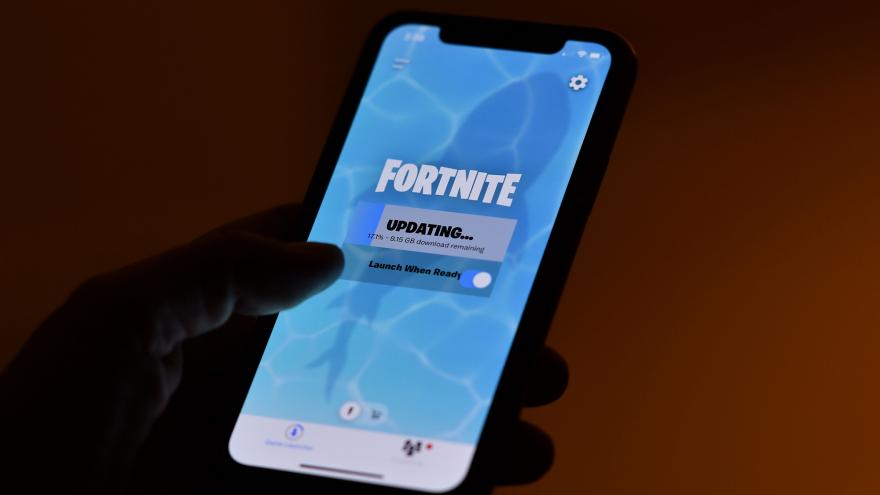 In a trial starting May 3, the judge will consider whether Apple is justified in requiring many app makers — and by extension, consumers — to use the company\'s payments technology. The potentially landmark trial stems from a lawsuit filed by the maker of the hit video game Fortnite, which Apple booted from its platform last summer for not complying with its rule. - Chris Delmas/AFP/Getty Images

(CNN) -- Ever since it was launched in 2008, the Apple App Store has been the sole gatekeeper between apps and iPhones and iPads. Other platforms, such as Google's Android, allow apps to be downloaded through third-party app stores. For any developers who want on to Apple's mobile devices, though, the choice is simple — it's the App Store or nothing.

Because it has set things up this way, Apple wields huge power over the terms it can dictate to app makers. One in particular has become a thorny issue, even if most consumers are unlikely to notice it: Any time you buy a digital product or service on many iOS apps, it is processed on an Apple-run payment system, and Apple collects a 30% fee from that.

Now, a federal judge is slated to decide: Is Apple's policy just a hugely successful business model — or is it a violation of US antitrust law?

In a trial starting Monday, the judge will consider whether Apple is justified in requiring many app makers — and by extension, consumers — to use the company's payments technology. The potentially landmark trial stems from a lawsuit filed by the maker of the hit video game Fortnite, which Apple booted from its platform last summer for not complying with its rule.

The high-profile case will involve witnesses including Apple CEO Tim Cook and his top lieutenants. Representatives for Facebook and Microsoft are also expected to testify. Corporate emails and presentations could fuel a fierce courtroom battle over app store policies, which are increasingly under scrutiny by regulators in Europe, lawmakers in the United States and many others.

The judge's ruling — and, of course, the appeals that will almost certainly follow — could have huge ramifications not only for Apple and its iOS ecosystem, but potentially for other app stores and the overall app economy, which has grown to hundreds of billions of dollars and supports millions of jobs. It's a case that could either transform the way many in-app purchases work, or entrench the power tech platforms have to set the rules of an increasingly digital world.

As Silicon Valley's expanding reach has moved Congress to propose new laws aimed at restraining the tech industry's biggest players, the outcome of the case may even shape the broader future of tech regulation.

With the update, players were encouraged to buy virtual currency (used for items such as in-game outfits and emotes directly from Epic, rather than from within the Fortnite app. Players who used Epic's payment system would receive a discount reflecting a portion of Apple's fees, the company said.

That's when Epic sued and further escalated matters by launching a flashy publicity campaign with the hashtag #FreeFortnite. It even released an ad that satirized, beat for beat, Apple's famous "1984" advertisement.

With the suit, Epic alleges that Apple holds a monopoly on the distribution of iOS apps, and that Apple's rules around payments are illegal because they shut out potential rivals.

The result, Epic has alleged, are higher prices for iOS users and less innovation in the app marketplace. If it weren't for Apple's rules, Epic would launch its own iOS app store and offer cheaper payment systems, the company has said in court filings.

But right now, "Epic is forced, like so many other developers, to charge higher prices on its users' in-app purchases on Fortnite in order to pay Apple's 30% tax," the company wrote in its initial complaint.

Apple disputes that it operates a monopoly, arguing that consumers — and Fortnite fans — aren't forced into using Apple devices or Apple's app platform. The 30% fee it collects on app transactions is comparable, it says, to the 30% commissions charged by other app stores and digital storefronts for video games. And it was Epic that went out of its way to engineer a legal crisis so that it could bring the lawsuit in the first place, Apple argues, citing what it describes as an "intentional act of sabotage" by Epic to break its contracts with Apple.

The trial is sure to have some lively moments, as the two sides have already sparred in front of the judge hearing it, Yvonne Gonzalez Rogers, who was nominated by President Barack Obama in 2011 to serve on the US District Court for the Northern District of California.

Epic's decision to immediately sue and push to publicize its fight suggested it knew how events would unfold — something Epic's lawyers have acknowledged.

"When you are taking on the biggest company in the world, and you're taking it on where you know it's going to retaliate, you don't lie down in the street and die," Epic's attorney, Katherine Forrest, said in one appearance before the judge. "You plan very carefully on how you're going to respond."

Records introduced during the pre-trial process showed that Epic developed a whole campaign to challenge Apple, called Project Liberty, of which the Fortnite app update and promotion were a critical part. Apple argues the existence of Project Liberty shows the game company was acting in bad faith from the start, because the entire crisis was premeditated. Further, it has argued that Epic is interested in its own profits, not competition.

"It initiated its 'Project Liberty' campaign as a means of reducing the price for which it must pay for the use of Apple's intellectual property, and initiated this litigation under the pretense that it simply wants to aid competition, not to boost its own profit margins," Apple claimed in a recent court filing.

Epic has conceded that it broke the terms of its contract with Apple, but justified doing so as a reasonable response to alleged illegal behavior by Apple.

The central idea behind Epic's lawsuit is that Apple allegedly used its exclusive ability to sell iOS apps as a form of monopolistic leverage. Apple rejects that premise, arguing that there is no monopoly to speak of, so there can be no antitrust violation.

Apple's store may be the only place for users to download iOS apps, but it isn't the only place users can find Fortnite or other video games, Apple argues. Apple is, of course, part of a broader market of video game distributors that includes Microsoft, Sony, Nintendo, Valve and Epic itself, all of which operate their own video game software stores. Besides, Apple has argued, its platform rules exist for good reasons, such as ensuring that consumers can't be targeted by malicious app makers.

It's not illegal to have a monopoly under US law; it's only illegal to try to preserve a monopoly at the expense of competition. By portraying itself as part of a competitive market of video game sellers, Apple seeks to avoid both criticisms.

Much of the case could hinge on this framing exercise, as well as the underlying justifications for Apple's store rules.

"The question at the heart of it," said Adam Kovacevich, founder of Chamber of Progress, a tech advocacy group backed by Google, "is this: 'Does Apple as the marketplace owner — do they have rights, essentially, to run their marketplace as they like?'"

Some legal experts say that, from a competition perspective, things are more complicated.

"Once people are in an ecosystem, they are very locked in," said John Bergmayer, an attorney at the consumer advocacy organization Public Knowledge. "I have an investment in the apps I bought, I have all kinds of data and stuff. It would be a huge hassle to switch, and so most people just don't."

Scrutiny of app store policies has spiked internationally in the past year amid a wider turn against Big Tech . European officials announced a probe of Apple's rules last summer. British authorities said in March they, too, were investigating. Last month Apple was fined $12 million in Russia over alleged anti-competitive app store policies; the company has disputed the allegations.

Last year, an investigation and report by the House Judiciary Committee's antitrust panel concluded that Apple, Amazon, Facebook and Google enjoy "monopoly power" and have exercised it in ways that have hindered innovation and reduced consumer choice.

Apple and Google were forced to defend their app store policies before a US Senate hearing last month led by the powerful antitrust subcommittee. Major app companies including Spotify, Tile and Match Group — which owns the dating app Tinder — accused Apple and Google of everything from exorbitant marketplace fees to retaliation for refusing to comply with the platforms' terms.

Apple and Google rejected those allegations, arguing in the hearing that their platform policies help ensure the safety and security of their app stores and that they do not engage in retaliatory behavior. But prominent lawmakers were not persuaded; subcommittee chair Sen. Amy Klobuchar vowed to investigate claims of retaliation and Sen. Mike Lee, the panel's top Republican, called Apple and Google's power over Americans "unprecedented."

At several points, both lawmakers quoted directly from documents filed in the Epic case.