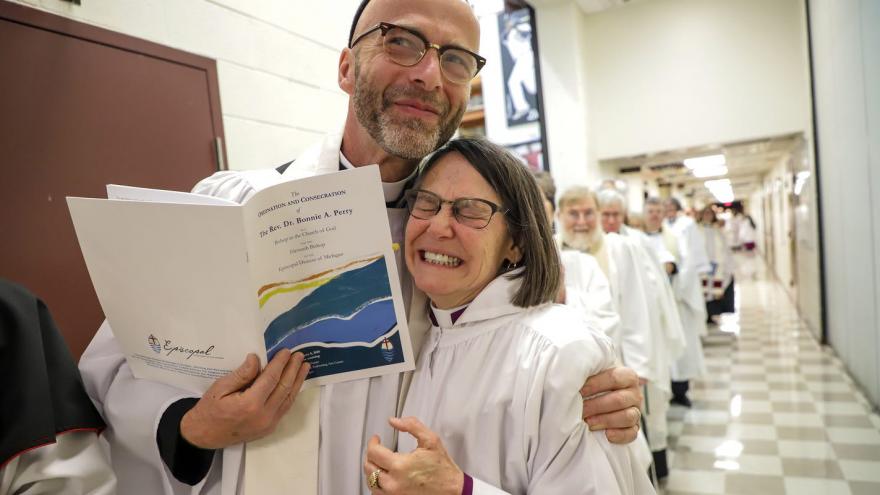 (CNN) -- The Episcopal Diocese of Michigan on Saturday ordained and consecrated Dr. Bonnie Perry as its first female and openly lesbian bishop at a ceremony in Dearborn.

Perry said the ceremony was "one of the most intense experiences" of her life, as she was surrounded by clergy and community members who came to welcome her into the diocese.

She said she wants to help all communities and people feel at home.

"For me, it's about full inclusion for all people -- straight, gay, bi, trans, gender fluid -- this is about everyone, all are welcome," Perry said. "Every time you exclude someone you exclude the possibility of change and transformation."

Perry received 64 clergy votes and 118 lay votes to be elected bishop; she needed a minimum of 55 clergy votes and 94 lay votes. All the candidates up for the position of bishop were women, according to the Episcopal Diocese of Michigan. The diocese was formed in 1836.

Perry was first ordained deacon and priest 30 years ago in the Diocese of Newark, New Jersey, and was the pastor at All Saints' Episcopal Church in Chicago since 1992. She succeeds Rt. Rev. Wendell N. Gibbs Jr. who had been the bishop of the Episcopal Diocese of Michigan since 2000.

Perry grew up in a devout Irish Catholic family, but as a woman and a lesbian, she could not imagine a future for herself as part of the Roman Catholic church, she said.

"In the Episcopal Church I saw women-- straight and gay-- who were living out God's call," she said.

Perry wants to 'bridge the gap'

Perry and her partner, who is a pastor, have been together for 32 years, and they've been married "as long as it's been legal in our country," she said.

Perry has previously written about how she is excited to work with the "diversity of people, cultures, races, classes and ethnicities" in Southeast Michigan, noting that she is an attentive listener who is able to bring people together, regardless of their backgrounds.

Perry wants to help "bridge the gap" between different communities in Detroit, she told CNN.

"As we know, our country right now is deeply polarized and I think part of that is because people have perspectives from one place and then from another, and we're not actually spending time listening to each other."

Perry's personal goal is to visit every single congregation that is part of The Episcopal Diocese of Michigan, she said. The diocese has 95 congregations in southeastern lower Michigan, and 18 of those are in Detroit, according to its website.

"Jesus was always out and about and talking to people, people who were always on the margins," Perry said, noting that she plans to do just this.

Perry was seated as bishop on Sunday at the Cathedral Church of St. Paul, which will mark her first full day as a bishop.

"I'm in awe of the responsibility and I'm so excited by the possibilities," she said.