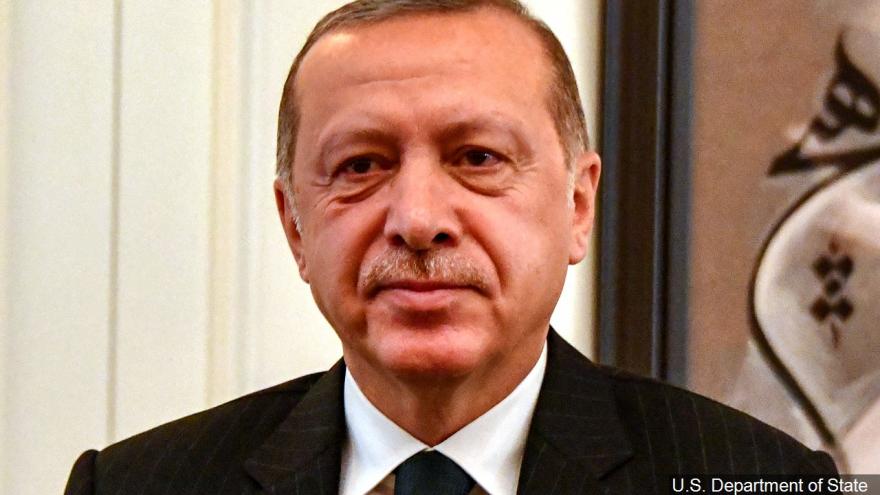 Recep Tayyip Erdogan is a Turkish politician serving as President of Turkey since 2014., Photo Date: 10/17/2018
By Helen Regan and Taylor Barnes, CNN

(CNN) -- Turkish President Recep Tayyip Erdogan has dismissed US calls for a ceasefire in northern Syria and said that he's not worried about American-imposed sanctions,or the advancement of Russian-backed Syrian forces toward the Turkish border.

Erdogan's comments come as Russian-backed Syrian regime troops on Tuesday gained control of the town of Manbij and surrounding areas, until recently an active US military outpost.

Russia has stepped up its role in the Syrian conflict by deploying military police to the country's north -- filling a vacuum left by the withdrawal of US troops from the area.

Russian units are patrolling a contact line between Syrian and Turkish forces, according to a statement by Russia's Defense Ministry. On Tuesday, Russia's presidential envoy on Syria, Alexander Lavrentiev, told state news agency TASS that Moscow "won't allow" clashes between Turkish and Syrian forces on the ground.

After Turkey launched a long-threatened offensive across the border into Kurdish-controlled northeastern Syria last week, local Syrian Kurdish leaders struck a deal with Syria's government in Damascus to enforce the border.

The Syrian Democratic Forces (SDF) who operate in the area are led by the Kurdish People's Protection Units (YPG), which Turkey considers a terrorist organization affiliated with the separatist Kurdistan Workers' Party (PKK). The SDF, however, are US allies that were considered instrumental in the fight against ISIS in northern Syria.

Turkey's offensive, called the Peace Spring Operation, is aimed at clearing Kurdish forces away from its border area and resettling 2 million Syrian refugees currently hosted in Turkey into a 30 kilometer (18.6 mile) "safe zone" along the border.

On Tuesday, the Trump administration said it was dispatching Vice President Mike Pence, Secretary of State Mike Pompeo and national security adviser Robert O'Brien as part of a delegation departing to Ankara Wednesday, to broker a deal to stop the Turkish military operation in Syria.

The delegation's planned departure comes after President Donald Trump announced sanctions against Turkey and threatened to "destroy" the country's economy if it does not halt its incursion.

It marks an attempt by the White House to adopt a firmer stance after facing harsh criticism from Republican lawmakers and senior national security veterans for withdrawing US troops from northern Syria, paving the way for Turkey's military offensive.

But Erdogan told reporters onboard the presidential plane Tuesday that his government is "not worried" about any US sanctions.

"They are pressuring us to stop the operation (in northern Syria). They are announcing sanctions. Our goal is clear. We are not worried about any sanctions," he said.

Erdogan not concerned about Syrian forces

According to the Russian Defense Ministry, Syrian government forces have taken control of two areas in northern Syria on Tuesday -- more than 1,000 square kilometers around the town of Manbij and an area in Raqqa around the town of Tabqa.

Erdogan said Tuesday that Syrian regime forces entering Manbij was "not very negative for me" so long as Kurdish "terrorists" are cleared from the region.

"It's their lands after all. But what is important to me is that the terrorist organization does not remain there," he said.

The Turkish president said he told Putin, a key ally of the Syrian government, that "if you are clearing Manbij of terrorist organizations, then go ahead, you or the regime can provide all the logistics. But if you are not going to do this, the people there are telling us to save them."

Erdogan also told reporters that the latest delivery of a Russian-made S-400 missile defense system -- which Washington opposes Ankara buying -- will arrive in November or December.

The first delivery of components arrived in July and Erdogan's comments are likely to further rile up US officials, who have threatened to level sanctions against Turkey if the system ever became operational.

The State Department had repeatedly warned that "Turkey will face very real and very negative consequences if it completes the delivery of the S-400," as spokesperson Morgan Ortagus said at the end of May.

Away from the halls of power in Ankara and Washington, hundreds of thousands of Syrians are facing a desperate situation, with reports of medical facilities and civilian infrastructure being targeted.

More than 275,000 people have been displaced, including 70,000 children, from cities and towns in northern Syria, the Kurdish Administration of Northern and Eastern Syria said Tuesday.

The SDF said 75 Syrian civilians have been killed and more than 450 wounded since Turkey began its offensive last week.

Separately, the Kurdish Red Crescent said 42 civilians have been killed, as well as 145 injured and more than 190,000 displaced.

There are also reports that medical facilities are being targeted. The UNHCR said four health facilities were damaged in the areas of Ras al-Ain, Ain al-Arab, Tel Abyad and al-Malikya on October 11, and the following day a medical point belonging to the Kurdish Red Crescent was directly hit and damaged by an airstrike.

The UNHCR said the damage is "a result of what were alleged to be airstrikes and ground-based strikes by Turkish forces and affiliated armed groups."