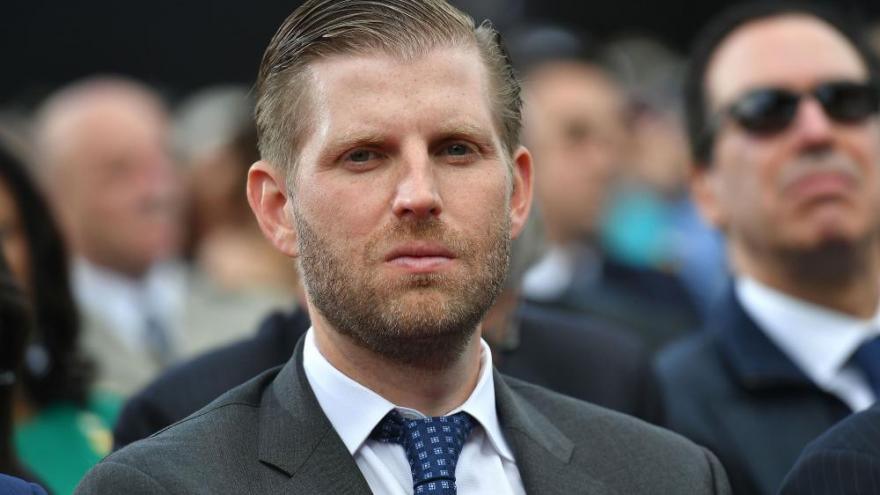 Businessman and son of the president, Eric Trump, attends a French-US ceremony at the Normandy American Cemetery and Memorial in Colleville-sur-Mer, Normandy, northwestern France, on June 6, 2019, as part of D-Day commemorations marking the 75th anniversary of the World War II Allied landings in Normandy.

(CNN) -- Eric Trump, who runs day-to-day operations of the family real estate empire, is scheduled to sit for a deposition on Monday as part of the New York attorney general's investigation into whether the Trump Organization improperly inflated the value of its assets to obtain loans or tax benefits.

The deposition follows a court battle over whether he would sit for testimony and provides a key step in the New York civil investigation into the Trump Organization.

Trump, the middle son of President Donald Trump and executive vice president of the Trump Organization, has taken over day-to-day operations of the real estate business since his father became president. His deposition schedule was disclosed in a court filing made on Friday.

New York lawyers have said they want to interview Eric Trump as part of their investigation into whether the Trump Organization and Donald Trump "improperly inflated the value of Mr. Trump's assets on financial statements in order to secure loans and obtain economic and tax benefits."

One specific area that investigators are looking into is a conservation easement Trump took for Seven Springs. New York investigators said in court filings that Donald Trump "apparently" took a $21 million income tax deduction on the lost development value to the property.

Investigators are seeking to interview Eric Trump under oath because of his "direct involvement" in specific areas under investigation, including a conservation easement taken on a Trump-owned property in Bedford, New York, known as Seven Springs. The New York lawyers said they are seeking information about the valuation provided on the conservation easement, noting Eric Trump was "intimately involved" in the development efforts on the property.

Lawyers for Eric Trump could not be reached for comment Monday.

The New York investigators went to court in late August to enforce a subpoena for Trump's testimony after he canceled his scheduled appearance in July.

In July, according to the New York lawyers, Trump's attorney sent a letter to the attorney general saying he would invoke "those rights afforded to every individual under the Constitution" as justification not to testify. At the time, the US Supreme Court had just ruled that the state grand jury subpoena for Trump's financial records and tax returns was valid. That subpoena was issued as part of the Manhattan district attorney's criminal investigation. Trump has challenged that subpoena again.

The New York lawyers asked a judge to enforce the subpoena for his testimony and documents. Trump's lawyers then said he would agree to sit for an interview but only after the election. Last month, the judge set the deadline for this Wednesday.

New York investigators are also seeking the testimony of a land use attorney that was involved with the property and aborted plans to develop a residential subdivision on the property. In addition, they also are seeking an interview with Trump's tax attorney.