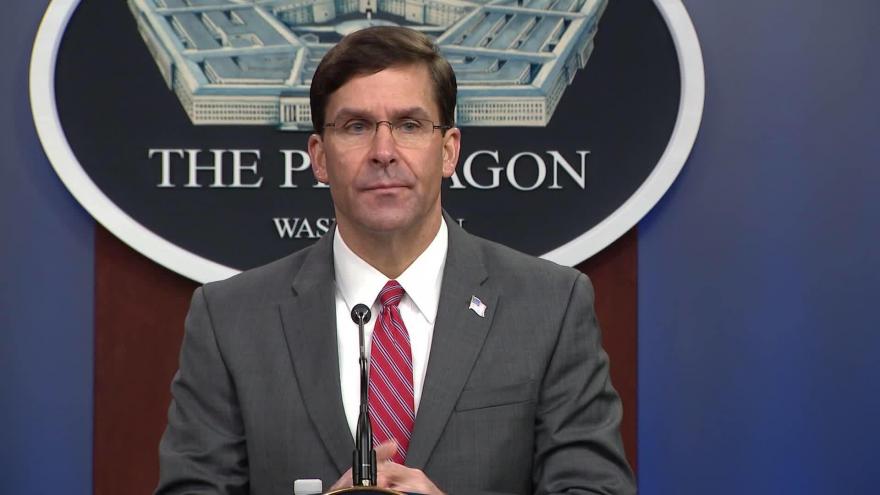 Secretary of Defense Mark Esper is consulting senior military commanders and department officials about what steps need to be taken to address racial inequality in the military and how to improve representation and opportunities for black service members, several administration officials tell CNN.

(CNN) -- Secretary of Defense Mark Esper is consulting senior military commanders and department officials about what steps need to be taken to address racial inequality in the military and how to improve representation and opportunities for black service members, several administration officials tell CNN.

Although Esper and other top officials have served in various positions for years, they have been taken aback by some of the videos and messages posted by black service members in recent weeks, officials say. The problem, one official said, is simply, "How do we make the force better?"

It is not yet clear, officials said, how Esper plans to make any meaningful changes and whether changes in policy are needed to deal with potential institutional bias. All the officials confirmed that Esper wants to take a broader look beyond renaming military bases bearing the names of Confederate generals and banning displays of the Confederate flag.

But the challenge of getting the White House on board looms large over any broad changes in the military. President Donald Trump has declared himself "your president of law and order" in response to ongoing protests decrying police brutality and institutionalized racism, remained steadfast in his desire to see statues of Confederate leaders remain standing and opposed a push to remove Confederate commanders' names from American military bases.

But it is a problem now impossible for the Pentagon to ignore, as top military officials are rapidly moving to address it and are already acknowledging the problem is something they should have been aware of and dealt with. And evidence shows the racial disparities in the military to be pervasive -- a CNN review of data provided by the Pentagon and Department of Veterans Affairs reveals the stark reality that black service members are less likely to become officers and, as a result, are more likely to be seriously injured serving their country than their white colleagues.

Gen. Robert Abrams, commander of US forces in South Korea, told a town hall earlier this month that "from my time of service, I've tried real hard to be part of the solution, and it was really difficult for me to come to grasp this week that I have fallen way short in helping eliminate racism and bigotry in our own ranks."

A video posted by Air Force Gen. Charles Brown about his experience as a four-star general and a black man deeply resonated at the senior ranks, coming just before Brown is scheduled to take over as head of the Air Force and become the first black officer to lead a military service.

As Esper tries to craft a way ahead, his challenge is how to navigate delicate territory between the White House -- which feels this may force them into policy changes Trump doesn't want -- and several members of the Joint Chiefs of Staff and senior regional commanders, who have a sense of urgency about moving ahead.

In one case, Esper will have to decide if he wants to weigh in on banning any display of the Confederate flag in public or common spaces at military and Defense Department installations. Esper had contemplated the move for several days.

Abrams issued a memo on Monday to all troops ordering "the removal of all display of the Confederate Battle flag or its depiction" in any workspaces, common access or public areas -- appearing to make him the first regional commander to weigh in at the highest levels. Several military officials had told CNN last week they expected the issue of the flag to be decided by each of the chiefs as an individual issue impacting each service and weren't even certain Esper would get involved.

"The Confederate Battle Flag does not represent the values of US Forces" in South Korea, Abrams wrote. "While I acknowledge some might view it as a symbol of regional pride, many others in our force see it as a painful reminder of hate, bigotry, treason and devaluation of humanity."

Abrams added that "regardless of perspective, one thing is clear; it has the power to inflame feelings of racial division. We cannot have that division among us."

"I am mindful that many people believe that flag to be a symbol of heritage of national pride," he said. "But I am also mindful of the feelings of pain and rejection of those who inherited the cultural memory and present effects of the scourge of slavery in our country."

Like Abrams, the Marine Corps commandant emphasized the military cannot have divisiveness inside the ranks of a fighting force.

The Army and Navy were also working on plans to ban the flag, but had not published official guidance. The Army plan had been to ban the flag and all other divisive symbols but the service was asked to wait until Esper makes his initiative public, a defense official said. The Navy is in the early stages of deciding how it wants to proceed.