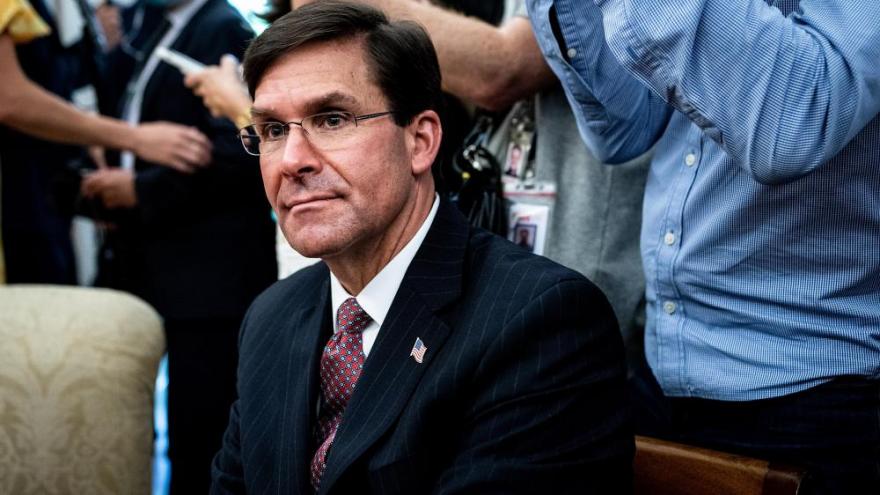 U.S. Secretary of Defense Mark Esper sent a memo earlier this month to the White House warning conditions weren't met for troop withdrawal from Afghanistan. In this image, Esper attends a White House meeting on June 24, 2020 in Washington, DC.

(CNN) -- Then-Secretary of Defense Mark Esper sent a classified memo earlier this month to the White House asserting that it was the unanimous recommendation of the chain of command that the US not draw down its troop presence in Afghanistan any further until conditions were met, sources familiar with the memo tell CNN.

The assessment from the chain of command -- Esper, US Central Command leader Marine Gen. Kenneth "Frank" McKenzie and commander of NATO's mission in Afghanistan Gen. Austin Miller -- stated that the necessary conditions had not been met. Others agreed, sources tell CNN, including Chairman of the Joint Chiefs of Staff Gen. Mark Milley.

The memo is believed to have been one of the main reasons why outgoing President Donald Trump fired Esper last week. CNN reported on Monday that US military commanders are anticipating that Trump will give a formal order as soon as this week to begin a further withdrawal of US troops from Afghanistan and Iraq before he leaves office on January 20. The memo was first reported by The Washington Post.

A senior administration source said the Esper memo expressed concerns that further reductions with conditions unmet could alienate US allies, who currently provide more service members in Afghanistan than the US.; risk "Green-on-Blue" attacks on American service members by anxious Afghan soldiers; erode the credibility and standing of the US around the world; impact the Afghan military, which relies on US "enablers" such as logistics and air support; and, perhaps most importantly, undermine efforts to get the Taliban to live up to their end of the peace agreement.

Officials at both the State Department and the Pentagon, according to this source, questioned why the Taliban would continue negotiating a peaceful end to the conflict with the US leaving anyway.

Despite the President firing him last week, Esper never saw the issue as a matter of whether US service members should be in Afghanistan, sources tell CNN. The former defense secretary has said the US should get out to focus on China and Russia and that Afghanistan is not a vital national interest, though it cannot be allowed to become a haven for terrorists who want to attack the US, sources tell CNN. Esper said much of this publicly during his tenure.

But Esper pushed back on Trump's timeline for further withdrawal because of the need for conditions to be met -- specifically a reduction in violence, progress at the negotiating table and a credible pledge from the Taliban to publicly renounce al Qaeda, among other terrorist groups. Moreover, Esper wanted the drawdown to be done in a coordinated and deliberate manner, and not in a rushed way.

In June, the Pentagon agreed to a drawdown to 4,500 service members by this month with the intention of pausing to ensure these conditions would be met. But not waiting for that would be rushing the decision to the door, Pentagon leaders argued, and a precipitous withdrawal could actually hurt the national security of the US.

US military officials have long stressed that the withdrawal from Afghanistan should be conditions based, even as Trump made bringing American troops home a theme of his reelection campaign.

National security adviser Robert O'Brien has advocated for a more accelerated withdrawal from Afghanistan regardless of conditions on the ground, something made more feasible by the installation of White House loyalists in senior defense posts.

This includes the installation of retired Army Col. Douglas Macgregor, an ardent opponent of the US military's presence in Afghanistan, who once called for the use of lethal force against illegal immigrants and has made a litany of racist comments, as a senior adviser at the Pentagon.

A Pentagon spokesman confirmed last week that Macgregor "will be serving as a Senior Advisor to the Acting Secretary of Defense. Mr. MacGregor's decades of military experience will be used to assist in the continued implementation of the President's national security priorities."

Macgregor has been a vocal opponent of the US military's mission in Afghanistan and has called for a total withdrawal of US troops and the American Embassy despite the continued presence of terrorist groups there.