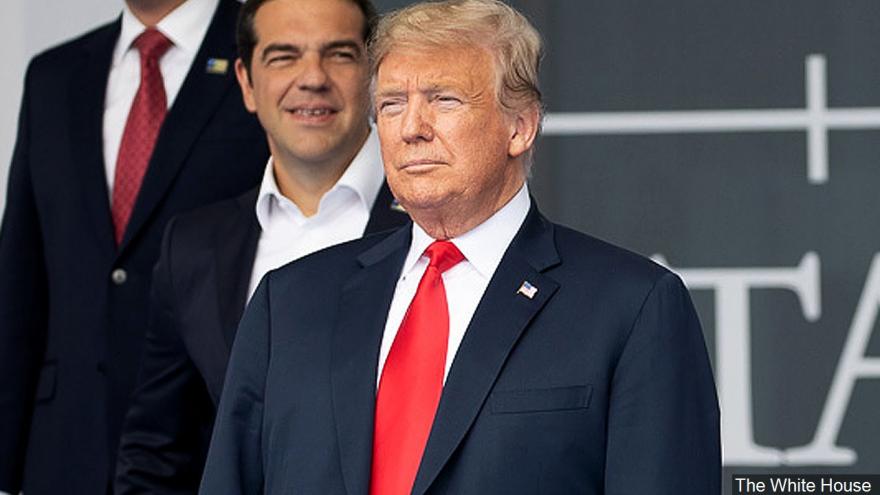 Speaking before Trump and Putting were due to meet in Helsinki, European Council President Donald Tusk appealed for governments to avoid wrecking a political and economic order that led to a peaceful Europe and developing China.

Tusk spoke at a news conference with China's No. 2 leader, Premier Li Keqiang, following an annual EU-Chinese economic summit also attended by the president of the European Commission, Jean-Claude Juncker. They met amid mounting acrimony over Trump's tariff hikes on goods from China, Europe and other trading partners.

"It is the common duty of Europe and China, America and Russia, not to destroy this order but to improve it, not to start trade wars which turn into hot conflict so often in our history," said Tusk, a former Polish prime minister.

Tusk appealed to governments to "brave and responsibly" reform the World Trade Organization, the global trade regulator, by updating its rules to address technology policy and state-owned industries — areas in which Beijing has conflicts with its trading partners. Trump has criticized the WTO as outdated and has gone outside the body to impose import controls, prompting warnings he was undermining the global system.

"There is still time to prevent conflict and chaos," said Tusk. "Today, we are facing a dilemma — whether to play a tough game such as tariff wars and conflict in places like Ukraine and Syria, or to look for common solutions based on fair rules."

Last week, Tusk lambasted Trump's criticism of European allies and urged him to remember who his friends are when he met Putin.

Other governments have criticized Trump for going outside the WTO when he imposed 25 percent tariffs on $34 billion of Chinese goods. That was in response to complaints Beijing is hurting American companies by stealing or pressuring enterprises to hand over technology.

Trump strained relations with allies by imposing tariff hikes on steel and aluminum from Canada, Mexico and the European Union. The 28-country European trade bloc responded with import taxes on $3.25 billion of U.S. goods.

Li, the premier, said China and the EU agreed to take steps to "safeguard free trade" and the global multilateral regulatory system.

"Given the complicated and fluid international landscape, it is important for China and the EU to uphold multilateralism," said Li.

Beijing has tried, so far without success, to recruit European support in its dispute with Washington. European leaders have criticized Trump's tactics but share U.S. criticism of China's industrial policy and market barriers.

Asked whether China used Monday's meeting to try to form an alliance with the EU against Washington, Li said the dispute was a bilateral matter for Beijing and the United States to solve.

"Our summit is not directed at any third party," said Li.

The EU and China announced plans June 25 to form a group to work on updating WTO rules.

They gave no time line and private sector analysts expressed skepticism Beijing would agree to rules that might hamper its plans to develop Chinese champions in technology and other industries.

Li has appealed to visiting European leaders including German Chancellor Angela Merkel in May by saying their companies were welcome to invest.

"We see a China that is seeking alliances as countermeasures to the U.S. actions," the president of the European Union Chamber of Commerce in China, Mats Harborn, said last week.

A European Union report last month said Beijing imposed more new import and investment barriers in 2017 than any other government. The 28-nation EU is China's second-biggest trading partner after the United States.

The EU cited rising obstacles in China's semiconductor, cybersecurity and other industries.

"Protectionism is on the rise," it said. "China was identified as the partner contributing the most to this trend."

Li has tried appeal to visiting European leaders including German Chancellor Angela Merkel in May by saying their companies were welcome to invest.

The premier gave no indication whether Beijing would act on complaints European companies are blocked from acquiring most Chinese assets while its companies operate freely abroad.

During a visit to Berlin by Li this month, German and Chinese companies signed deals worth 20 billion euros ($24 billion).