Evacuation flights out of Kabul are picking up. Here's what it's like at the airport. 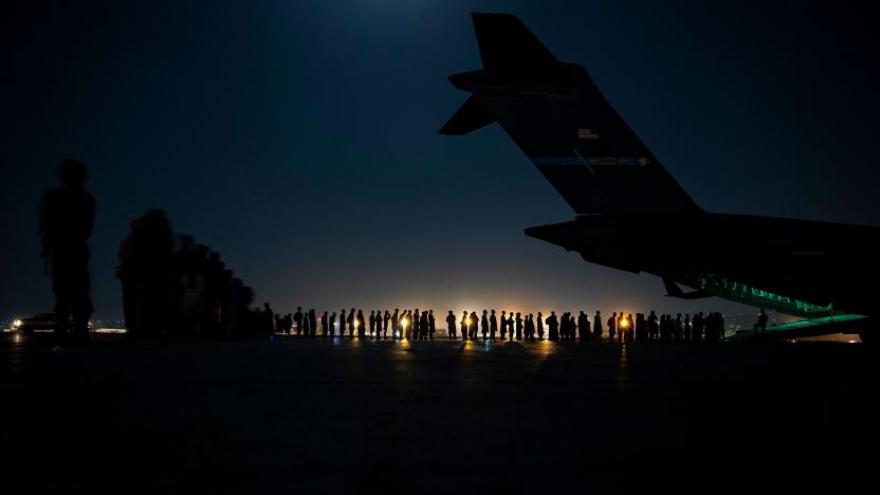 The White House said Wednesday morning that approximately 19,000 people had been evacuated by US military and coalition flights over the past 24 hours. The Pentagon said Tuesday that there are "a little bit above 5,000" people at the airport in Kabul waiting to board flights, which are now leaving about every 45 minutes.

Additionally, two defense officials told CNN on Tuesday that the first US troops have started leaving the country as the evacuation effort enters its final week.

That's an improvement on all fronts, but the US is still up against the clock. President Joe Biden will stick, for now, with the August 31 deadline to withdraw US troops, according to a senior administration official.

For help understanding the situation on the ground, the What Matters newsletter turned to CNN Senior International Correspondent Sam Kiley, who is at Kabul's Hamid Karzai International Airport while the evacuation efforts unfold.

Our conversation, conducted over the phone and lightly edited for flow, is below.

What Matters: You got into Afghanistan on Sunday. What was your impression when you first got on the ground?

SK: We arrived midafternoon on a Qatari flight and I was pleased and relieved to see quite large, well-ordered queues of people already being loaded onto aircraft from around the world.

So the kind of awful scenes that Clarissa (Ward) had witnessed on her way out in the very early stages of the evacuation were not being repeated by the time I got in. But there were very large numbers and there were also, of course, very large numbers of people pressed up against the walls outside, and indeed on that day -- although we didn't know it at the time, exactly -- but on that day, seven people were killed in crushes against the walls. A lot of them close to the British military camp.

What Matters: The US evacuation effort has obviously ramped up in recent days. Are you seeing planes constantly coming in and out of the Kabul airport?

SK: Yeah. So there is a constant circulation of aircraft, mostly big cargo lifts, C-17s and these propeller planes or kind of NATO aircraft. There's a small number of civilian aircraft. I've seen Kam Air, which is an Afghan airline that took several hundred people off. I watched that takeoff this afternoon. So there most certainly has been a very significant increase, and that's borne out by the statistics, which show -- according to the United States -- that 21,000 were evacuated over a 24-hour period. That's both US and coalition evacuees. Americans evacuated about 12,000 of them.

Today, by lunchtime the Americans had evacuated about 9,000. The numbers of people waiting to be evacuated, seem to be sitting between 4 and 5,000 as small numbers of people are now able to get in. But everything is much, much more slickly organized, and there's no great surprise -- people should get better at what they do. And nobody's had any practice in this kind of an operation, so that it was chaotic to begin with and now is pretty slick is no great surprise.

It doesn't solve many of the problems outside of the gate, but it does mean that you don't get the massive bottlenecks that we saw at the beginning.

What Matters: The people you're seeing who are actually reaching the airfield, are they relieved? Are they just anxious for the flight to actually take off? What's their state of mind?

SK: It's very clear almost every person is very, very badly torn by the need to get out and save themselves and their families, in their view, and their friends and families in the country that they're leaving behind.

I spoke to, on the day I arrived, a fellow journalist who had to get out in 2016 because he'd been threatened by the Taliban but was able to come back and work in Kabul with a bit of a lower profile. He felt he had to get out. He said that he was heartbroken and actually it was a very, very moving encounter. I don't often -- I try to control myself on air because I'm a professional. But there was something about a member of my tribe being heartbroken and being sort of -- it was a real kind of emotional gut punch to see the look in his eyes when he was leaving.

And that is a look that I've seen in the eyes of lots of people. And just today, I spoke to a young woman, mostly through a translator, who was getting out but who had got separated from her brother, who was also hoping to get out but he'd got stuck on the wrong side of the gate. And she was moments away from getting on an aircraft and didn't appear to know where she was going to end up. And she had with her her two younger sisters, one of whom was probably about 9.

And she was in tears over the fact that she was going to leave her brother behind, but went ahead with the evacuation because she felt she had no choice.

What Matters: Do the people that you've talked to have an idea where they're going or is the focus on just getting out of Afghanistan?

SK: Well, the focus for people getting out is to get out. But they, by and large, they have the paperwork to get out because of their association with one or other of the coalition partners. If you've got an American visa you know that you're going to end up in America. If you've got a visa for Holland, that's where you'll go. So those are the ones who have the very close association, probably military and diplomatic and intelligence and so on.

Then you have the people who are sort of vulnerable because they're journalists or artists or activists or members of the intelligentsia who fear that the Taliban life will be dangerous for them. Qatar has put a lot of effort into bringing them to Qatar. Where they then go on to, they're not always aware. They often express a preference for Europe, Canada, the United States.

And I think that will be quite a challenge for different countries to step up to the mark, particularly those countries that invested in this 20-year war, to figure out where their moral and social responsibilities lie in looking after these people who were encouraged to buy into the idea of a modernizing Afghan state rather than a medieval one.

What Matters: Finally, since arriving on Sunday, what has surprised you the most?

SK: Well, it's pretty difficult to surprise me. I've been doing this job 30 years. In all honesty, I think what has personally been -- I've been surprised by how very moved I've been and very sad.

I first came to Afghanistan just before the battle for Tora Bora, when al Qaeda was driven out. And now I'm watching the coalition being driven out and replaced by the Taliban and the heartbreak of people's -- the shattering of people's hopes over the last 20 years and the kind of fear they have for their future is very difficult to witness.

On a practical level, it is an extraordinary thing to witness, an airlift -- an emergency air evacuation, which is the second biggest the world has ever seen -- second to the Indian evacuation of their citizens from Kuwait after Saddam Hussein invaded there. The numbers are astronomical.

The other really striking thing has been the extreme loyalty that a lot of these people, not only in the military, but intelligence and in diplomacy and so on, feel toward their friends and colleagues with whom they worked inside Afghanistan. There are lots of people working very, very hard behind the scenes both overtly and covertly to get their former colleagues and friends out. And that has been heartening, actually.

It's also been quite moving because it means that these were genuine relationships and friendships that even though the nations that were in the coalition are now abandoning Afghanistan, the human bonds that exist between the peoples in those nations remain very strong.