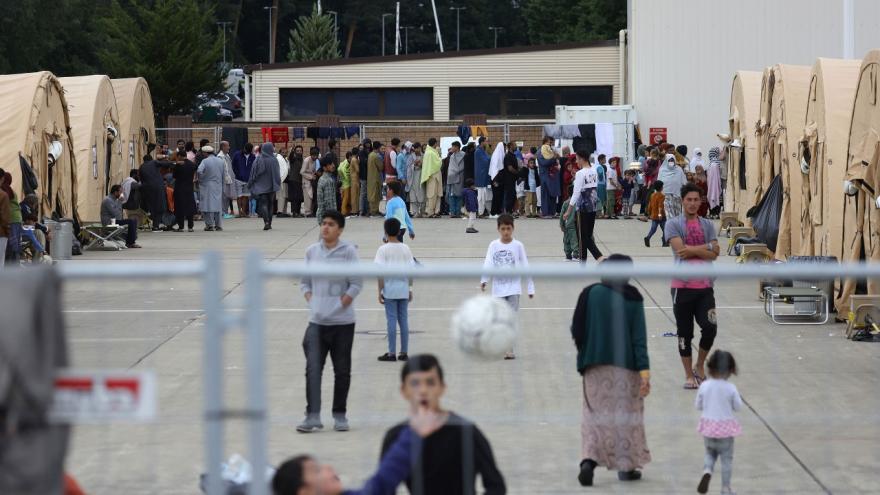 Evacuees from Afghanistan are seen at a temporary emergency shelter at the Ramstein Air Base on August 26, in Ramstein-Miesenbach, Germany. Photo courtesy: Andreas Rentz/Getty Images

(CNN) -- The United States still plans to end its mission in Afghanistan this month, the Pentagon said Friday, as the evacuation of US citizens and allies enters its final, desperate stage after a bombing at Kabul's airport killed at least 170 people including 13 US service members.

Far fewer people were at the airport Friday, and a source directly familiar with the Kabul airport operations told CNN the remaining focus is to get people with special, last-minute access requests to the airport. But the source cautioned that officials were "unsure how many they can get in with so much Taliban coordination required."

More than 200 people were injured in Thursday's attack, an official with Afghanistan's Ministry of Health told CNN on Friday. The UK government said Friday that two British adults and the child of another British national were among those killed in the attack.

The Pentagon said Friday the US was "still planning on ending this mission at the end of the month."

"As we get closer and we are getting closer, you're going see us begin to make those muscle movements to pull out our troops and some of our equipment, as appropriate with any retrograde," Pentagon spokesperson John Kirby said at a a briefing, adding they want to "preserve as much capability for as long as we can, both in terms of the security footprint" and ability to evacuate people.

The Pentagon clarified there was only one explosion at the Abbey gate at Hamid Karzai International airport on Thursday, after originally saying there was a second explosion outside the Baron hotel in their initial statements.

"There was a river of blood ... if you wanted to make a few steps you had to first check to see if there were any dead bodies under your feet to move," one eyewitness, Muhammad, told CNN.

Muhammad, who said he assisted US forces and worked with NATO in Afghanistan, was at the airport with his family Thursday trying to speak with American troops and find a flight out of the country. He did not provide his last name for security reasons.

"I covered my daughter's eyes so she wouldn't see the situation, because it was a very bad situation. After that, I took my family out and went on our way to go home," he said.

Few people were gathering at Kabul airport on Friday, a journalist working with CNN reported.

People were not allowed to go to the main gate of the airport, the journalist said. Almost 500 yards before the main gate, the road was blocked by the Taliban with parked cars, they added.

The rest of the city was "calm," with traffic at lower levels than on previous days. All the main commercial centers were either closed or their business was very slow, the journalist reported. This is unsurprising because Friday marks the start of Afghanistan's weekend.

A different journalist working with CNN said Afghan and foreign forces were deploying flash bangs from inside the perimeter of the airport in an attempt to prevent people from gathering outside the airport on Friday morning.

Despite the numerous attempts to disperse crowds, many people were still trying to get to the airport with the hopes of being evacuated.

Besides the 13 US service members who were killed, 18 others were injured in the attack, the Pentagon said.

Eleven Marines were among the troops killed and several more were wounded, Marine spokesman Maj. Jim Stenger said. The identities and units of those killed won't be announced until after relatives are notified, he added.

The US service members wounded in Thursday's attack in Kabul have landed at Ramstein Air Base in Germany and have been transferred to Landstuhl Regional Medical Center for treatment, Joint Staff deputy director for regional operations Army Maj. Gen. William "Hank" Taylor said Friday.

President Joe Biden plans to contact the families of the US service members who were killed in Thursday's attack, according to a senior official, who added that the White House is first working to ensure that next of kin notifications have taken place.

The attack came as the US and other Western countries were racing to evacuate their citizens and Afghan allies ahead of an August 31 deadline, after the Taliban retook control of the country.

Thousands of Afghans had been gathering at the airport's gates in recent days in hopes of being evacuated. Footage posted to social media on Thursday after the explosion showed chaotic scenes of crowds trying to help the wounded amid bodies on the ground. Photos showed bloodied people being transported away from the scene in wheelbarrows.

ISIS in Khorasan, known as ISIS-K, has claimed responsibility for the attack but provided no evidence to support the claim. US officials have said the group was likely behind the atrocity.

Speaking from the White House, Biden said evacuation efforts would not be stopped by the attack, and that he had ordered US military commanders to develop plans to strike "ISIS-K assets, leadership and facilities."

That brings the total number of people evacuated via US military and coalition flights to 105,000 since August 14, and 110,600 since late July, according to the White House.

The Pentagon announced Friday that additional military bases in the US -- Marine Corps Base Quantico, Virginia, Fort Pickett, Virginia, and Holloman Air Force Base, New Mexico -- will be used to help support evacuation operations from Afghanistan.

Gen. Kenneth "Frank" McKenzie, head of US Central Command, said US troops were continuing the evacuation mission at "best speed," noting there were still about 1,000 American citizens in Afghanistan.

But he said the focus right now was on the "extremely active threat streams against the airfield."

McKenzie described the threats from ISIS as "imminent," raging from rocket attacks to "vehicle-borne" suicide attacks in addition to "walk-in" suicide attackers like the assault on Thursday.

He said the US military is using attack helicopters and other manned and unmanned aircraft to defend the airport in Kabul, as well as sharing some intelligence with the Taliban for security purposes.

"They don't get the full range of information we have. But we give them enough to act in time and space to try to prevent these attacks," said McKenzie.

US officials have been warning over the past week that a threat of a terror attack at the airport was becoming more acute. Earlier on Thursday local time, US diplomats in Kabul warned American citizens to "immediately" leave several gates into the airport, citing security threats.

The risk of potential suicide attacks by ISIS-K had already led the US to establish alternative routes to Kabul airport earlier on in the evacuation operation.

Speaking to CNN's Anderson Cooper, journalist and author Matthieu Aikins said he could hear "shooting and sirens" from the airport less than an hour after the attack.

"At that point, we went back to the emergency hospital, and they were bringing the casualties in there. There was just body after body. It was a really terrible sight," Aikins said. "You have tens of thousands of people cramming in from every angle at the same time, this desperate pressure to get the American citizens and others out. So it was really truly a recipe for disaster."

Tens of thousands of people have so far been evacuated by the US military and NATO allies from the airport in the past two weeks. These evacuations are set to start winding down in the next few days, ahead of the US' August 31 deadline for the final exit from a 20-year war in Afghanistan.

The UK's evacuation operation will was going to end on Friday following the closure of the UK's main processing center, the Baron Hotel, outside Kabul airport, UK Defence Secretary Ben Wallace said Friday.

Wallace told Sky News that following the decision to close the processing center at 4.30 a.m. UK time, the country will now "process" the "1,000 people approximately in the airfield now" but the operation has a "matter of hours" left.

The "sad fact," said Wallace, is that "not every single one will get out."

British Prime Minister Boris Johnson later pledged to "shift heaven and Earth" to help people who are eligible for resettlement and are stranded in Afghanistan after August 31.

"The crucial thing is the Taliban, the new Afghan government however it's composed, has got to understand -- if they want to have engagement with the West, if they want to have a relationship with us, then safe passage for those [people] is absolutely paramount," Johnson said.

Speaking to British media, the prime minister said he felt a "great sense of regret" that they were not able to get everyone out during what he described as the "first phase" of the evacuation process.

More than 18,700 evacuees from Afghanistan have come through US air base Ramstein in Germany so far, according to the airbase's Public Affairs Office, and a huge influx of more than 10,000 evacuees are expected to arrive over the coming hours.

Germany will leave its "MedEvac," a flying intensive care unit, in Tashkent, Uzbekistan, for 24 hours to be able to support American forces if necessary, Germany's Ministry of Defense tweeted Friday. Germany evacuated more than 5,000 people from Afghanistan over the course of its mission, according to a tweet from the German Foreign Office.

France will see its mission to evacuate people from Afghanistan "through to the end" despite Thursday's deadly attack on Kabul's airport, the Élysée said in a statement.

Spain ended its evacuation mission with the last remaining people expected to land at the Torrejon military airbase near Madrid later on Friday, the country's presidency said in a statement, while Italy's evacuation mission in Afghanistan will end Friday, Foreign Minister Luigi Di Maio announced.

Meanwhile, the World Health Organization is trying to establish an air bridge into the city of Mazar-i-Sharif in Northern Afghanistan in the coming days, with the help of Pakistan authorities, it said Friday.

The Taliban have offered Turkey the option of running Kabul airport, and said they will ensure security of the premises. However, Turkish President Recep Tayyip Erdogan said he had yet to make a decision.