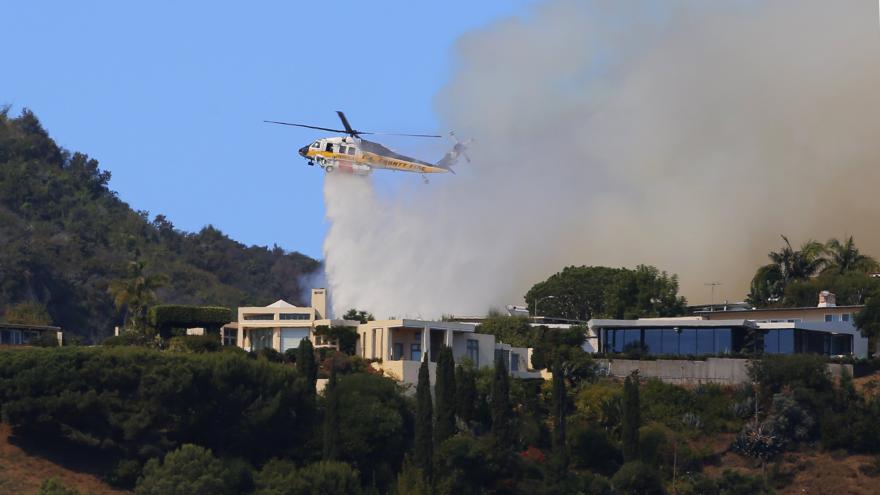 "This is due to both potential fire and smoke behavior" and the pending arrival of large aircraft dropping fire retardant, LAFD said in a news release.

The fire began around 10:30 a.m. PST at the base of Palisades Drive and quickly spread about 18 acres within 15 minutes. It quickly moved uphill and burned more than40 acres of brush. About 200 homes within eight residential blocks were under threat from the flames andhave been heavily impacted by smoke, said LAFD Chief Patrick Butler during a press conference.

There have been two reported injuries, one minor injury to a firefighter and one civilian who was taken to the hospital for respiratory stress, Butler said.

Pacific Palisades is a coastal neighborhood west of downtown Los Angeles. The wealthy area is home to many celebrities, including Reese Witherspoon, whose home was recently featured in an issue of Vogue. Director J.J. Abrams bought a home there in 2017 for $6.2 million, according to the Los Angeles Times.

Firefighters were clawing their way up the hillside

More than 150 personnel from the LAFD were battling the fire. Six hand crews from the Los Angeles County Fire Department were assisting the LAFD and plan to be in Palisades all night, Butler said. Fifty LA police personnel were on scene helping residents shelter in place, police officials said.

"Right now, the conditions are favorable for fighting this fire," said Capt. Branden Silverman of the LAFD. "We have on-shore winds that are coming off the coast and keeping the Santa Ana winds from pushing this fire hard."

The fire is not threatening Los Angeles County residents and there is no reason to evacuate the county, County Fire Chief Anthony Marrone said.

Helicopters were seen releasing numerous and precise water drops and fire retardants on the flames. Firefighters along an extremely steep ridge below multimillion-dollar homes were using hoses and cutting paths to stop the fire's progress.

"This is an extremely challenging fire for hand crews," Butler said. "If you look at the firefighters, they're essentially clawing up this hillside with rocks coming down on them."

While the fire is contained within a perimeter, Butler said the biggest concern for firefighters right now is the fire getting out of the containment area.

'You can't predict what Mother Nature is going to do'

Charlie Lyons said he was hiking Monday morning when he noticed the plumes of smoke.

"You go into denial immediately, saying, 'I hope it's not what I think it is,'" he said, adding that this was the second time in three weeks he's seen fire in the hills of Palisades. "We're in a terrible cycle right now."

His daughter, also named Charlie, told CNN she feared for the worst.

"I immediately started packing my stuff, my valuables," said Charlie Lyons, 22. "My friend last year lost her house in Malibu. You can't predict what Mother Nature is going to do."

Fire officials say this is a terrain-driven fire, not wind-driven.