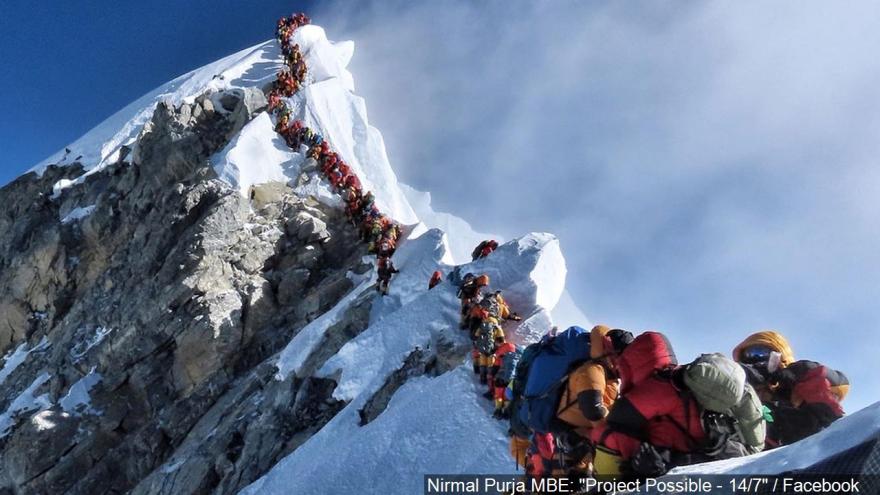 (CNN) -- Two mountaineers have died on Mount Everest after crowds of people became stuck in a queue leading to the summit of the world's highest mountain.

Indian climber Anjali Kulkarni, 55, died on her way back from climbing to the summit of Mount Everest on Wednesday, her son Shantanu Kulkarni told CNN. She had become stuck in the "traffic jam" above camp four, which, at 8,000 meters (26,247 feet), is the final camp before the summit.

Climber Nirmal Purja posted a picture on Instagram of the heavy human traffic on the mountain Wednesday, showing a dense trail of climbers huddling on an exposed ridge to the summit. He added that there were roughly 320 people in the queue to the top of the mountainin an area known as the "death zone."

Danduraj Ghimire, director general of Nepal's Tourism Department, rejected suggestions that the jam of climbers contributed to the deaths, calling such claims "baseless."

The summit of Mount Everest has an elevation of 8,848 meters (29,029 feet). At that level, each breath contains only one-third of the oxygen found at sea level. The human body is also rapidly deteriorating at that altitude, meaning most people can spend only a matter of minutes at the top,without extra oxygen supplies, before it becomes intolerable.

"The weather has not been very great this climbing season, so when there is a small window when the weather clears up, climbers make the move," Ghimire said. "On May 22, after several days of bad weather, there was a small window of clear weather, when more than 200 mountaineers ascended Everest. The main cause of deaths on Everest has been high altitude sickness which is what happened with most of the climbers who lost their lives this season as well."

According to Shantanu Kulkarni, his mother had trekked for over 25 years and had trained to climb Mount Everest for the past six. She had completed a number of major treks, including Mount Elbrus in southern Russia and Mount Kilimanjaro in Tanzania, and was also an avid marathoner.

Anjali Kulkarni had owned an advertising agency with her husband, but they both retired to "pursue their dream of standing atop Mount Everest," Shantanu said.

Cash, a grandfather from Utah, collapsed near a portion of the trail which had an altitude of about 8,770 meters (28,700 feet), according to Pioneer Adventure.

"Our team did their best to save his life," the company noted, adding that Sherpa guides had attempted to keep him alive while pulling him down the mountain. "Despite their best efforts in providing the best guidance, sufficient oxygen supplies and medical support they could not save his life."

His children told CNN affiliate KSL-TV that he had died after achieving his goal of summiting the highest mountain on every continent.

"The last message he sent to me, he said 'I feel so blessed to be on the mountain that I read about for the last 40 years,'" his son Tanner Cash told KSL. His body will likely remain on Everest.