Everything you need to know about Shark Week 2020 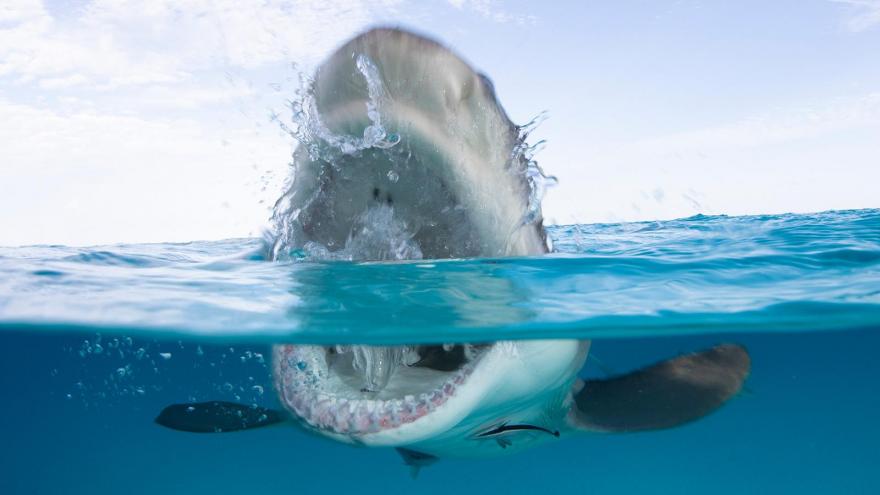 Over/under shot of a lemon shark exposing its teeth at the surface.

(CNN) -- We hope you're not afraid of sharks, because the annual week of shark obsession has arrived.

With more than 20 hours of shark programming this week, here's a sample of what you can sink your teeth into:

"Air Jaws: Ultimate Breach Off" (8 p.m. ET): Using decoys, drones and underwater cameras, three researchers will return to one of the last hunting grounds for Air Jaws to "count the number of breaches and collect data" on hunting techniques to learn more about how the shark population is rebounding.

"Tyson vs. Jaws: Rumble on the Reef (9 p.m. ET): The legendary boxer will go head-to-head with one of the ocean's top predators, including the black tip reef shark. Famed ring announcer Michael Buffer will call the shots.

"Abandoned Waters (FKA Sharks of Neptune)" (8 p.m. ET): Because of coronavirus pandemic, a lack of human interaction has allowed some of the biggest great white sharks to return to their natural behaviors. Shark researchers now have the opportunity to study great whites up close and personal at Australia's Neptune Islands.

"ShaqAttack" (9 p.m. ET): After Shaquille O'Neal's shark encounter during Shaq Does Shark Week in 2019, he is back with YouTube stars Dude Perfect and Mark Rober to test and uncover various sharks' "most mind-blowing hunting techniques."

"Will Smith: Off The Deep End" (9 p.m. ET): Will Smith dives into shark infested waters to confront his fear of open waters -- and sharks.

"Monster Under the Bridge" (8 p.m. ET): Scientists believes that an 18-foot-long, one-ton great hammerhead named Big Moe lives under the Old Seven Mile Bridge. Find out if it's true.

"Adam Devine's Secret Shark Lair" (9 p.m. ET): Last year, Adam Devine and a team of marine biologists discovered a secret tiger shark lair, which may be the largest congregation of tiger sharks on the planet. Devine, Anders Holm and Blake Anderson learn about what makes this "tiger shark party" so unique.

"Sharkadelic Summer" (9 p.m. ET): Snoop Dogg learns more about why Great White Sharks are living along America's shores. In this episode, Snoop will revisit some of the craziest shark encounters caught on camera and meet experts studying the secrets behind the "great white shark invasion."

"Mako Nation" (10 p.m. ET): Shark expert Riley Elliot and underwater cameraman Andy Casagrande take on a mission to uncover the mysteries behind the mako shark in one of the remaining places in the world where they rule the waters.

"Lair of the Great White" (9 p.m. ET): A team of experts venture into underwater caves to uncover why a population of great whites off the coast of Western Australia is so much more aggressive than others.

"Tiger Shark King" (10 p.m. ET): A deepsea camera captures a 14-foot tiger shark being attacked by a large, unseen beast who might be an unknown species of mega-shark or a cannibalistic tiger shark.

"I Was Prey Shark Week 2" (11 p.m. ET): Two adventure seekers share their shark attack stories. A spearfishing expeditions "turns into a nightmare" after a bull shark and great white shark attack a paddle boarder on Ascension Island off the coast of Australia.

"Sharks of Ghost Island " (8 p.m. ET): Dr. Craig O'Connell and a team of experts return to Ghost Island, located on the edge of the Bermuda Triangle, to find out why the island attracts so many sharks.

"Wicked Sharks" (9 p.m. ET): Shark expert Dr. Greg Skomal uses cutting edge technology to capture the great white shark's point of view to uncover how and where they hunt to help protect people during the summer.

"I Was Prey: Terrors from the Deep" (11 p.m. ET): Four survivors share stories about how they came face-to-face with sharks and lived.

"Naked and Afraid of Sharks 2" (8 p.m. ST): Five Naked and Afraid veterans -- Matt Wright, Jeff Zausch, Serena and Amber Shine, and Alex Manard -- try to survive on a remote strip of islands surrounded by shark infested water known by locals as "shark alley." With limited resources and difficult conditions on land, they will have to compete with sharks for the same food.