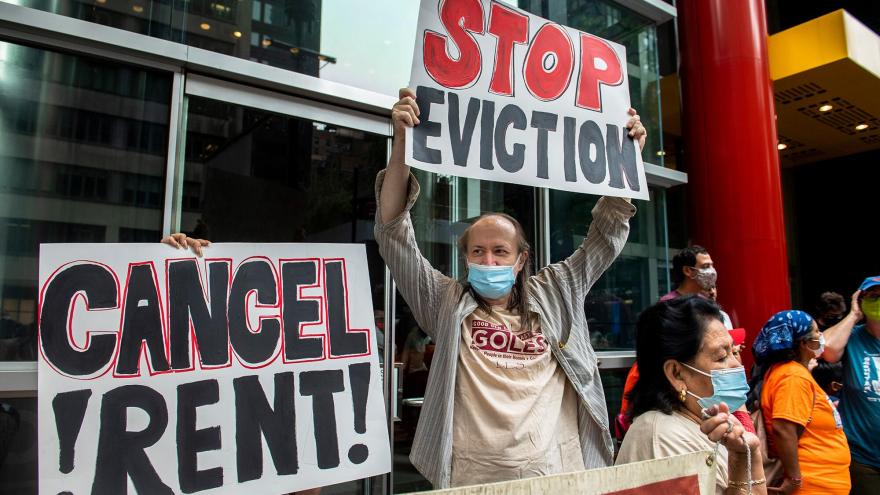 (CNN) -- Justice Department lawyers defended the Biden administration's most recent eviction moratorium Friday, telling a federal judge that because of the "deteriorating public health situation" related to the Delta variant, the US Centers for Disease Control and Prevention determined that it needed "a new invocation" of its responsibility "to protect public health."

In court papers, the Justice Department said the new moratorium -- designed to bar landlords from evicting certain tenants amidst the pandemic -- is "more targeted" than the version that expired on July 31.

DOJ also said that consideration of the new moratorium should not follow "predictions about what the Supreme Court may decide."

"Factual circumstances have changed," acting Assistant Attorney General Brian Boynton told the court. The new order "differs from the prior eviction moratorium by targeting only areas of high or substantial transmission."

In the scramble to avoid a rash of evictions, President Joe Biden admitted during a news conference earlier this week that he wasn't sure if the new effort would pass legal muster, but, he said, he was seeking to buy time in the courts to help those who are behind in their rent.

The moratorium applies to areas of the country with high or substantial transmission of Covid-19 and is set to last until October 3. It still covers 80% of US counties and 90% of the US population.

RELATED: What the Supreme Court and lower courts have (and have not) said about the eviction moratorium

In May, Friedrich held that the CDC had exceeded its authority in allowing the previous moratorium, but she agreed to put her ruling on hold pending appeal. An appeals court allowed the moratorium to remain in place, as did a divided 5-4 Supreme Court at the end of June.

But critically, Kavanaugh, serving as the swing vote, said he thought after the moratorium expired on July 31, "clear and specific congressional authorization (via new legislation) would be necessary for the CDC to extend the moratorium."

His vote signaled that there may now be a majority on the court unwilling to sign off on a moratorium without congressional action.

As Biden announced the new moratorium, the landlords went back to the district court. They said that in "substance and effect" the new moratorium amounted to an extension of the "same unlawful ban on evictions that has been in effect since September 2020." The lawyers charged that the CDC acted in "bad faith" to relieve political pressure on the White House and used litigation delays to buy more time to keep the "unlawful order in place."

"Justice Kavanaugh's controlling opinion made clear that the CDC could not extend the moratorium beyond July 31 absent new legislation," said Brett Shumate, a Jones Day lawyer representing the landlords.

But the government told Friedrich on Friday that she should not block the current moratorium based on Kavanaugh's vote because the justices have not yet had the chance to review the new action and the impact of the Delta variant.

Boynton said the "trajectory of the pandemic has changed dramatically" with a seven-day average of daily new cases now at 89,976 a "nearly seven-fold increase over the rate when the Supreme Court acted on June 29.

DOJ added: "A Supreme Court 'order' or 'ruling' in Plaintiffs' favor cannot be created by cobbling together the votes of dissenting Justices with a concurrence."

This story has been updated with additional detail.