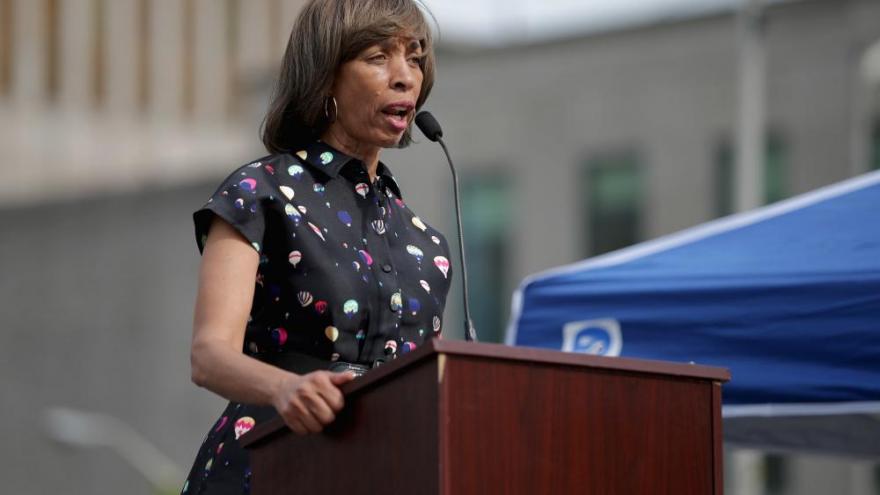 Catherine Pugh, who served as Baltimore mayor between 2016 and 2019, resigned last May.

(CNN) -- Catherine Pugh, the former Baltimore mayor whose tenure was cut short by a children's book deal scandal, was sentenced Thursday to three years in prison and three years of parole for corruption charges stemming from her role in the scheme.

The government had called for Pugh to be sentenced to 57 months -- nearly five years -- in prison earlier this month.

Pugh was also ordered by US District Judge Deborah K. Chasanow to pay $411,948 in restitution and to forfeit more than $600,000, including a property in Baltimore and nearly $18,000 from her campaign account.

Pugh's transgressions dating back several years emerged during the months-long scandal over her self-published "Healthy Holly" books, which prosecutors said she fraudulently sold to local nonprofit organizations in order to obtain more than $800,000 to fund her campaign and enrich herself.

"This morning was a sad occasion," Robert Hur, the US Attorney for the District of Maryland, said to reporters following the sentencing.

"Holding public office is a rare privilege and an opportunity to serve the community and get things done that help our community. And unfortunately, the type of fraud and public corruption that Ms. Pugh committed -- and was sentenced to three years in federal prison for today -- undermines everyone's faith in government and what government can do for the people," he said.

In a video address submitted to the court on Wednesday, Pugh, who resigned last May, apologized "to the citizens, to young people, to my partners, my friends, everyone I've offended, everyone I've hurt and the city's image."

"When I think about me, and my capacity and my capabilities and all the things I've been able to do I said, 'How do you end up here? I mean, how do you mess this up?'" she said. "I messed up. I really messed up. I am so sorry. I really am sorry."

The original 11-count indictment against Pugh alleged that she and her long-standing legislative and campaign adviser, Gary Brown, solicited nonprofit organizations and foundations -- chief among them, the University of Maryland Medical Center -- to buy her books, which promote healthy living among children.

But prosecutors said that in some cases, the books were never delivered, while in others, the pair delivered the books and then converted them to their own use without the buyers' knowledge, or double-sold books, profiting from the purchases.

Federal authorities executed search warrants last year at several locations tied to Pugh, including her home, as part of their investigation into whether she improperly profited from the deal while serving on the hospital's board.

This story has been updated with additional information about the sentencing and charges against Pugh.