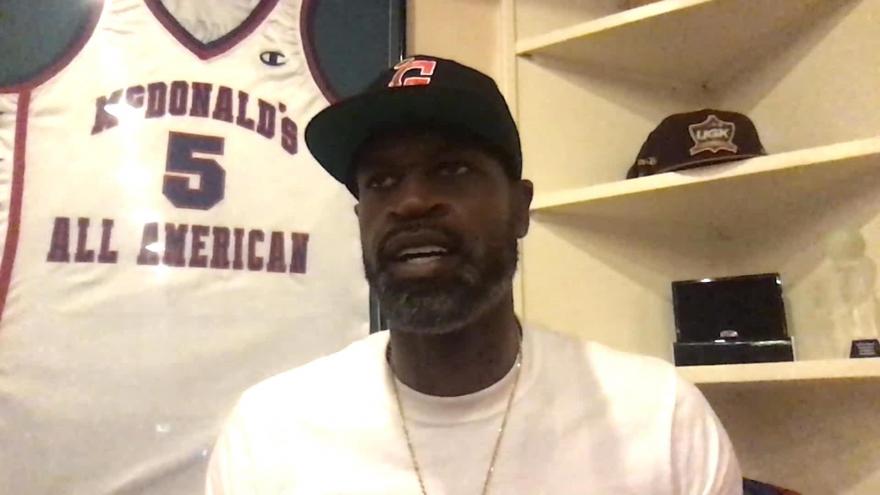 "I could've changed my words, but it's nothing I said that I support any of that," he told CNN on Wednesday. "I could've switched up, but that's the end of it. I know I love everybody and that's how I always stand, and I'm not going to let anybody demean my character."

He has spoken to his Jewish friends, he said, and they know he wasn't trying to defend Adolf Hitler or the despot's ideals. He was merely pointing to what he felt were inequities between the Philadelphia Eagles' treatment of DeSean Jackson and their handling of a white wide receiver who uttered a slur seven years ago.

"That's the end of it. They can twist it how they want, but that's exactly what it is. I don't hate nobody," he said.

Stephen Jackson, 42, who also works as a basketball analyst, was a friend of George Floyd and became a fixture of Black Lives Matter protests after his pal was killed by Minneapolis police.

He stepped forward to become a voice for Floyd and Floyd's daughter, Gianna, and applauded the demonstrations and embraced his role as a leader and adviser in the movement to secure justice for Floyd's family.

"(Floyd) would love everybody screaming his name and away in Iran and the Netherlands and all that stuff. He appreciates all of that," he said in a June interview with CNN.

Bleacher Report columnist Mike Freeman believes Stephen Jackson, with his latest remarks, may have extinguished all the goodwill he garnered during the BLM protests, he said.

"He said some really passionate, smart things and was a really good almost spokesperson for what's happening," Freeman told CNN, "and now I think this destroys it all. It obliterates it all."

Following backlash to posts in which DeSean Jackson misattributed an anti-Semitic trope to Hitler and said that Jewish people planned to "extort America" and achieve "world domination," the 33-year-old apologized.

In his apology post, the Philadelphia Eagles wide receiver said he will "fully educate" himself and work with local and national organizations to "be more informed and make a difference in our community."

New England Patriots wide receiver Julian Edelman, who is Jewish, acknowledged his NFL counterpart said "ugly things" but stated he saw "an opportunity to have a conversation" with DeSean Jackson. The Eagles wide receiver has already accepted an invitation from Chairman David Adelman of the Horwitz-Wasserman Holocaust Memorial Plaza to tour the Philadelphia plaza and attend an educational session, Adelman wrote.

Later, he sent out an Instagram post saying, "Your races pain doesn't hurt more than the next races pain. Don't act like your hardships or more devastating then ours. And u wonder why we fighting for equality. Common sense ain't common. Truth Hurts. Never waste time explaining to people who never supported u anyway. Free Game."

Pressed on why he appeared to defend DeSean Jackson after the latter apologized, Stephen Jackson said his words were more related to the Eagles' treatment of DeSean Jackson, in juxtaposition to how the team responded to the now-retired Riley Cooper using the n-word in 2013. Cooper is white.

"Maybe I could've been more clear of what I thought DeSean was correct about, but I didn't feel the need to go into a conversation that me and him had about how they were treating him and Riley Cooper. I could've just changed those words," the 14-year NBA veteran said.

In 2013, Cooper was caught on camera threatening to "fight every n***er here" after being denied backstage access to a concert. The Eagles fined him, saying the organization was "shocked and appalled," and Cooper's behavior and attitude had no place in society.

The Eagles on Tuesday issued a similar statement about DeSean Jackson's remarks, using some of the same words, and said they were having conversations with their wide receiver and other personnel. The team is also weighing what actions to take, the statement said.

"We are disappointed and we reiterated to DeSean the importance of not only apologizing, but also using his platform to take action to promote unity, quality and respect," the Eagles tweeted.

Asked again why he would co-sign something DeSean Jackson had retracted, Stephen Jackson replied, "Nice try. I've been out here fighting for justice, for equality, and I was speaking on equality -- why they wasn't handling Cooper and DeSean Jackson any other way.

He'll continue that fight, he said, "and that's just the end of it."

Stephen Jackson further said nobody would be able to find video of him saying he hated anyone. Presented with a separate instance on Instagram in which he appeared to employ during a live conversation another Jewish trope -- alleging the prominent Rothschild family controlled the banks -- Stephen Jackson again touted his love for everyone.

Family patriarch Mayer Amschel Rothschild is credited as the progenitor of the modern financial system, and his family is often the target of anti-Semitic tropes and conspiracy theories.

Stephen Jackson concluded his CNN interview, saying, "I apologize for my words and I could've switched up, but that's the end of it. ... I'm not standing up here apologizing for a job. I don't work for nobody. I'm apologizing because what I stand for is love for all who have love for all, and I mean that -- and that's where I draw the line."

Pittsburgh Steelers offensive lineman Zach Banner has urged his fellow people of color to remember they need to "put our arms" around the Jewish community as much as they do each other, and Stephen Jackson said he concurred.

"I definitely agree. I just want that same energy when we're getting killed in the street," he said.

Stephen Jackson played for eight teams during his career, snaring a ring with the San Antonio Spurs in 2003. The Port Arthur, Texas, native was a forward and guard who could score, rebound and assist. His hard edge and leadership skills earned him the nickname, Captain Jack.