Exclusive: 'I don't think anybody was ready for this Covid,' says head of federal prisons 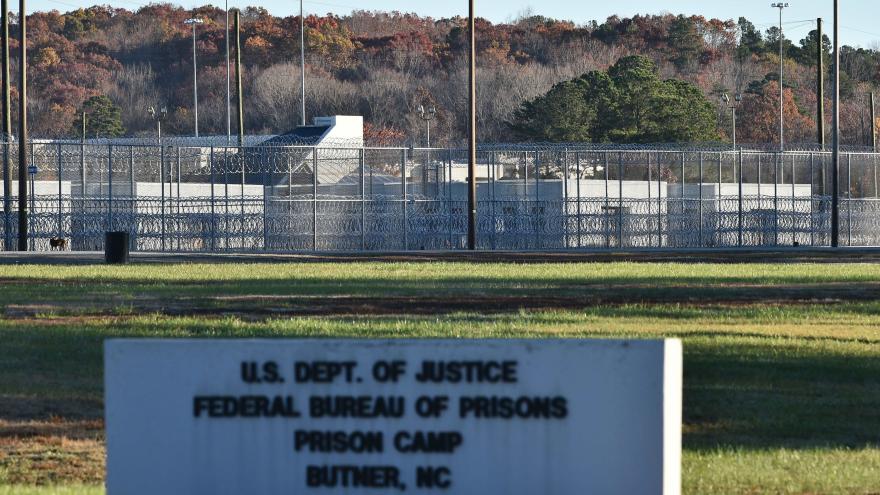 (CNN) -- Coronavirus has swept through the federal prison system in the past three weeks, leaving more than 300 confirmed cases among inmates, at least nine prisoners dead and raising concerns about the government's handling of the crisis.

Inside some facilities, inmates have said they are locked in crammed and cramped cells without face masks and enough soap, and guards have grown concerned that they could be spreading the disease to their families. At a prison in Butner, North Carolina, the number of cases jumped by dozens -- nearly 400% -- earlier this week. And in Oakdale, Louisiana, where six inmates have died in recent days, armed corrections officers had to quell a small uprising with pepper spray on Wednesday, an official at the prison said.

While the reported number of sickened inmates represents less than half a percent of the total federal prison system, the rapid spread of the virus behind the walls of the Bureau of Prison's 122 facilities has mirrored the outside world, and new clusters of the pandemic have emerged at prisons across the country with alarming speed. Inmates, officers and civil liberties advocates say it paints a picture of a system that moved too slowly and continues to leave people behind bars in unhygienic conditions without enough protective equipment.

In his first interview since the pandemic began, Bureau of Prisons Director Michael Carvajal defended the steps his agency has taken amid what he described as the most challenging situation the federal prison system has been confronted with in decades.

"I don't think anybody was ready for this Covid, so we're dealing with it just as well as anybody else and I'd be proud to say we're doing pretty good," said Carvajal, who was named director in late February during the pandemic.

The Bureau of Prisons has taken a wide range of steps since the virus was first detected — shutting down visitations, instituting quarantines for all new inmates, and, last week, moving all of the country's 150,000 federal inmates into near-isolation.

Over the past week, prison officials have also begun to release certain vulnerable inmates early, and handing out face coverings to every inmate and correctional officer that remained.

"It's easy to critique those hot spots, but we don't control that," said Carvajal. "We can only control the people inside of our institutions, and we put things in place to do that."

The Bureau of Prisons began preparing for the potential spread of the virus in January, when early reports of the deadly illness were emerging from China. A task force was established with the system's medical leaders, and prisons were instructed to review pre-existing influenza pandemic plans and begin adjusting them for the budding outbreak. Soon after, said Dr. Jeffrey Allen, the bureau's medical director, they began screening all incoming prisoners and certain staff for symptoms of the illness.

On February 25, Attorney General William Barr, who oversees the federal prison system, moved Carvajal, the 28-year Bureau of Prisons veteran who started off as a prison guard in Texas, into the top job. Two days later, he received his first briefing on the virus.

"It was quite overwhelming, a week or two into this job, knowing that we were going to have to deal with something like this," he said.

On March 13, just after the World Health Organization classified the coronavirus a pandemic, and as President Donald Trump declared a national emergency, the Bureau of Prisons took its most aggressive step, banning all social visitors and most lawyers from all facilities across the country. Carvajal said it is the most serious response since 1995 when the entire federal prison went on a complete lockdown after a series of riots. Prison officials were told to cut down on the transfers of inmates between facilities, and an automatic two-week quarantine was soon after implemented for all new inmates entering a facility.

At the Oakdale, Louisiana, prison, the epicenter of the outbreak in the federal system, the virus may have started to spread as prison workers made routine rounds through different facilities, said Ronald Morris, a longtime maintenance foreman and a local union president.

"The agency was very unprepared when it hit," Morris said. "They could have locked down the institution or put it on a modified scheduling, had a lot more control of movement and everything to keep it more contained if it did kick off, and it wouldn't have gotten all over our institution."

On March 18, the Bureau of Prisons announced it had its first two presumed cases of coronavirus: a staffer at a medium security federal prison in Berlin, New Hampshire, and an employee at a Bureau of Prisons administrative facility in Grand Prairie, Texas.

By then corrections officers were reporting they did not have enough personal protective equipment to shield themselves as they handled inmates. They were also told to return to work within 48 hours of exposure to an inmate with a suspected or confirmed infection, according to an occupational safety lawsuit filed late last month against the Bureau of Prisons by a corrections officer union.

Morris said they still don't have enough protective equipment and at last count, he said Thursday, there were less than 500 specialized masks left for about the same number of workers.

The bureau's steps continue to draw criticism from those who think they should have moved more quickly to protect inmates and staff.

"They claim that they started doing contingency planning in January. It's April and they're now just telling staff to wear gloves and masks and telling staff to provide inmates masks," said Todd Bussert, a criminal defense attorney who's represented a wide variety of federal defendants. "Are they doing everything? I don't know if anybody fully appreciated the scope of what needed to be done."

"You would think in a correctional setting they'd be acutely sensitive to the heightened risks," Bussert said.

In the interview Friday, Carvajal stood by the agency's decisions to only shut down visitations and slow internal movement in March.

"A lot of folks don't understand you don't just shut down a prison system like that," Carvajal said. "I understand the criticism of the timing on it, but that's where I believe that experience on running prisons — and we know our population, we know what we can and can't do and the right time to do it, and that played a big role in making the decision."

Carvajal said a full-scale lockdown, where inmates would be entirely confined to their cells, is unhealthy and not necessary at this point. He said he feared such a move could also lead to riots, like what happened in two locally run prisons in Washington and Kansas this week.

"I take it very seriously when we're going to put people in their cells and restrict movement. That's not healthy, that's not good either, and I'd like to think that that's the last resort," he said.

He maintained that the Bureau of Prisons has an "ample supply" of personal protective equipment for staff, and said that face masks had been available to the essential personnel that needed them when the virus was in its early stages. They were handed out widely earlier this week after US public health officials recommended their use by the general public.

Carvajal has also faced criticized for continuing to transfer inmates between facilities during the lockdown -- from correctional officers worried about coming into contact with new prisoners and lawmakers concerned about the spread of the virus into their districts -- but he said Friday that it's actually been a tool to help stem of the virus by preventing overcrowding. Still, the number of internal inmate transfers is down by 81% compared with the same time last year, the Bureau of Prisons has said.

Directives from the Justice Department met with mixed results

As the Bureau of Prisons put in place measures to restrict the movement and routines of prisons, inmates and their friends and family members who spoke with CNN said conditions remained dire. Allegations of unhygienic conditions have also been gathered in lawsuits, including one filed this week by the ACLU, demanding the speedy release of certain vulnerable populations.

In late March, a doctor wearing a Tyvex suit, a face shield and a mask told a group of prisoners at the minimum security prison camp in Otisville, New York, that the majority of them could be infected. They were told to keep their cubicles clean.

Grace Razzouk said her husband Sassine, who is incarcerated at Otisville on bribery and tax evasion charges and has a respiratory disease, has begun coughing so badly that he has to use his emergency inhaler three times in one day, compared to that many times in one month. She learned Thursday night that he had been moved to quarantine by the medical staff.

As the number of infected inmates was just starting to rise, Barr issued a directive instructing the Bureau of Prisons to prioritize the release of non-violent prisoners who were vulnerable to the virus and had served a large portion of their sentence.

It's a practice that has been embraced more quickly by state and local prison facilities, where the vast majority of the country's prison population are housed. So far, 886 prisoners have been released to home confinement from the federal system since Barr's directive, mainly from halfway houses.

Razzouk is hoping her husband will be one of the many who will be released early because of his vulnerability to the virus.

At Otisville, where many white collar convicts wait out their sentences, inmates say at least a dozen prisoners have been selected for release.

The results have been mixed. At the Midwest facility, an inmate told CNN the directive had not been communicated to case managers who play a major role in home confinement decisions. Two prisoners were told that the case manager was unaware of Barr's push, with the staff member telling them that "none of you are going home," according to the inmate.

More than two weeks after the virus first showed up in the federal prison system, inmates and staff who had been infected are slowly beginning to recover. Carvajal said that he understands the anxiety among his staff. "We're battling a threat here that is unseen," he said. "That's not normal for anyone."