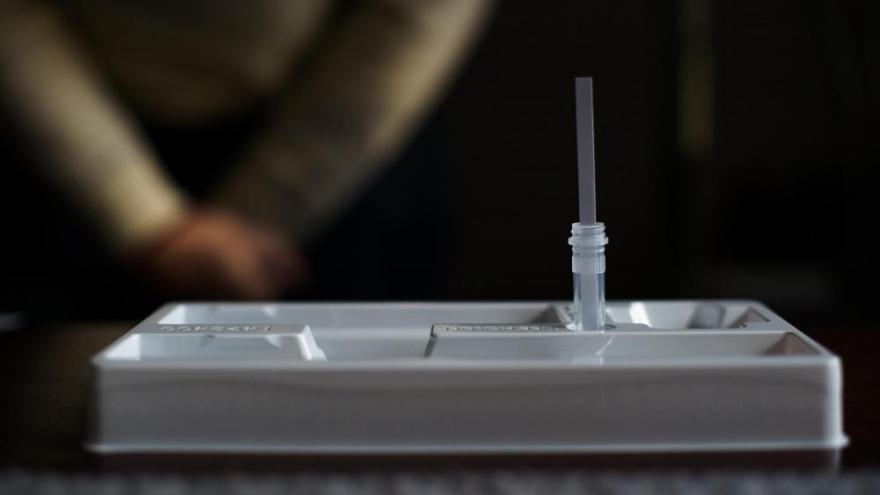 A resident processes a self-administered at-home Covid-19 test, received through a government program, in Easton, New Hampshire, on December 7, 2021.

(CNN) -- Medicare will start paying for home Covid-19 tests purchased at participating pharmacies and retailers, the Centers for Medicare and Medicaid Services told CNN on Wednesday. It anticipates the option will be available in the early spring.

As part of its effort to contend with the pandemic, the Biden administration last month began requiring health insurers to cover the cost of home tests for most Americans with private insurance.

However, Medicare was not initially included in the directive, sparking an outcry from seniors. The 36 million senior citizens and Americans with disabilities in the traditional Medicare program have not been able to get reimbursed.

And the roughly 28 million Medicare Advantage enrollees, who receive Medicare coverage through private insurers, have had to check with their carriers if they would pick up the tab. Many have said they will not because Medicare is not covering the tests.

At issue is that over-the-counter tests have not been covered by traditional Medicare before. CMS told CNN last month that it was exploring ways to add a new payment program so it could expand reimbursement to Medicare enrollees.

Setting up the process takes some time, which is why reimbursements won't start immediately.

"In the weeks ahead, we'll be working diligently on behalf of people with Medicare to set up a process for them to receive free over-the-counter tests through eligible pharmacies and other participating entities," said Dr. Meena Seshamani, director of the Center for Medicare, which is part of CMS.

Have you tried to get a free home test from the federal site? Did it work smoothly or was there an issue? Tell us about it.

How Medicare enrollees can get tests

The shift means that Medicare and Medicare Advantage enrollees will be able to pick up home tests at no cost. The agency will release a list of participating pharmacies and retailers when coverage begins.

Like those with private insurance, Medicare enrollees will not need to visit their doctors or get prescriptions to obtain the free tests. They will be able to get up to eight tests per covered individual per month.

Until then, the agency recommends that enrollees order free tests through the federal program, covidtests.gov, go to free community testing sites or access lab testing with health care providers' orders.

Kathy Pudenz, 66, was surprised to learn last month that Medicare would not pay for the four boxes of Covid-19 tests she purchased at Walgreens pharmacies near her Brownsburg, Indiana, home. Her husband had tested positive so she needed the tests to monitor both of their conditions. Plus, she wanted to make sure she was negative before taking her dog to the vet and seeing her own doctor more than a week later.

"They want the highest at-risk population, where there is the most deaths, to go out in public to get tests or pay for them out of their pocket, which I just thought was ludicrous," said Pudenz, who is enrolled in traditional Medicare.

Senior citizens should not "be treated like stepchildren," said Susan Schmid of Holmes, New York. Many elderly Americans may not be able to go online to order the free tests from the federal government, but they still need protection.

"Of course, we are out in public. We still have to go to stores. We still have grandchildren. We still have children. And we certainly don't want to be isolated," said Schmid, 68, who is covered by traditional Medicare and has yet to receive the free federal tests she requested last month.

Her husband, Steve, was recently exposed to Covid-19 while volunteering at a farm. Now the couple will have to use the one box they secured from their town to test in a few days, before going to their daughter-in-law's baby shower this weekend. They will also see their grandson there, who is too young to be vaccinated.

"We are just kicked to the curb," she said of seniors.