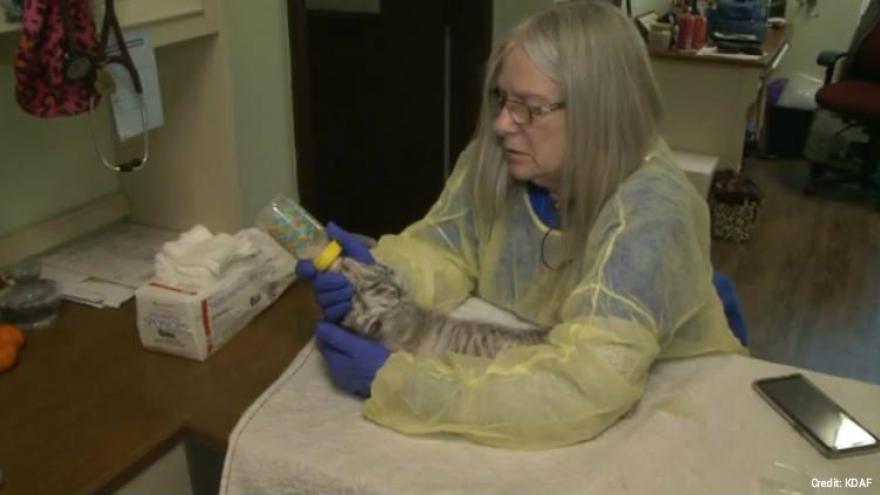 WYLIE, TX (KDAF) -- March 6 was a busy day for the crew at the In-Sync Exotics animal sanctuary in Wylie.

First they welcomed an 8-year-old white tiger, Gus, which they knew would be happening. But, later that day they also welcomed a baby white tiger... which they were not expecting.

Sanctuaries neuter and spay their animals shortly after arrival to prevent breeding, but they can't always tell if a female is already pregnant when they get one. So, they wait for the full length of a normal gestation period before operating just to be safe.

Zahra, a rescue from Colorado who arrived at In-Sync Exotics in mid-January, was about halfway through that 3-month wait when she birthed a single cub.

"It's exciting, it's scary, it's all those things all wrapped up," says the sanctuary's founder, Vicky Keahey.

This is only the second on-site birth in the sanctuary's history and the other was in its first year of existence in 2000. The first was a cougar who is still around.

In addition to the challenge of learning how to care for a newborn tiger, the cub's mother rejected him for an unknown reason. She may have simply not known what to do or might have had a cub taken away or die in the past, so Keahey and Wilson had to become surrogate parents, providing round-the-clock care just like a human baby requires.

As for his name, "Star Wars" fans will like this: Kylo Ren! But, why name him after a villain?

"Nobody knows yet if Kylo Ren is a villain," cautions Keahey, saying the character has a good heart deep down. "Darth Vader was good at the end!"

Kylo will have his own enclosure when he's ready to move out of quarantine at about 3 months old. While you won't be able to see him until then, you can still support him as each admission to the non-profit sanctuary is a donation that keeps the operation roaring, and with 75 other animals living there there's plenty to see!