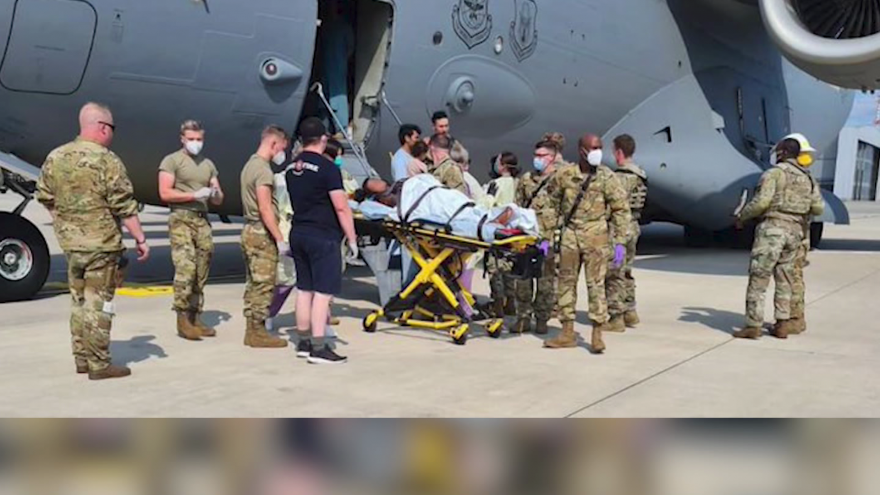 An Afghan mother delivered a baby girl just after touching down at Ramstein Air Base in Germany Saturday aboard a US military evacuation flight. Credit: U.S. Air Mobility Command
By Atika Shubert, James Briggs and Jack Guy, CNN

(CNN) -- A nurse who delivered a baby girl on board an aircraft that evacuated people from Afghanistan has said her team was "expecting the worst, hoping for the best."

The Afghan mother went into labor aboard a C-17 transport aircraft full of evacuees fleeing the Taliban takeover of Afghanistan, US Army Capt. Erin Brymer, a Landstuhl Regional Medical Center registered nurse, told CNN at the United States' Ramstein Air Base in Germany on Monday.

Brymer helped deliver the baby after the plane touched down at Ramstein on Saturday, following a flight from a staging base in the Middle East.

The baby was one of three born during the evacuation from Afghanistan, according to US officials. The commander of US Transportation Command, Gen. Steve Lyons, told reporters at a news briefing Monday that two other babies were born at Ramstein, though he offered no details on where or when they were born.

The flight was part of a chaotic scramble to airlift people out of Afghanistan. Ramstein is one of the largest US air bases outside America and has now been transformed into a temporary transit point for evacuees to the US.

A total of 7,100 evacuees from Afghanistan have arrived at the base so far, the public affairs office at Ramstein Air Base told CNN on Monday. The base is nearing its capacity of 7,500, the office said, after 36 flights carrying evacuees landed in recent days.

Brymer told CNN she's delivered countless babies in hospital conditions, but this was her first "in the wild."

She said her team got notice a plane would be landing in 10 minutes with a mother who had gone into labor.

When the team reached the plane the mother was crowning at the front of the aircraft, surrounded by a group of female evacuees holding up their shawls to protect her privacy. "It was a beautiful sight to see," Brymer said.

The team evaluated the patient and concluded they were "past the point of no return," deciding to deliver the baby right there on the plane. "That baby was going to be delivered before we could possibly transfer her to another facility," said Brymer.

Brymer said she tried to reassure the woman by making eye contact with her and letting her know "that everything is OK and that she can deliver this baby safely." The medical team told her "we were ready for her when she was ready," Brymer added.

The baby was delivered within 10-15 minutes of the aircraft touching down, said Brymer. As the delivery took place, the plane looked "exactly like the photos you see" from the evacuation flights -- packed with hundreds of people, Brymer added.

Asked when she realized things would be OK for the baby and mother, Brymer said: "When the baby came out screaming. And we were able to put her directly on mom's chest and get her breastfeeding right away. I was like 'OK, we're good here.'"

The pilot mistakenly announced that the baby was a boy, and Brymer said she corrected him. "I mean, it's a girl," the pilot then said.

For Brymer, the "entire week has been a whirlwind of emotions," and the team continues to plan for other pregnant women who may require their assistance.

"I actually feel quite honored and humbled to be a part of this mission. And just kind of -- the sheer humanity of this," said Brymer. "I mean, we're people, they're people. We both want the same things, healthy and strong mamas and babies."

Kabul airport has been the epicenter of a desperate scramble for people trying to leave Afghanistan in recent days. On Monday, the number of evacuees inside the facility stood at about 13,000, most of whom are Afghans, a source familiar with the situation at the airport told CNN. The source said the numbers of US citizens at the airport was now in the low hundreds.