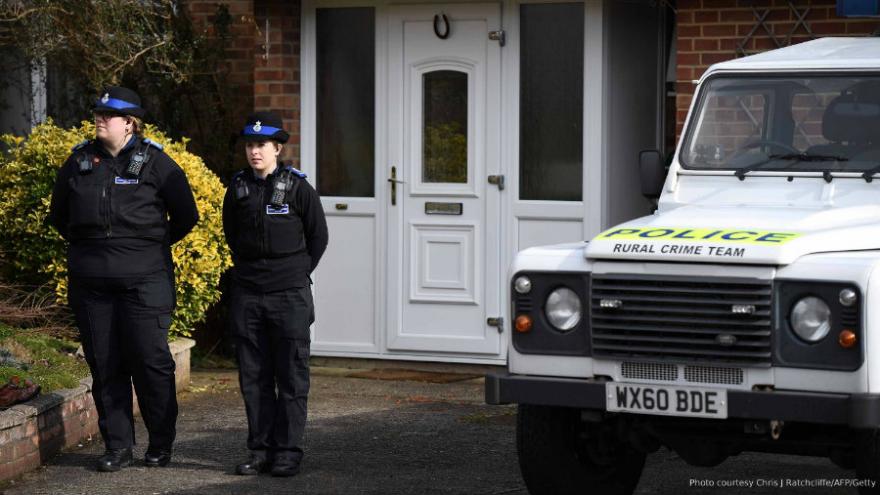 (CNN) -- The British government repeated its claim that Russia was responsible for the Salisbury poisoning after UK scientists said they were unable to determine where the substance used to attack former Russian spy Sergei Skripal and his daughter Yulia was made.

Skripal, 66, and Yulia, 33, were poisoned on March 4 after being exposed to a nerve agent in Salisbury, England. The pair were found slumped on a bench in an outdoor shopping complex after the attack with no visible injuries, according to police. The nerve agent had been placed on Sergei Skripal's front door, police said.

Speaking to Sky News on Tuesday, Gary Aitkenhead, chief executive of Porton Down laboratory said the poisonous substance used to carry out the attack was the military-grade nerve agent Novichok but said scientists did not identify where it was manufactured.

"We have not identified the precise source, but we have provided the scientific info to government, who have then used a number of other sources to piece together the conclusions you have come to," Aitkenhead said.

A UK government spokesperson said in a statement Tuesday: "We have been clear from the very beginning that our world-leading experts at Porton Down identified the substance used in Salisbury as a Novichok, a military grade nerve agent.

"This is only one part of the intelligence picture. As the Prime Minister has set out in a number of statements to the Commons since 12 March, this includes our knowledge that within the last decade, Russia has investigated ways of delivering nerve agents probably for assassination -- and as part of this program has produced and stockpiled small quantities of Novichoks; Russia's record of conducting state-sponsored assassinations; and our assessment that Russia views former intelligence officers as targets."

Putin said there were 20 countries that could manufacture the nerve agent, adding he was "surprised at the speed with which the anti-Russian campaign was promoted and accelerated."

The UK government has long pointed fingers at Russia for the attack against the former double agent and his daughter on British soil.

On Monday, a source briefed on the investigation told CNN that British authorities believe the location of the attack on Skripal's door shows a sophistication that likely had the approval of the Kremlin.

British officials said they believe an attack of this type could only be carried out by someone with key training involving Novichok, a chemical developed by Russia during the Cold War.

There are doubts that rogue agents could have carried out the attack without approval from the top levels of Russian government.

Earlier on Tuesday, a Downing Street spokesman said the UK is responding "in a proportionate way" to Russian aggression. He added that challenges posed by Russia "will last for years."

Downing Street's statement comes after Evgeny Buzhinsky, a former Russian general, told British media the diplomatic fallout from the poisoning could get "worse than the Cold War" and trigger a "real war."

More than 20 nations, including the United States, have backed Britain by expelling over 100 Russian diplomats after the UK government openly blamed Moscow for the Salisbury incident.

Russia has repeatedly denied involvement in the poisoning, with Russian Foreign Ministry spokeswoman Maria Zakharova last week accusing the UK government of seeking to "bring about a totally absurd situation."

The Organization for the Prohibition of Chemical Weapons told CNN an emergency meeting will be held on Wednesday at Russia's request. The Russian Embassy in the UK released a statement on Sunday posing a series of questions to the organization about its knowledge of the investigation.

As the fallout from the incident continues, both Skripal and his daughter remain hospitalized in Salisbury. A statement from Salisbury District Hospital last week said Yulia Skripalwas "improving rapidly" and that Sergei Skripal remains in critical but stable condition.

Zakharova told reporters in Moscow that Britain is breaking international law by refusing to provide information on the case.

"We are witnessing obvious prevention of access for Russian representatives to Russian victims," she said.

On Tuesday, a spokesperson for the UK's Foreign and Commonwealth Office reiterated it was considering requests for consular access in line with its obligations under international and domestic law, which include the rights and wishes of Yulia Skripal.