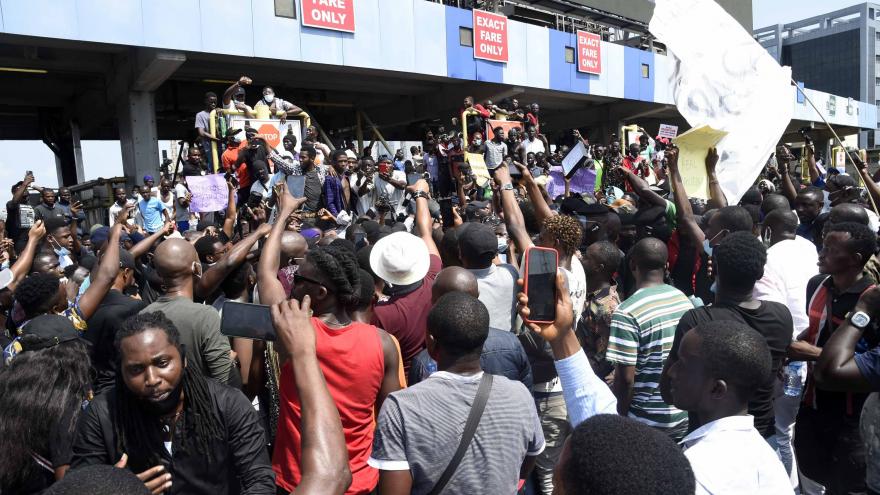 Pius Utomi EkpeiAFP/Getty Images-Demonstrators barricade the road to protest against abuses by the Special Anti-Robbery Squad (SARS) at the Lekki toll Plaza in Lagos, on October 12, 2020.

(CNN) -- Protests against police brutality in Lagos turned bloody on Tuesday despite a state-wide curfew, with eyewitnesses telling CNN that multiple demonstrators have been shot by soldiers.

Demonstrators have taken part in daily protests across the country for nearly two weeks over widespread claims of kidnapping, harassment, and extortion by a police unit know as the Special Anti-Robbery Squad (SARS). Tuesday saw the state governor impose a 24-hour curfew and deploy anti-riot police to the city.

One witness at the protests, Akinbosola Ogunsanya, said the shooting began after the lights were turned off at the Nigerian city's Lekki tollgate. "Members of the Nigerian army pulled up on us and they started firing," he said. "They were shooting, they were firing straight, directly at us, and a lot of people got hit. I just survived, barely."

Ogunsanya added that barricades on either side of the scene were blocking ambulances.

Another witness, Temple Onanugbo, said he heard what he believed were bullets being fired from his home nearby and that the sound lasted "for about 15 to 30 minutes."

Speaking to CNN from the scene of the shooting, Onanugbo said he saw "multiple bodies laying on the ground," when he arrived to help those injured.

CNN has not yet been able to confirm casualties.

The State Government has ordered an investigation into the incident, according to the Lagos Governor's spokesman, Gboyega Akosile. According to a tweet by Akosile, Lagos Governor Babajide Sanwo-Olu has also "advised security agents not to arrest anyone on account of the curfew."

The protests at the Lekki toll gate have been mostly peaceful, with demonstrators singing the national anthem, staging sit-ins, and praying.

Earlier in the day, Sanwo-Olu had imposed a 24-hour curfew, including the closure of all Lagos schools. Only essential service providers and first responders have permission to be on the streets of Lagos, which has an estimated population of more than 20 million people.

"Dear Lagosians, I have watched with shock how what began as a peaceful #EndSARS protest has degenerated into a monster that is threatening the well-being of our society," Sanwo-Olu tweeted as he announced the 4 pm (local time) curfew.

SARS was disbanded on October 11 and a new police unit to replace it will be trained by the International Committee of the Red Cross (ICRC), Reuters reported Monday. Protesters are demanding further protections against the police, including independent oversight and psychological evaluation of officers.

Death and severe injuries amid the protests have been reported since the weekend.

Amnesty International said on its Twitter account Tuesday that it has received "credible but disturbing evidence" of "excessive use of force occasioning deaths of protesters."

A 17-year-old died in police custody on Monday in Kano, a city in the north of the country, after allegedly being tortured, according the human rights group. Many protestors and journalists were assaulted by police and thugs in the capital Abuja on the same day. Videos on social media show dozens of cars belonging to protestors burning and Amnesty International said three people died.

"While we continue to investigate the killings, Amnesty International wishes to remind the authorities that under international law, security forces may only resort to the use of lethal force when strictly unavoidable to protect against imminent threat of death or serious injury," Amnesty also tweeted.

Other videos show a mass breakout of hundreds of prisoners from the Benin Correctional Center in Edo state in southern Nigeria. It is uncertain who is to blame for the breakout, with protestors claiming it was staged by police. The Nigeria Police Force said in a tweet that protestors carted away arms and ammunition from the armory before freeing suspects in custody and setting the facilities alight.

Edo state governor Godwin Obaseki imposed a curfew on Monday, tweeting about "disturbing incidents of vandalism and attacks on private individuals and institutions by hoodlums in the guise of #EndSARS protesters."

Riot police have been deployed across the country. According to a tweet from the Nigerian Police Force on Tuesday evening, the Inspector-General of Nigeria's Police has ordered the immediate nationwide deployment of anti-riot police officers "to protect lives and property of all Nigerians and secure critical national infrastructure across the country."

This story has been updated to remove an incorrect dateline.