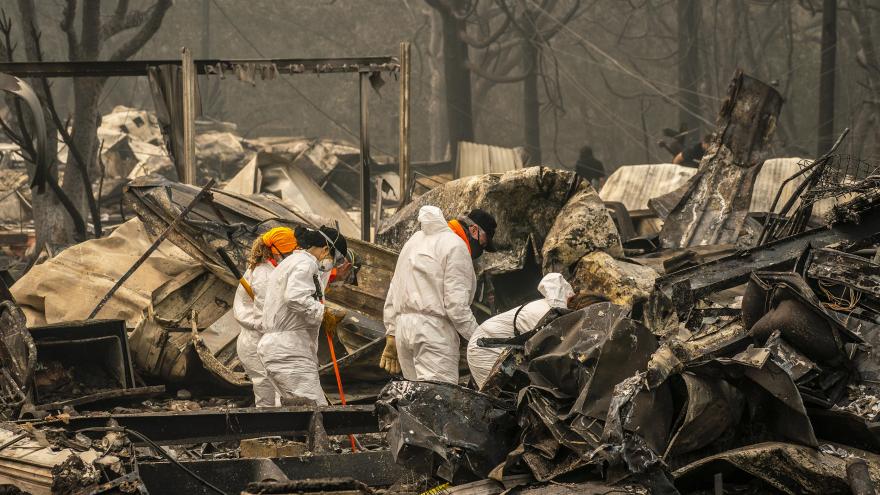 David Ryder/Getty Images-Hundreds of homes in Ashland, Oregon and nearby towns have been lost due to wildfire.

(CNN) -- The blame game over the Oregon wildfires is playing out across social media, and Facebook said Saturday it would remove false claims circulating on its platform.

Law enforcement agencies have been flooded with calls since at least Thursday about online rumors that members of Antifa, an anti-fascist, often far-left-wing movement, were arrested for setting fires across the state.

"Reports that extremists are setting wildfires in Oregon are untrue," the FBI Portland said in a tweet Friday.

Asked why Facebook only began removing posts on Saturday rather than on Thursday or Friday, Facebook spokesperson Andy Stone said the company had been labeling some false posts earlier in the week. He added, "As we continued to hear more from law enforcement and see additional activity related to these claims on our platform, we opted to take further action."

"This is consistent with our past efforts to remove content that could lead to imminent harm given the possible risk to human life as the fires rage on," Stone said about the decision.

Twitter, on the other hand, did not say it would be removing false posts, but instead would be "taking action to reduce the visibility of these Tweets." That includes not amplifying false tweets with its algorithms.

By the weekend, however, posts on both Facebook and Twitter with false claims about the fires had gone viral.

The claims that Antifa set the fires was helped when the anonymous account behind QAnon posted a link to a tweet by Paul Joseph Romero Jr., a former Republican US Senate candidate from Oregon, claiming the Douglas County Sheriff's Office had six Antifa "arsonists" in custody.

It took hours for the rumors to be amplified by QAnon's followers.

Speaking to CNN Saturday, Romero claimed, "My original tweet is not 100% accurate, there is no question about that, but it is mostly accurate."

Romero said he does not plan to remove the tweet.

The Douglas County Sheriff's Office is urging the public to follow official sources of information and local reputable news outlets.

At least eight people have perished in the blazes that have scorched more than 875,000 acres across the state.