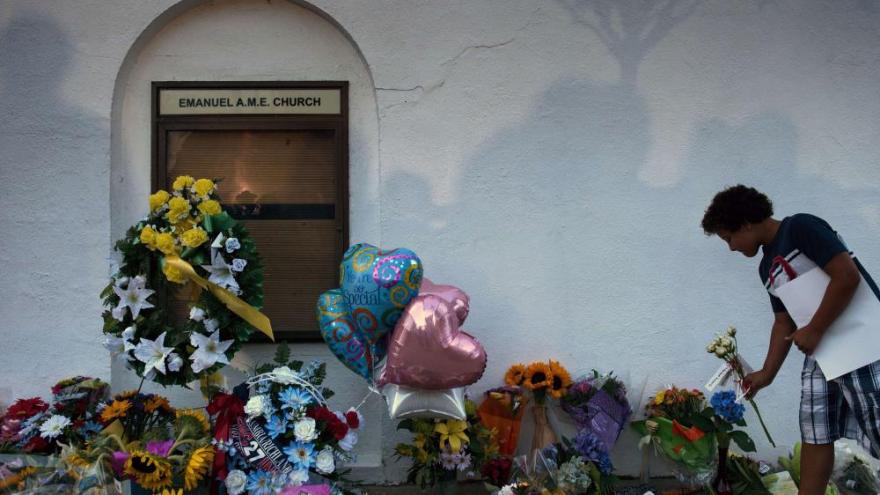 Families of the Charleston church massacre victims have reached a settlement with the Justice Department. Landon Whitchlock, 8, places flowers at a memorial outside the Emanuel AME Church in June 2015.

(CNN) -- The families of nine people fatally shot in 2015 at a historically Black church in Charleston, South Carolina, have reached an $88 million settlement with the Justice Department in their lawsuit over the shooter's weapon purchase, according to agency officials and a news release Thursday.

The widow of the Rev. Clementa Pinckney thanked supporters and those involved in reaching the settlement.

"Even though Clementa is not with us here physically, I know spiritually he is with us, and I know that he's smiling down on us right now," Jennifer Pinckney said Thursday.

"He will be missed, along with all the others that didn't survive that night."

'No one disputes' the shooter shouldn't have been able to buy a gun, court says

A federal appeals court ruled in 2019 that families of those slain could sue the US government for negligence over lapses in the FBI background check that allowed the shooter to buy the semiautomatic pistol used in the massacre.

Dylann Roof, an avowed White supremacist, was convicted of federal murder and hate crimes charges. He was sentenced to death in 2017 and has appealed his conviction.

Before the massacre, Roof had been arrested on a drug charge that should have prevented him from purchasing the gun had the charge been properly reported during the background check, the appeals court found in 2019.

Had the background check been performed properly, "no one disputes" it would have kept him from buying the gun, the court wrote.

Shortly after the Charleston massacre, federal lawmakers made a bipartisan demand for tough background checks on gun purchases.

The House passed the Bipartisan Background Checks Act of 2021 in March. But the bill has not gone before the Senate.

After an Office of Inspector General's audit in July, the FBI said it would consider modifying the background check system known as National Instant Criminal Background Check System (NICS) after an 18-year-old Florida resident traveled to Colorado in 2019 to buy a shotgun.

The NICS system, which is used by licensed federal firearms sellers and dealers, did not have the capability to verify the buyer was a resident in Florida, which prohibits the sale of firearms to anyone under 21.

CNN has reached out to the FBI for comment on the NICS modification consideration.